Samsung, the South Korean giant, devised a stretchable electronic skin that could identify your heartbeat at a particular rate. The electronics consumer company proves that it is not only excellent in creating world-class smartphones, appliances, and smart home devices, but also it could develop something that people who are suffering from health problems could use. 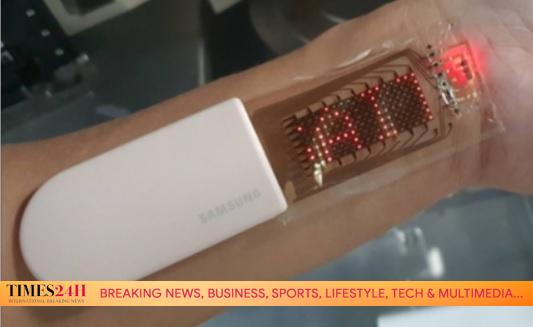 Korean tech titan, Samsung is not only limited to releasing the next-gen smartphones and foldable in the market. Of course, a lot of huge companies nowadays have been testing their products because of the surging public demand, especially because many people are only staying inside their house.

For sure, the South Koreans have good news to hear from Samsung which will not cover a new Galaxy release or Galaxy Tab, but rather a concentrated invention that makes use of an expandable electronic skin that could display the human’s heart rate.

Earlier this week, Engadget reported that the mobile phone maker has progressed to bring a top-class, state-of-the-art health device that comes like an electronic skin with an OLED screen and an integrated heart-rate monitoring feature which is stretchable for nearly 30%.

Since Samsung is known for its grade-A mark when it comes to its foldable, we could discern that the company has been doing the entire work of strengthening this portable electronic device which comes with an elastic screen suitable. Besides its top-notch durability, it’s even amazing to know that it could be expanded up to 1000 times.

According to Explica’s report on Tuesday, June 8, the Samsung Institute of Advanced Technology (SAIT) researchers were assigned to design the health device’s flexible screen which could be stretched depending on the user.

Moreover, the company is also proud of its achievement of “replacing” the plastic commonly used in regular expandable displays. Instead, they tweaked the molecular composition of the material used in the electronic skin development so that it would be much stronger and stress-free.

Also, the researchers have made use of the “stretchable electrode” material which makes the device resistant to several deteriorations that take place in the elastomer area. The feature could also be compared to smartwatches which also have health-tracking sensors to monitor the person’s heart rate and other health conditions.

Regardless of the user’s skin, the electronic skin device will suit everyone so it could perform continuous monitoring of the patient’s heartbeat with high precision. The team has also reportedly picked up a signal from the heartbeat that is 2.4 times stronger than what the silicon sensor could detect.

Samsung notes that it will be adding another set of health monitoring features which include blood pressure reading, SpO2 monitoring, and electromyogram evaluation.

US lays out new guidelines for vaccinated international travelers