Chinese Airport Toilet Allegedly Contains Hundred-Million-Year-Old Fossils: Is This Legal? Here’s How Expensive It Is

A Chinese airport has a toilet that allegedly contains fossils that are hundreds of millions of years old. This shocking discovery was first found by a professor in a TV program, revealing that the material used to build some of the toilet’s sinks are filled with fossils. 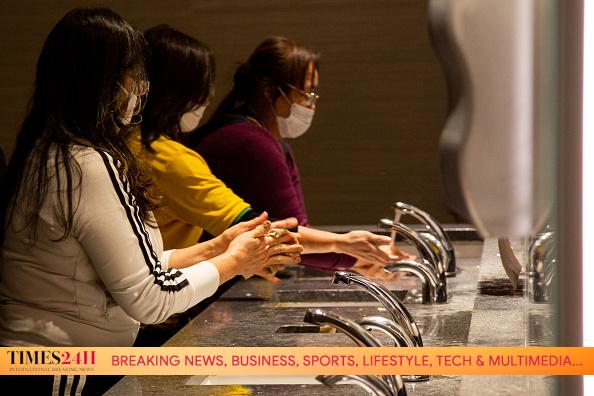 (Photo : Photo by Carol Coelho/Getty Images)
Passengers wear protective face masks in a toilet after arrives in Houston International Airport on March 14, 2020 in Houston, Texas. Passengers are wearing masks to avoid the spread of the coronavirus (COVID-19).

Shen Shuzhong, a professor from Nanjing University’s School of Earth Sciences and Engineering, discussed the major species extinction events in the Earth’s history.

During a science education program at state broadcaster CCTV, he revealed some photos of the Longdongbao International Airport toilet washbasins, which is located in Guiyang, Guizhou.

“You can see the white patterns in the construction materials of the sink. These patterns are the fossils, belonging to the brachiopod fossil category which dates back to hundreds of millions of years ago,” said the professor.

According to Live Tube’s previous report, the hundreds of millions of years old fossils trapped within the Chinese airport’s popular toilet contain many secrets of the Earth’s past. (Photo : Photo by Tomohiro Ohsumi/Getty Images)
A monitor displays airline departure information at Narita airport on January 24, 2020 in Narita, Japan. While Japan is one of the most popular foreign travel destinations for Chinese tourists during the Lunar New Year holiday this year, Japan reported two cases of Wuhan coronavirus infections as the number of those who have died from the virus in China.

Shen added that these secrets include what temperatures the seawater was measured at and what was the environment back then. However, the main goal of the professor is to only inform his audiences.

He said that it was unexpected that his brief mention of the fossils would trigger discussions among the general public and geology experts. However, some of the people even got excited to visit the Chinese airport just to take some photos of its toilet washbasin.

On the other hand, Chen Shangbin, a geology professor from China University of Mining and Technology in Xuzhou of Jiangsu, said Shen’s goal is to inform the public that they can still encounter fossils in real life, in many ways they can’t imagine.

The Chinese airport’s use of fossils in its toilet washbasin is legal since the Guizhou is often dubbed an ancient creatures kingdom for its rich fossil finds. South China Morning Post also reported that some researchers even said that the ancient remains discovered in the region cover almost every category of fossils.

Right now, the popularity of this unusual toilet surged from $31 per square meter up to $154. If you want to know more details, all you need to do is click here.

For more news updates about this Chinese airport and other similar stories, always keep your tabs open here at TechTimes.