A luxury cruise on Red River with a capacity of 99 passengers has been inaugurated in Hanoi for the first time.

According to President of the Hanoi Travel Association Phung Quang Thang, Red River plays an important role in the spiritual life of the Hanoi people. “Then a luxury cruise with tailor-made tours to explore this sacred river is a brave idea. It not only entertains visitors but also helps them learn about the culture and history of Hanoi, as well as the daily life of the residents living on the banks of the river.”

“Red River is a valuable tourism resource, so more new cultural tourism products need to be created to exploit this potential,” he added. 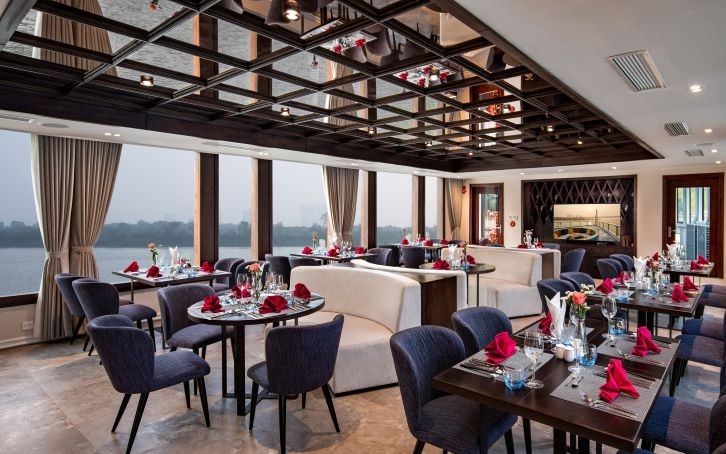 A representative from Jade of River Cruise said the tour on the Red River could inspire other operators to launch more products on the river.

“Red River has great resources for tourism, while exploitation is disproportionate to its potential,” he added.

Red River cruises take travelers along the stream to enjoy tranquil spaces and an escape from the hustle and bustle of Hanoi.

Jade of River cruise departs daily with specific tours such as “Watching the sunrise on the Red River”, starting from 7:00 AM to 9:30 AM with breakfast included; the “Welcome to the Sun” tour with lunch; and the “Magnificent Sunset” with a great music party and dinner banquet.

The Red River enters Vietnam in the province of Lao Cai and passes through the capital of Hanoi before emptying into the Gulf of Tonkin. The reddish brown, heavily silted water gives the river its name.

The Red River is notorious for its violent flooding with its seasonally large fluctuations in volume. Intense seasonal flooding is exacerbated by erosion, development and pollution. The delta is an important agricultural area of ​​Vietnam with a vast area devoted to rice. The land is protected by an extensive network of levees and levees.

By Jenna Duong @ The HanoiTimes