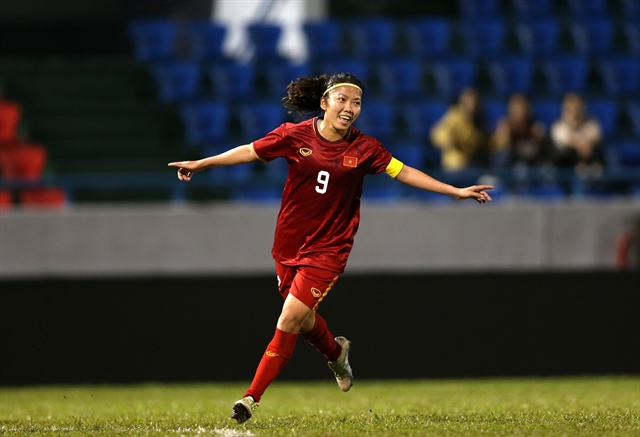 The past year has been full of tough challenges, but it has been a good year for Cù Thị Huỳnh Như who has been getting stronger and stronger and aiming for even higher goals next year.

The captain of the women’s soccer team is now gearing up for the biggest dream of his career: winning a ticket to the 2023 World Cup.

“Despite the year of the pandemic, I was lucky to have had the opportunity to participate and I am proud that my club HCM City won trophies in both the National Cup and the National Championship,” said Như, who was voted the most valuable last tournament player. for the fourth time in a row and became the top scorer with seven goals.

“After five months of absence due to COVID-19, our results have been amazing. These national competitions are also a good chance for us to prepare for the Asian Cup,” said Nho, who has just returned from a month of intense training in Spain. , with his teammates in the national team.

She is pleased with her performance in Europe, providing two assists and scoring one of three friendlies in Spain in which Vietnam won two and drew against local women’s clubs.

The results have boosted her confidence ahead of the upcoming 2022 Asian Women’s Championships in India, which will run from January 20 to February 6, serving as a qualifier for the 2023 World Championships in Australia and New Zealand.

In India, ASEAN champion Vietnam is in Group C along with Japan, South Korea and Myanmar, with the former two being considered leaders who have dominated the continent for many years. Japan are the reigning champions. 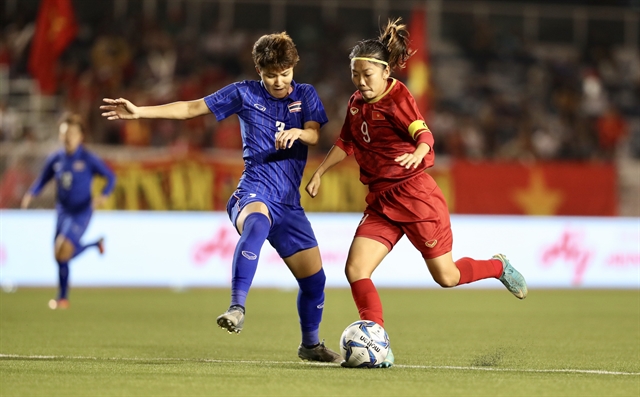 The top five teams will qualify directly for the World Cup through play-off stages, while the other two will advance to the inter-confederation play-offs.

Despite being in the death group, Nho is positive and believes Vietnam has a great chance of reaching the first World Cup in its history.

“After the draw, I was a bit disappointed because we are back in a difficult group. I don’t understand why we often get such a bad draw,” she said.

“Japan and South Korea are strong teams with discipline. They have a lot of young players in their squad. We need to find suitable tactics against them. let’s. There is a chance, albeit a tiny one.

Nho said Vietnam was aiming for at least three points against Myanmar.

“I want to score goals myself. And then wait for the results from other groups to see if we can secure a place in the playoffs, ”she said.

“At the 2018 Cup, we were in a tougher group. The players were young, inexperienced, they lacked understanding. Now we are different, we have greatly improved.

“After many years of working and playing with each other, we believe it is time to win a place at the World Championships. We will try at every training session, unite and never give up. We’ll manage.”

The Asian tournament will be held as part of the traditional Lunar New Year festival in Vietnam. This is the most important holiday and the time when the family gets together. Wherever they are, people are expected to be at home to celebrate the festival with their families. But Nho and her teammates will have national duties.

“Most of the year I’m away from home, but I’ve never celebrated Tet (Lunar New Year holiday) away. I can’t imagine how it will feel. I think my parents will be a little sad because I can’t go with them to visit relatives as usual,” Nho said.

“But this is a national duty. We are leaving to fight for an honorable goal: the World Cup.”

Tet this is also the time when she faces the difficult question of when she will settle down and start a family. But Nho, who turns 30 in November, doesn’t have a good answer as she wants to contribute to the nation. 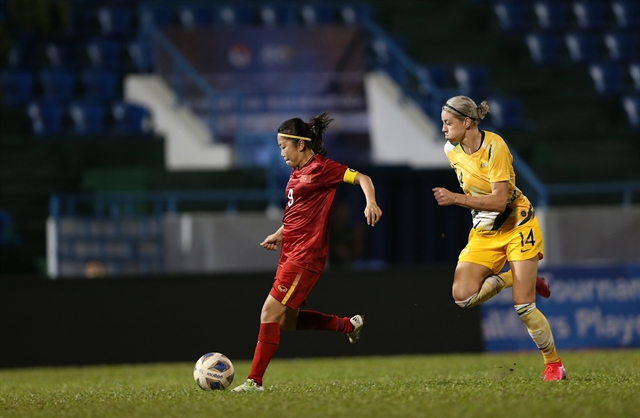 Vietnam striker Cu Tho Huenh Nho (left) runs away from Australian defender Alana Kennedy during the playoffs for the Olympic qualification in Tokyo 2020. The Vietnamese lost 2–1, but Nho made history by scoring the first goal for Vietnam in the Olympic playoffs. Photo courtesy of the WFF

“My family asks me a lot. And I’m sure that every girl is asked the same question. I had my first love when I was at school. But I’ve been single for many years. I care more about my love story,” she laughed.

“It’s not because football prevents me from loving someone. In fact, I didn’t feel really moved or in love with anyone. At this time, I had other plans, including those that I had set from my early days in football. I am determined to complete them all before thinking about my personal life.”

Như was one of three Vietnamese players invited to compete in Europe in 2020.

The Portuguese team Lank FC completed all the paperwork to get them, especially Như, to play in the Campeonato Nacional III third division. However, at the last second, Nho decided to stay at home, missing her chance to become the first Vietnamese female player to compete in Europe. 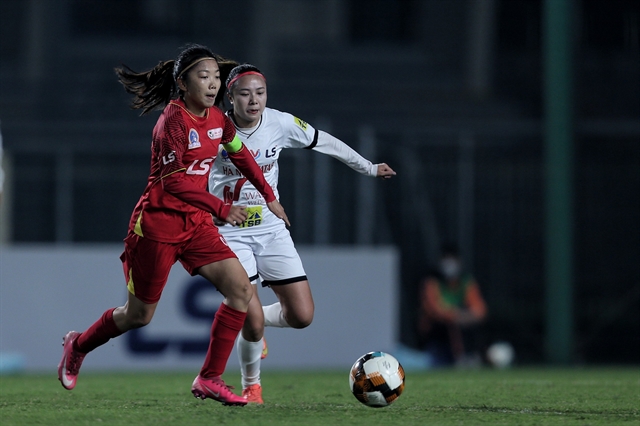 One of the reasons for her decision was the coronavirus pandemic, which hit Portugal hard at the time, with over 560,000 cases and over 9,000 deaths.

“It was a really great opportunity for me to try my hand at quality competition. I would love to go and my coaches and family were also supportive. However, the pandemic spread quickly,” Nho said.

“If I could go there, I would definitely open a new chapter in Vietnamese football by opening the door to the world for our female players.”

The more important reason was that Nho still had important plans that would be thwarted if she went to Portugal.

It was really difficult to find a flight back to Vietnam and Nho would have been quarantined, which would have hurt her fitness ahead of the Asian Cup and the 31st Southeast Asian Games.

The upcoming Games will be Như’s last regional tournament and Như wants to help Vietnam win the title on home soil.

“I want to be a member of the Vietnamese team to play in the World Cup. This is my biggest dream!” said Nho, who is a top nominee for the Ballon d’Or for her performances in 2021. VNS