Will anti-incumbency be the joker in the Kerala poll? 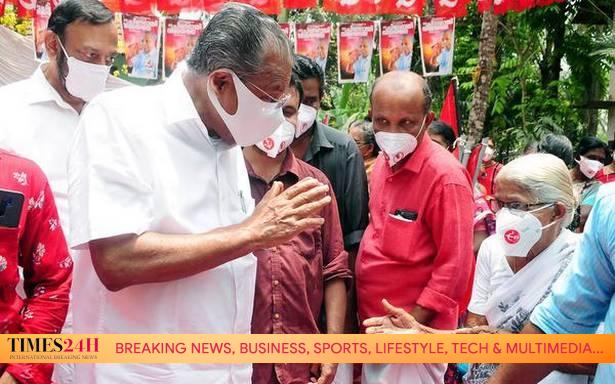 High voltage campaign of the LDF has eclipsed the UDF, beset by internal fissures

Even as several pre-poll surveys indicate a continuity of the CPI (M)-led Left Democratic Front (LDF) rule in Kerala, questions are also raised about the presumed watershed electoral politics in the State. But a silent undercurrent of anti-incumbency appears to be prevailing among the voters.

Rarely has the electorate rewarded incumbent State governments, especially in Kerala, with consecutive terms in recent times. Either it is the Congress-led United Democratic Front (UDF) or the Left alliance. This see-saw voting pattern has been seen in the State since the 1982 elections. The predicted continuity of the LDF government headed by veteran CPI(M) leader V.S. Achuthanandan in the 2011 elections also failed to materialise.

This time, in the absence of a clear wave for or against either of the fronts has already given an impression that the Left parties experimenting with 11 coalition parties is set to retain power. One of the factors cited is the victory of the LDF in the three-tier local body polls in December 2020. Thus, triggering a logic that there is no anti-incumbency against the government.

But then it remains to be seen whether the same narrative will work in the Assembly polls being played in a wider canvas and also in a different political matrix.

“Yes there is a silent anti-incumbency working against the Left alliance. But the aggressive publicity blitzkrieg focussing on social security schemes and pensions overshadowed the anti- incumbency. At present the electoral picture is still hazy,” Hameed Chennamangaloor, political analyst and social critic, says.

In the local body polls, the LDF secured leads in 103 out of the 140 Assembly segments. Its rainbow coalition with the entry of the Kerala Congress (M) and the Loktantrik Janata Dal that abandoned the UDF, and the formal induction of Indian National League (INL) helped the Front reap rich dividends. Besides, the Left parties have also highlighted the alliance of the Congress with the Welfare Party of India, the political arm of the Jamaat-e-Islami Hind in the polls.

The local body polls were a major electoral reversal of the outcome of the 2019 Lok Sabha polls when the Congress- led coalition won 19 out of 20 seats. The sweep in the local body polls came despite the government facing serious allegations of nepotism and backdoor appointments and investigations by Central agencies into multiple scams including smuggling of gold through diplomatic channel.

Mr. Chennamangaloor says that the opposition Congress party has been unable to mount a serious challenge in the run-up to the polls.

“It has been ineffective in projecting a strong leader to steer the campaign even though Leader of the Opposition in the Assembly Ramesh Chennithala levelled serious charges of corruption against the government. At the same time the CPI (M) with its well-equipped machinery orchestrated Chief Minister Pinarayi Vijayan as a super-hero to handle any situation,” he points out.

So far the ruling party has been able to win political points and has controlled the optics of the poll campaign. Many also believe that a continuation of the Left government will help the dispensation concentrate more on infrastructure projects with longer gestation periods.

The Congress party which delayed finalisation of the list of candidates has been hamstrung by organisational weakness.