Đông Triều Town, the eastern gate of northeastern Quảng Ninh Province, has long been known for its coal and pottery industries. Visiting here, travellers are not only overwhelmed with the natural landscape, historical temples and pagodas but also with unusual cuisine bearing its own identity.


Rươi (clam worm) is the main ingredient of many dishes, of which chả rươi (fried clam-worm nugget or pancake) is considered the most famous dish in the area.


The clam worm is a small creature, which usually lives in brackish water areas or rivers. In Quảng Ninh, they are only found in Đông Triều Town, distributed mainly in the Đá Bạc, Đạm Thủy, Cầu and Cầm rivers.


The clam worm season is around October when they often float on the water surface, so the locals just need a net to catch them.


Đông Triều clam worms are usually large in size, fresh and delicious. When eaten, they have a fleshy, fatty, slightly greasy taste. They are known for being nutrient-rich.


To prepare the dish, people choose fresh clam worms that are pink or brown in colour. Clam worms are cleaned and blended with eggs, pork mince, spices, ginger and some dried tangerine peel, which are good for digestion and can help balance the taste of the dish. Next, the mixture is deep-fried in a hot pan until well-cooked. 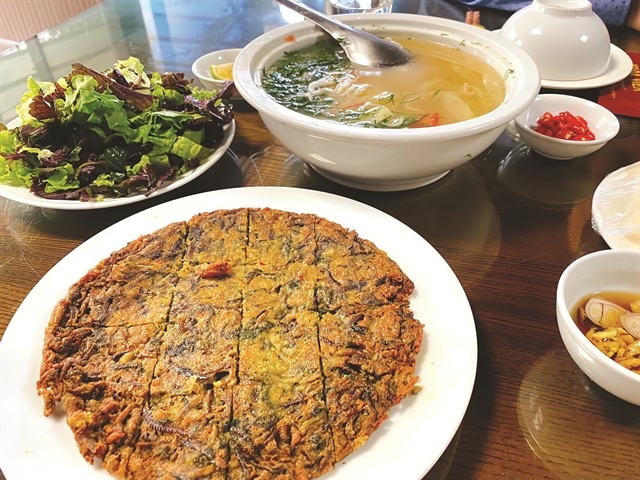 
The dish boasts a crisp yellow colour without being dry, and a pleasant tangerine aroma. To enhance the unique flavour, the dish is usually served with hot rice, fresh vegetables and fish sauce.


Ngần is a small cartilaginous fish, about 8-10cm long. The body of the fish is white with eyes like tiny black dots.


The fish is only available in season. February is when it tastes best. According to locals, the fish spend a long time starving in the winter and only in the warm spring do they find the food that gives the flesh a slight savoury taste and firmness.


It can be cooked in many different dishes, but the tastiest is sour fish soup (canh chua cá ngần). 
The recipe for sour Ngần fish soup is simple. First sauté onions in a hot pot, then add thinly sliced tomatoes and stir-fry. Prepare a suitable amount of water into the pot, bring to a boil and then drop in some sliced ginger, thinly sliced pineapple, green tamarind puree, chili peppers and a few tomatoes, along with some sliced Indian taro.


Bring to a boil again, then add the Ngần fish until the water boils, then skim off the foam. Season to taste with finely chopped onions and dill, and add a little more pepper to flavour the soup.


The fish soup can be eaten with hot rice or vermicelli, but is best enjoyed with raw vegetables such as lettuce, morning glory, banana flower, basil and coriander.


Because the quantity is limited and only available in season, Ngần fish is a favourite food of many visiting Đông Triều.


A portion of sour Ngần fish soup costs about VNĐ70,000 depending on the size.


When in Đông Triều, diners can enjoy the sour fish soup from restaurants or buy raw fish to cook at home for about VNĐ300,000 for 500g.


In Việt Nam, there is a folk saying “Cua tháng ba, cà ra tháng tám” (Crab in March, Cà ra in August), highlighting the “cà ra season” according to the lunar calendar.


Cà ra, a species of freshwater crab also known as hairy crab, lives only in natural freshwater habitats and rivers.


The section of the Đá Bạc River flowing through Yên Đức Commune, Đông Triều, Quảng Ninh is the ideal place for cà ra. The crab is in season from the end of September to November when most appear at the sluice gates where water leads from the river to the lagoons. 
Cà ra crabs usually make caves in deep water at the sluice gate. The species is nocturnal and eats molluscs and small fish. People drop traps on the riverside from noon, then lift the traps next morning to harvest.


These hairy crabs can be cooked in various high-nutritious dishes such as fried cà ra, cà ra soup or cà ra hotpot.


The hairy crab has high calcium and mineral content, a rich taste and highlights the unique flavour of Đông Triều cuisine. VNS