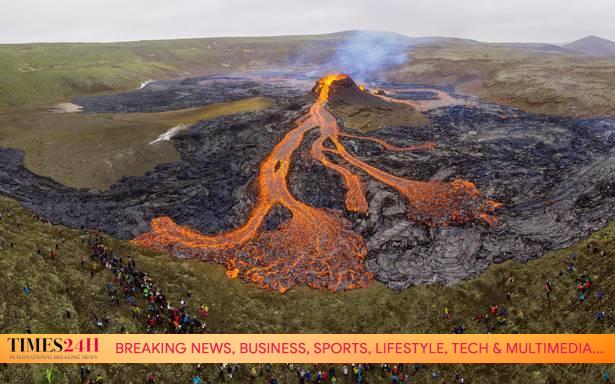 In March, Iceland witnessed the awakening of a volcano near its capital Reykjavik, for the first time in 900 years

Streams of red lava bubbled and flowed out of a fissure in a valley in Geldingadalur, close to Mount Fagradalsfjall on the Reykjanes peninsula in southwestern Iceland.

As the lava flow slowed under rain showers, a blue gas plume and a vapour cloud rose from the site and experts said it posed no danger to people.

The eruption occurred on March 19, lighting up the night sky with a crimson glow as hundreds of small earthquakes shook the area.

The Icelandic Meteorological Office said the eruptive fissure measured approximately 500 to 700 metres and the lava area was less than one square kilometre, with small lava fountains.

The eruption took place in the Krysuvik volcanic system, which does not have a central volcano. The Krysuvik system has been inactive for the past 900 years.

The last eruption on the Reykjanes peninsula dates back almost 800 years and lasted about 30 years, from 1210 to 1240.

But the region had been under increased surveillance for several weeks after a 5.7-magnitude earthquake was registered on February 24 near Mount Keilir on the outskirts of Reykjavik.

Since then more than 50,000 smaller tremors had been registered, and magma was detected just one kilometre under the Earth’s surface in recent days near Fagradalsfjall.

Iceland has 32 volcanic systems currently considered active, the highest number in Europe. The country has had an eruption every five years on average.

The most recent eruption was at Holuhraun, beginning in August 2014 and ending in February 2015, in the Bardarbunga volcanic system in an uninhabited area in the centre of the island.