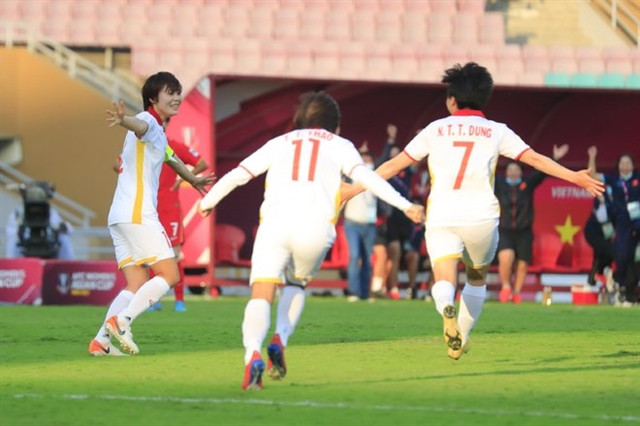 NAVI MUMBAI — The Việt Nam national women’s team were knocked out of the Women’s Asian Cup after losing 3-1 to China in the quarter-finals on Sunday.

Had Việt Nam won they would have directly qualified for the FIFA Women’s World Cup in Australia and New Zealand next year, however, all hope is not lost as they have a second chance of qualification through winning the repechage round.

Chung’s players surprised everyone at the Dy Patil Stadium by taking an early lead. A great counter from Việt Nam made the Chinese defense fumble and Nguyễn Thị Tuyết Dung capitalized with a great shot from outside the box.

China piled on the pressure at 1-0 down, but Việt Nam stayed strong and were deadly from the counters and could have doubled their lead if Phạm Thị Yến and Nguyễn Thị Vạn had been more precise.

At the 25th minute, Việt Nam went down temporarily to 10 women after an injury from Nguyễn Thị Bích Thùy. China took advantage and equalized through Wang Shuang’s tap in.

Seeing a chance for his team, Chung brought Chương Thị Kiều and Huỳnh Như in at the 35th minute to help strengthen the defense and be more proactive in attacks. Việt Nam held on and ended the first half 1-1.

In the second half, a different China came out to play, and the quality of their players made the difference.

A great turn and shoot inside the box by Wang Shanshan helped the Steel Roses take the lead in the 52nd minute, and Tottenham Hotspur Women’s Tang Jiali doubled their lead a minute later.

Being down by two goals, coach Chung subbed out his key players to rest for the repechage playoffs. Việt Nam protected Trần Thị Kim Thanh’s goal and played the offside trap perfectly.

When everyone thought the match was over, in a rare attack on China’s six-yard box Việt Nam were awarded a penalty after a handball by Li Mengwen, but Bích Thùy could not convert and the match finished 3-1 to China.

Việt Nam were eliminated from the Women’s Asian Cup, but are still in contention for a World Cup place should they place first in the repechage. — VNS