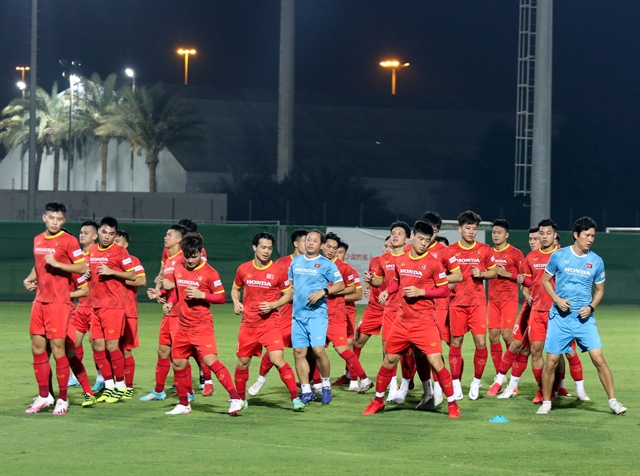 The Việt Nam national team during their first training session in the UAE for their crucial match against China. Photo courtesy of VFF


HÀ NỘI  The Việt Nam national team are in the final stages of preparation for their decisive match against China in the UAE on Friday.


Hoàng Anh Gia Lai’s star Nguyễn Phong Hồng Duy said that, despite languishing in 5th place in Group B, the team will fight for their first three points of the final round of World Cup qualifiers.


“They are a strong team but we will do everything we can to get a win,” Duy said.


“We’re prepared as a team and have studied our opponent carefully. We have been focussing on recovery after training and helping each other to improve in this high-pressure environment.”


“The first day in the UAE was a bit hot but the whole team are ready for the upcoming match. The time difference doesn’t matter much because we have played here before.”


“At this stage every opponent is strong, but we will play our best to satisfy the fans,” said the 25-year-old player.


After the 0-1 loss against Australia, Việt Nam’s first-choice shot-stopper, Đặng Văn Lâm, suffered a serious shoulder injury in training with his club Cerezo Osaka. He is expected to be out for several months and may require surgery.


Lâm’s misfortune opens the door for Viettel’s Trần Nguyên Mạnh to prove his worth once more, in one of Việt Nam’s biggest games this season. This will be Mạnh’s first appearance in two years; for Mạnh, there will be no better comeback than a solid performance.


“After two years I finally have a chance at the national team. It’s wonderful.


“Of course, Lâm’s absence is a great loss but I will do my best for the team.


“In the first two days I couldn’t keep up the intensity in training. But now I have found my feet and regained my confidence, and I’m ready to show what I can do on the pitch.


“There is always motivation to improve myself. It’s hard to talk with any certainty about my position in the team — it’s a very competitive environment. Focussing on myself and doing my best are my main priorities at the moment,” Mạnh added.


After two matches in the final round of the World Cup qualifiers, Việt Nam are fifth and have yet to win a point.


The match against sixth-placed China on October 8 is a decisive match for the World Cup dreams of Việt Nam. A win could see them move up to third in Group B and the chance to qualify through the 4th round play-off. VNS