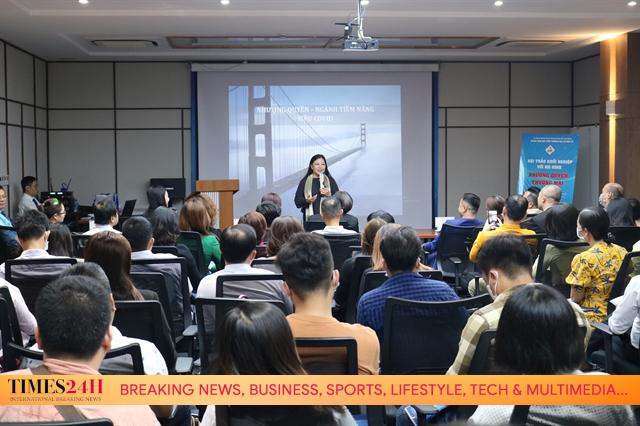 Nguyễn Phi Vân, founder and chairwoman of the Retail and Franchise Asia and founder and executive member of World Franchise Associates, speaks at the ‘Start your own business with franchise model’ seminar organised by the HCM City Investment and Trade Promotion Centre in HCM City. Photo courtesy of the centre

HCM CITY — Việt Nam will become an attractive destination for franchising businesses after the pandemic ends, experts have said.

Nguyễn Tuấn, deputy director of the HCM City Investment and Trade Promotion Centre (ITPC), told the ‘Start your own business with franchise model’ seminar in the city last week: “With its positive economic growth rate last year and a population of nearly 100 million, the future of franchising looks promising in Việt Nam.”

Tuấn said, “Besides bringing huge benefits to franchisors, the model also minimises the risk to franchisees.”

Nguyễn Phi Vân, founder and chairwoman of Retail and Franchise Asia and founder and executive member of World Franchise Associates, said the franchising industry contributes 5-10 per cent of GDP in countries where it is developed.

In the US, where it originated, the figure is 5.1 per cent, and it is 10 per cent in Canada, 9 per cent in Australia and 9.7 per cent in South Africa, she said.

In Asia, franchising is strongest in South Korea (7.8 per cent of GDP), followed by Malaysia (6.3 per cent), the Philippines (5 per cent) and Singapore (3 per cent).

In Malaysia it has been chosen by the government as a long-term strategy to develop SMEs — by exporting business models and brands instead of exporting goods, Vân said.

After the pandemic passes, franchising has the potential to develop strongly, she said.

But, to be successful, franchisees need to make sure they have good business plans and management, she said.

Vietnamese franchisees invest a lot of money to buy a franchise but not to build a management team to run it, she revealed.

To have a sustainable model, businesses must focus on brands and the business model, the operating platform, personnel training, supply chain, and technology platform, she added.

The seminar was organised by the HCM City Investment and Trade Promotion Centre. — VNS