USGS ShakeAlert System Arrives in the US: Here’s How It Warns You About Earthquakes

USGS (the United States Geological Survey) has developed new software that could detect upcoming earthquakes. This new system called ShakeAlert is now available in the U.S. (Photo : Photo by Getty Images)
A women wears a mask while uses iPhone pass the crossroads on May 11, 2020 in Wuhan, China. The government has begun lifting outbound travel restrictions after almost 11 weeks of lockdown to stem the spread of COVID-19.

To make this innovation a reality, USGS decided to collaborate with West Coast to roll out the new system in the United States, marking ShakeAlert’s debut.

“USGS science is the backbone of hazard assessment, notification, and response capabilities for communities nationwide so they can plan for, and bounce back from, natural disasters,” said USGS Acting Director David Applegate.

“Systems powered by ShakeAlert can turn mere seconds into opportunities for people to take life-saving protective actions or for applications to trigger automated actions that protect critical infrastructure,” he added.

According to EOS.Org’s latest report, the new ShakeAlert system has expanded to more than 50 million people on the United States West Coast. Thanks to this extension, it now covers one of the most seismically hazardous regions of the U.S.

Experts said that this new software is essential since a major earthquake in one of the West Coat’s largest cities, specifically Los Angeles, San Francisco, Seattle, and Portland, could endanger more than millions of people, as reported by USGS’s official website. 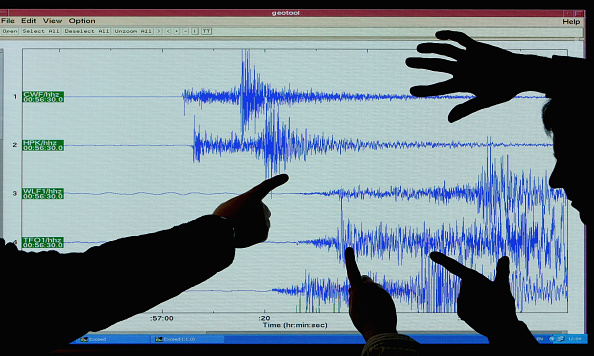 (Photo : Photo by Jeff J Mitchell/Getty Images)
Staff at the British Geological Survey, in Edinburgh look at the graph showing the earthquake which occurred at Market Rasen in North East Lincolnshire February 27, 2008 in Scotland. The tremor the biggest in the UK for nearly 25 years was felt by people as far away as Cumbria and also in the Midlands and London.

Also Read: Biden Climate Change: Hamburgers to Continue Meat Use After Fake News in Social Media About US Going Vegan

To help them avoid any upcoming earthquake, the USGS’ new advanced system will send them a warning before, during, and after an earthquake. It will specifically send the message “Earthquake Detected! Drop, Cover, Hold on. Protect Yourself.”

On the other hand, ShakeAlert also notifies the user if they are currently in the affected area of an earthquake of around magnitude 5 and above. USGS also explained that it uses a group of sensors to detect strong shaking activity.

Once it detects an unusual behavior in the Earth’s mantle, it will then send the information to a processing center, which will send the alerts to the people in the affected areas.

Furthermore, users can also use the so-called MyShake app, which is currently offered by Google Play Store and Apple’s App Store. This application will send you an alert for incoming earthquakes.

Experts explained that it works like the Wireless Emergency Alerts (WEA) system, which is also used by ShakeAlert. Compared to USGS’ new system, the MyShake app only identifies smaller earthquakes, which is around 4.5 magnitude and above.