USAF’s ‘Baby’ C-17 is a Miniature US Cargo Plane, Which Can Load Smaller Packages—But Can it Fly?

USAF, or The United States Air Force, has a “baby” C-17, otherwise known as the miniature version of the popular military cargo plane that is used to bring supplies and soldiers to various parts of the world. The small cargo aircraft has captured the hearts and awe of the internet, particularly because of its reimagination as a small aircraft. 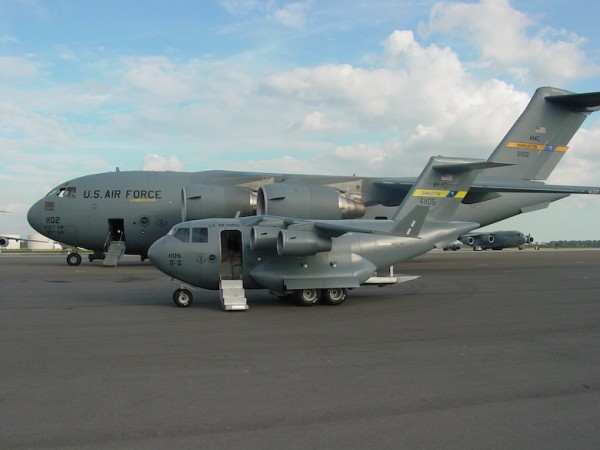 When people say or mention the C-17 or the latest issued C-17 Globemaster III, it is thought of to be among the largest of aircraft in the world, especially as it is intended for cargo and massive loads. Boeing’s C-17 is a popular aircraft amongst the ranks of the US military, as it is known to transport the various needs of the country to foreign destinations.

The US Air Force has been known to look into different pieces of technology for the advancement of its equipment and needs that it uses for its day-to-day basis. This includes the single-passenger 18-rotor flying car which would soon be a standard issue, along with the soon debuting B-21 stealth bomber for its military needs.

USAF’s ‘Baby’ C-17, a Mini Version That Took Over the Internet

However, as much as the Air Force looks into new technology and massive equipment on its lineup, it also has created a cute and adorable little version of the popular C-17 Globemaster III from Boeing. According to the 315th Airlift Wing, a Mini C-17 or the Baby C-17 was created to commemorate the massive aircraft from the military.

Volunteers from the 315th Airlift and 437 Airlift Wings have fabricated this from several materials, including that of a retired John Deere Gator Utility Task Vehicle (UTV), used by the US military. The baby C-17 now resides at Charleston Air Force Base and is intended to join military parades and other showcases to bring forth that of the C-17.

The original Boeing C-17 is massive enough to be parading on streets, so this baby C-17 will be the perfect cargo plane to roll out on the streets and bring a scaled-down version of the aircraft to the public. What is more iconic is its rear loading ramp that has the capabilities to open and close, much like the original version.

The Baby C-17 was four years in the making, and as much as it is a treat to see, it is not functional and cannot fly, particularly because it lacks the power and propulsion to do so. Since it is only coming from a utility and off-road vehicle, its engine cannot sustain the need for a lift off the ground, much so the added weight it has with the castings.

What the Baby C-17 can do is to serve as the mascot or replica of the Boeing C-17, and can run around the air and military base for soldiers to see and marvel upon. Most of the C-17’s features can be seen in its mini version, including the flight panel and cockpit, the door-stairs on the side, its wings, and many more.

Related Article: US Air Force Has Successfully Created a Mysterious Fighter Jet in Just a Year–and They’ve Done it in Secret