Trial of ex-minister of industry and trade, accomplices reopens – VNExplorer 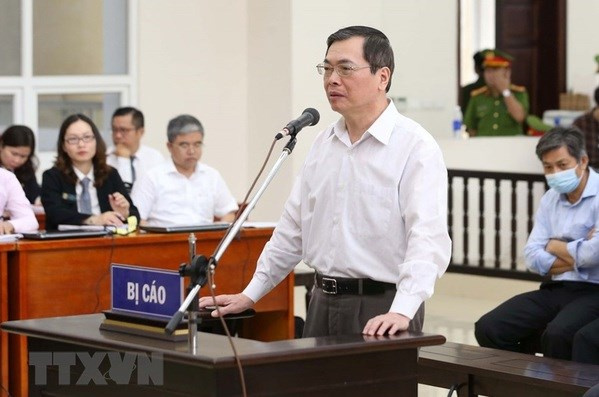 Hanoi (VNA) – The People’s Court of Hanoi on April 22 resumed a trial for ex-minister of industry and trade Vu Huy Hoang who involves in the cases of “violating regulations on the management and use of State assets, causing losses and wastefulness,” and “violating regulations on land management” that occurred in the Ministry of Industry and Trade (MoIT) and Ho Chi Minh City.

Hoang, born in 1953, and Phan Chi Dung, born in 1957, were charged of “violating regulations on the management and use of State assets, causing losses and wastefulness” under Clause 3, Article 219 of the 2015 Penal Code.

The eight other defendants were accused of “violating regulations on land management” under Item b, Clause 3, Article 229 of the 2015 Penal Code.

Due to poor health, Hoang asked for seat and medical support throughout the court.

Under the indictment by the Supreme People’s Procuracy, the Saigon Beer – Alcohol – Beverage JSC (Sabeco), which is under the MoIT’s management, was given more than 6,000 sq.m at 2-4-6 Hai Ba Trung Street, Ben Nghe ward, District 1 of HCM City for production and business purposes.

However, Hoang and Dung directed subordinates at the ministry and Sabeco to carry out procedures for using land use rights and Sabeco’s money as capital contributions to set up Sabeco Pearl, a joint venture between the firm and a number of private enterprises, to implement a project building a hotel, a trade and convention centre, and office space for lease on the land.

After Sabeco completed legal procedures for the joint venture’s investment and proposed the HCM City People’s Committee approve the addition of officetel and housing functions to this project, the MoIT ordered the company to transfer all of Sabeco’s stake in this project to the private enterprises in the joint venture.

This was illegal and resulted in a loss of over 2.7 trillion VND (112.5 million USD) to the State, according to the indictment.

The indictment defined that the majority of the defendants holds high positions in the MoIT and HCM City People’s Committee, with high professional qualification and deep understanding of their areas. However, with different motivation, they committed serious law violations in a long period, deliberately triggering regulations on State property management as well as land management, causing great losses to the State.

The first-instance trial was first held on January 7. However, it was delayed due to the absence of three defendants and many other people whose rights and obligations are associated with the case. The trial was held again on January 18 but suspended again for the same reason.

The trial is scheduled to take place in one week./.