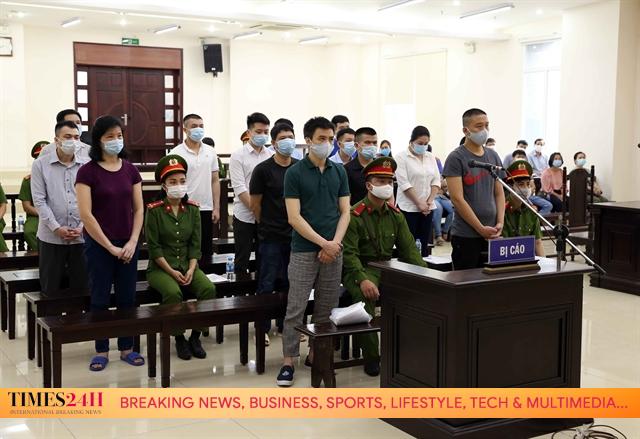 The defendants at court on Wednesday. — VNA/VNS Photo

HÀ NỘI — The People’s Court of Hà Nội on Wednesday opened the first-instance trial in a case related to smuggling and violations of accounting regulations which occurred at Nhật Cường Technic Co. Ltd.

This is one of five major cases the Central Steering Committee for Corruption Prevention and Control has required to be tried as early as possible.

At the opening session, the jury announced a decision to cancel the trial against Mai Tiến Dũng, 38, head of Nhật Cường Company’s used mobile business line, who died due to illness.

Among 14 defendants put on trial, three are women. All of the defendants are being held in custody.

The 12 other defendants, along with Ngọc, are prosecuted for smuggling.

Regarding the charge of smuggling, the indictment said from January 2014 to May 2019, Bùi Quang Huy, Nhật Cường General Director, personally directed the company’s staff to conduct 2,502 illegal transactions involving the purchase and sale of more than 255,000 mobile phones and pieces of electronic equipment worth over VNĐ2.92 trillion in total (US$126.7 million) with 16 suppliers in Hong Kong (China).

Huy then contacted and hired smuggling rings to transport the products from Hong Kong to Việt Nam and hand them over to the Nhật Cường Company for sale, with a total of 52,811 products sold for a total value of VNĐ307 billion.

As for the violations of accounting regulations that caused serious consequences, the indictment said in 2014, Huy instructed the firm’s employees to set up two different accounting systems, one for internal use and another fake one for public reporting.

The procuracy said that this is a banned act under Article 13 of the law on accounting, which caused a loss of nearly VNĐ30 billion in tax revenue for the State.

Huy and several other defendants are on the run and have been put on the wanted list by police.

The trial is expected to last a week. — VNS