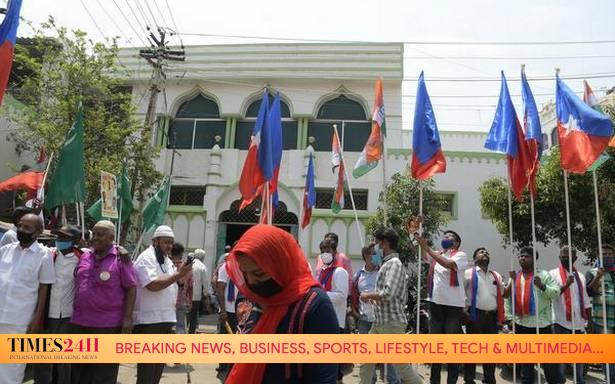 Party functionaries said that their votes are significant in deciding the winners in the election.

With nine days left for the election campaign to end, political parties in Erode are trying to get the votes of about 16,500 North Indian voters who had settled down in various parts of the city coming under the Erode (East) Assembly constituency.

During partition of India, a Hindu family from Karachi in Pakistan, came to the city and settled here. They started a textile showroom, ‘Bombay Hall’, near the Town Police Station. Till 1975, only nine families were doing business here. As the favourable business environment prevailed, more people from North India, particularly from Rajasthan and Gujarat, started arriving between 1975 and 1980 and got settled here.

While over 60% of them are involved in textile business, the rest are involved in selling wholesale fancy items, utensils, turmeric exports and lending money. They reside in four major wards in the corporation limits at Indira Nagar, Thirunagar Colony, Kottai, Valayakarar Street, K.A.S. Nagar, OMR Colony, Nehru Street and parts of Karungalpalayam.

Also, migrant workers from Uttar Pradesh, Bihar and Odisha and few other states are running tea shops and involved in small business activities in the city. Over 8,500 families of 22 castes, including Agarwal, Gupta and Jain are residing here for over 30 years now and casting their votes during the elections.

Having been long time residents of the constituency, the candidates speak in Tamil while canvassing votes and remain in a comfort zone, rather than trying to speak in Hindi. The candidates of major parties, M. Yuvaraja of Tamil Manila Congress, who is contesting in Two-leaves symbol and E. Thirumahan Everaa of Indian National Congress, are seeking their votes promising to solve their problems in business.

On Friday, All India Congress committee (AICC) secretary and party Tamil Nadu in-charge Sanjay Dutt met Mr. Thirumahan Everaa and held discussions. Later, they campaigned at a street where the North Indian settlers carryout their business and sought votes for the party.

Party functionaries said that their votes are significant in deciding the winners in the election and hence they were focusing on reaching out to all the families.