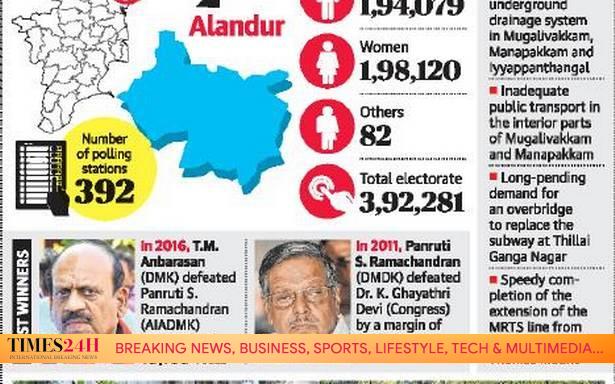 The Alandur constituency has been swaying between the AIADMK and the DMK every five years since 1991. In 2011 when Panruti S. Ramachandran won the seat on a DMDK ticket under the alliance with the AIADMK.

However, in 2014 as Mr. Ramachandran quit the DMDK and joined the AIADMK, V.N.P. Venkataraman was given the ticket and he won against DMK’s R.S. Bharathi. In this Assembly election, MLA T.M. Anbarasan of the DMK is taking on B. Valarmathi of AIADMK, who won the seat in 2001. The other two important candidates are E. Sarathbabu of the Makkal Needhi Maiam and R. Karthikeyan of the Naam Tamizhar Katchi.

Alandur has a symbiotic relationship with the AIADMK as the party founder and former Chief Minister M.G. Ramachandran started his political career by winning the Parangimalai constituency in 1967 and again in 1971. The constituency was later merged with Alandur constituency.

The constituency is spread across Nanganallur, Palavanthangal, Vanuvampet, Iyyappanthangal, Mugalivakkam, Manapakkam, St. Thomas Mount and Nandambakkam. The localities were brought under the limits of the Greater Chennai Corporation in 2014 but are yet to see the fruits of better basic amenities such as piped drinking water supply, underground drainage system, and good roads. Civic work on flood mitigation has been completed. Nanganallur and Palavanthangal have undergone a sea change as grid roads have been laid.

The thickly-populated areas of Palavanthangal, Vanuvampet, and Nanganallur had been provided piped drinking water supply and UGD even before they were brought under the Corporation limits but the people still expect more civic infrastructure.

K. Balachandar, a resident of Palavanthangal, says the area needs an 110kV substation on the lines of those in Velachery and Guindy to tackle low voltage and erratic power supply.

While a section of the residents has reaped the benefits of being included in the Corporation limits, a major section of Mugalivakkam, Manapakkam, Iyyappanthangal and Nandambakkam, are still struggling for civic infrastructure.

K. Ravindran, a resident of Mugalivakkam, says it has been more than six years and the residents have not seen any major shift in civic facilities.

Mr. Ravindran, an office-bearer of the RGL Dream Bungalows Residents Welfare Association, says the residents have been paying water and sewage taxes although the area does not have both forcing them to spend on hiring sewage lorries regularly for removing the grey water.

The residents of Manapakkam and Mugalivakkam complain about poor bus facility to reach the Mount Poonamallee Road, bad roads, particularly Mugalivakkam Bypass, and release of sewage into the storm-water drains.

The former Labour Minister and two-time MLA T.M. Anbarasan of the DMK has been nursing the constituency well by securing allocation of funds and executing several civic infrastructure work, including the macro canal to carry excess rainwater from Manapakkam and Mugalivakkam to the Adyar.

Mr. Anbarasan has been given credit for commissioning of a new sewage pumping station at Neelamangai Nagar in Adambakkam at a cost of ₹24.52 crore, construction of a bridge across the Adyar to link Gerugambakkam with Cowl Bazaar at a cost of ₹7 crore, execution of the drinking water supply scheme and UGD in Mugalivakkam, Manapakkam and Nandambakkam, at an outlay of more than ₹100 crore and renovation of the Moovarasampet pond by paving the footpath and constructing compound wall at a cost of ₹50 lakh.