In July, Bamboo Airways’ delay rate was 8.3%. Meanwhile, the delay rate at Vietnam Airlines and Vietjet Air rose to 23.7% and 19% respectively.

An airline representative recently said that one of the reasons many of its flights are frequently delayed is that the current airline infrastructure is not strong enough, the ground is tight, the flight path is not enough and the platform is lacking.

For example, at Tan Son Nhat airport, there are only 83 platforms, if there are 200 flights at the same time, many flights have to wait to land.

Likewise, the problem of airport operation, ground management, flight schedule construction and lack of human resources are also the reasons for delays in airline flights.

He said he had experienced a flight to London and had to wait 3.5 hours because the airport had only 3 immigration officers for 2,000 visitors, and confirmed that the delay was not due to the quality of the airline’s aircraft. “The airline’s planes are very modern, only 3-5 years old, old planes must be 10 to 15 years old,” he said. 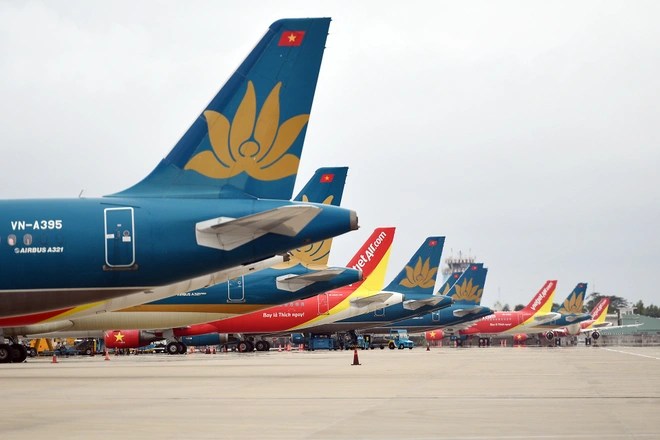 The airline believes that the main reason for the delay in recent times is poor airport infrastructure.

However, he also admitted that the airline had flaws in flight schedules and staff due to its rapid development, causing delays. He believes the company will improve in the coming time and serve customers better.

According to the latest data from the Civil Aviation Administration of Vietnam, the total number of domestic airline flights reached 33,238 flights in July, an increase of 781.2% in the same period in 2021 and 7.9% compared to June.

The industry-wide on-time take-off rate over this period reached 81.8%. In which Vietravel Airlines is the leader in the number of flights that depart on time (OTP) in July with a speed of 91.9%. Next up is Bamboo Airways with 91.7% of flights departing on time.

For example, the delay rate at Vietnam Airlines and Vietjet Air is 23.7% and 19% respectively.

According to the airline industry regulator, the main reason for airline delays during this period is the late arrival of the aircraft.

In addition, some of the causes that lead to air freight delays are equipment and services in the port; flight management and operation; weather; airlines; late return flight and other reasons…