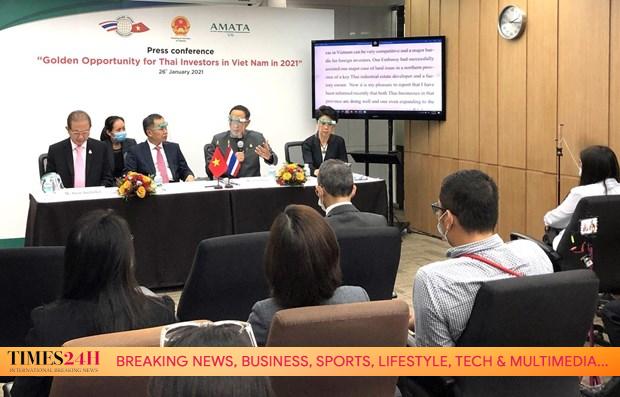 BANGKOK — Việt Nam remains an attractive destination for foreign investment, including from Thailand, because it is a large and growing market, Tanee Sangrat, Director General of the Department of Information and Spokesman of the Foreign Ministry of Thailand, has said.

Addressing a press conference themed “Golden opportunity for Thai investors in Vietnam” jointly held by the Vietnamese Embassy in Thailand, the Thailand-Vietnam Business Council (TVBC) and Amata Vietnam Public Company Limited on Tuesday, Tannee Sangrat, who is also former Thai Ambassador to Việt Nam, affirmed that Việt Nam has been one of Thailand’s most important foreign investment markets since its first investment in Viet Nam after the country’s policy of đổi mới (renewal).

Thai businesses entering the country are growing stronger and their investment is expanding and gaining success, he said.

He highly valued Việt Nam’s efforts to improve competitiveness, investment and the business environment to attract FDI, saying that the success of Thai investors in Việt Nam in the next few years will largely depend on the continuation of the current investment policy and the support of the Vietnamese Government, and the country’s economic growth.

Thai businesses need to take advantage of these to set up manufacturing factories in Việt Nam for export, he added.

He spoke highly of the success of Thai business operating in Việt Nam, describing it as a vivid manifestation of long-term cooperation between the two countries.

According to Thanh, Thailand currently ranks the 9th biggest investment partner of Việt Nam with 603 FDI projects worth $13 billion, and investment flows from Thailand to Việt Nam are expected to increase in the future.

He said that the country is a successful and safe destination for foreign investors, especially in the context of supply chain disruptions due to trade tensions and the COVID-19 pandemic.

Somhatai Panichewa, General Director and Chief Executive Officer of Amata Vietnam Plc (AMATAV), said from the perspective of an industrial estate developer in Viet Nam, the company believes in the growth of Việt Nam.

The Thai firm has so far operated six projects with a total investment of about $840 million in Việt Nam. — VNA/VNS