Tesla came up with its plans of installing Megacharger for the upcoming Tesla Semi electric truck. The deployment of the more powerful Superchargers was seen at the Gigafactory Nevada earlier this week. 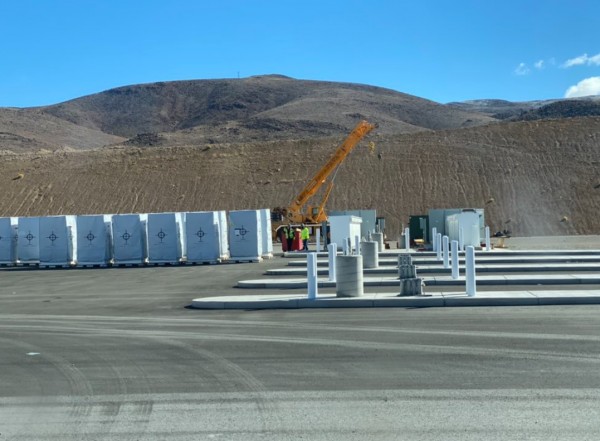 (Photo : Sawyer Merritt from Twitter )
Tesla was spotted to be deploying the mega chargers on the Semi electric truck at its factory in Nevada. How Tesla arrived at this plan?

According to the latest report by Electrek, Tesla wants to explore prolonging the range of the vehicle to only 30 minutes. The company aims to pile up an extra 400 miles for the EV while preserving low electricity rates.

The source wrote that Tesla specifically eyes a charging station that would exceed 1 megawatt. This refers to the more dominant Superchargers network: the Megacharger.

Over the past two years, Tesla has submitted the designs of the charging stations to CharIn, an organization focused on e-mobility. At that time, the global association was developing a standard for the electric truck’s charging stations.

Besides, four other companies have finished submitting their designs for high-power charging. These are Staubli. ABB, Electrify, and paXos.

In 2020, the current Tesla head of Heavy Trucking Jerome Guillen at that period stated that the company was discussing matters about the Megacharger with the other firms.

Guillen left the company in June 2021 after serving Tesla for ten years.

Tesla Roadster is Set to Arrive in 2023

Initially, Tesla first teased the Roadster model back in 2017. The electric car faced many delays in the past because of the problems with batteries and motor powertrain. This time, the company confirmed its official launch in 2023.

According to the CEO, Elon Musk, we could anticipate that the production of the vehicle would push through next year so they could hit the target release date.

For the price of this Cybertruck, the assumed price range could start from $250,000 for the first 1000 units: the Founders Editions. On the other hand, the remaining models will be much cheaper at a beginning price of $200,000, Autocar reported.

The stellar speed of the Roadster as claimed by Tesla could reach 60mph at 1.9 seconds. It could reportedly reach speeds of 100mph in just 4.2 seconds.

Back in March, a Twitter user said that he spotted the prototype of Tesla’s electric truck rushing on the highway. The short clip shows that the Semi Truck was quietly pulling the trailer next to them. He later confirmed that it was really from Tesla when he saw the official logo.

This EV model features Model 3 electric motors which give it a “silent” treatment when driving on the road. This component is responsible for suppressing the loud sound of the truck when moving. Musk said that it uses a 4860 battery, which is six times more powerful than the standard battery.