A South Korean designer has a weird solution for the safety of smartphone addicts. It is a “third eye” that would alert users if an obstacle is coming their way while walking — and at the same time — looking on their phones. 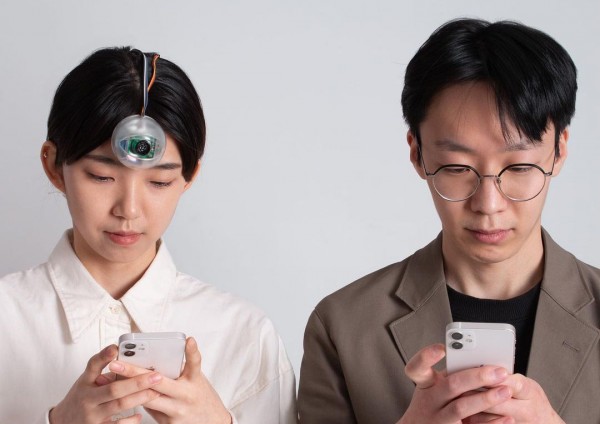 (Photo : Screenshot from @minwookpaeng)
Smartphones addicts need this for their safety! A South Korean designer created a “Third Eye” device to alert users of oncoming obstacles as they walk along busy streets.

Smartphones have emerged from being a luxury to a necessity in our modern lives. Most of the things that used to be done offline are now in the palm of our hands — from banking to even searching for a lover.

With endless things to do on smartphones, most of us walk even with our eyes looking down on our phones. The lack of vision of what comes along the way increases the risk of bumping into obstacles that lie ahead.

Most people even go to the extent of using phones as they’re behind the wheel, which often lead to fatal accidents. However, the “third eye” is unfortunately only for people who are walking. So, drivers are still encouraged to keep their eyes on the road when driving and avoid using their devices when they’re behind the wheels.

According to Reuters, smartphone users could then place the device on their foreheads, and it will detect if there are obstructions ahead. The device will start working when the user’s head starts lowering at a certain angle.

For the Third Eye, it would mean that the person is already drawn to a smartphone.

As such, the gadget will start beeping when its sensors detect an obstacle from one to two meters ahead. The beeps get annoyingly louder as the user gets closer to it, just in case the first few alerts were not enough.

It would make sure that smartphone users could go on tapping and scrolling without accidentally getting an injury.

The gyro sensor of The Third Eye looks like a robotic eyeball. According to Yahoo News, the extra “eye” includes a speaker, a gyroscope, and an ultrasonic sonar sensor inside it. It may have been why it’s a little too bulky.

In turn, the users will look like an alien when the device is strapped to their heads. To Min-wook, it is how people in the future will look.

“As we cannot take our eyes off from smartphones, the extra eye will be needed in future,” Min-wook told Reuters.

The concept may be laughed at by most, but the underlying issue is serious. Some would be too distracted to realize the wrath of smartphone addiction.

It has become so prevalent that even Apple produced a feature for iPhone called Screen Time to combat it. An MRI scan even revealed that addicts could experience stress, depressing mood, and even sleep deprivation when the phone is unavailable.

Related Article: Apple’s Night Shift is Not the Answer to a Better Night’s Sleep, Study Suggests