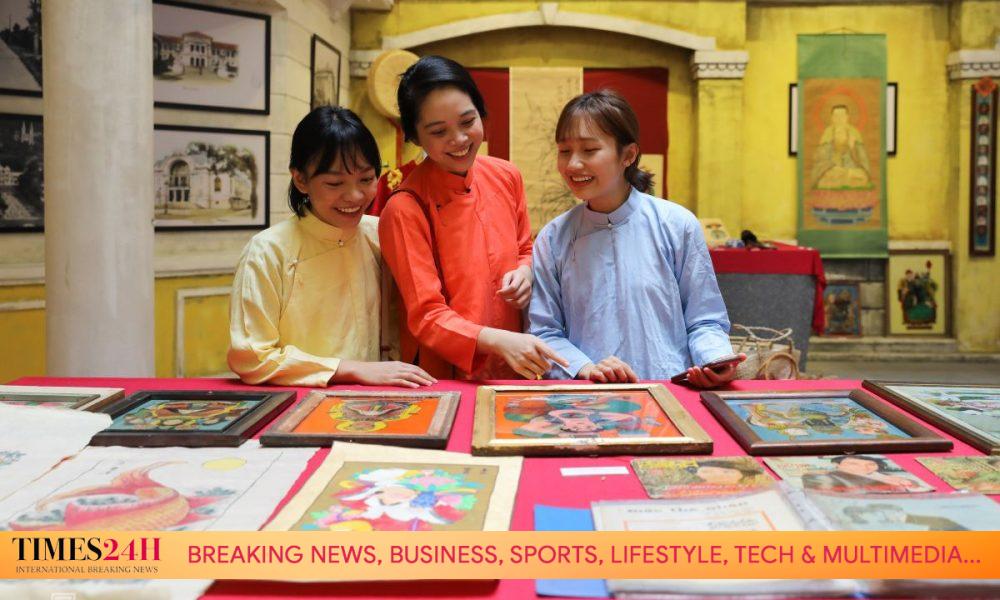 December is great time to trek the mountains of northwestern Vietnam as maple forests change colour from green to yellowish-red. 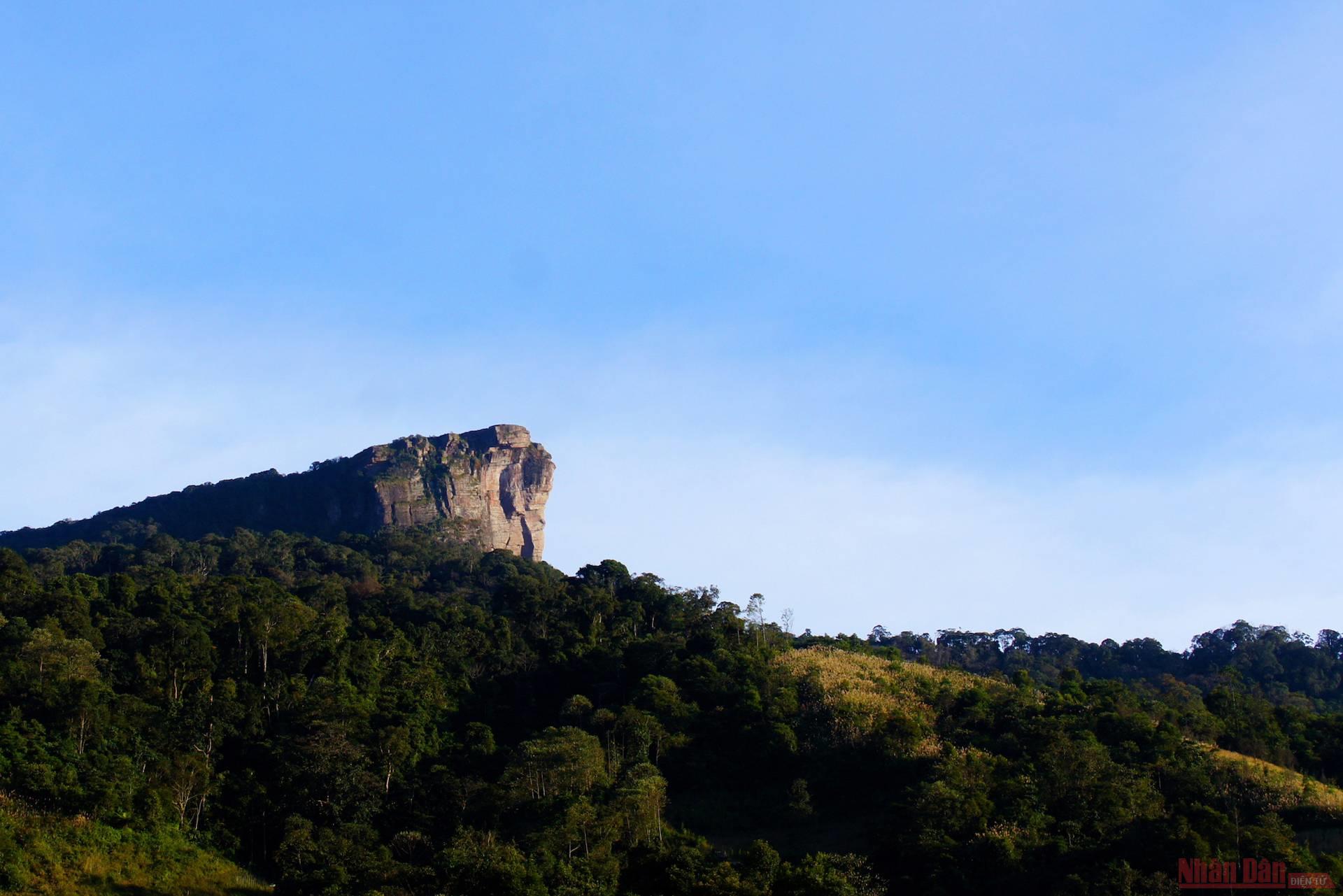 Dubbed the roof of Moc Chau, Pha Luong Mountain’s peak floats on top of the mountain and is almost separated from the jungle mountains. Pha Luong peak is located between the Vietnam-Laos border. At an altitude of nearly 2,000 metres, the cliffs rise up with many tectonic crevices that create a majestic and fascinating scene. This place is also famous for its particularly complicated security situation, which is a key point for drug smuggling and transportation, so you can only climb to the top if you have been approved by the Pha Luong Border Station at the foot of the mountain. Although there are still many difficulties, this has become a very attractive trekking spot when traveling to Moc Chau. 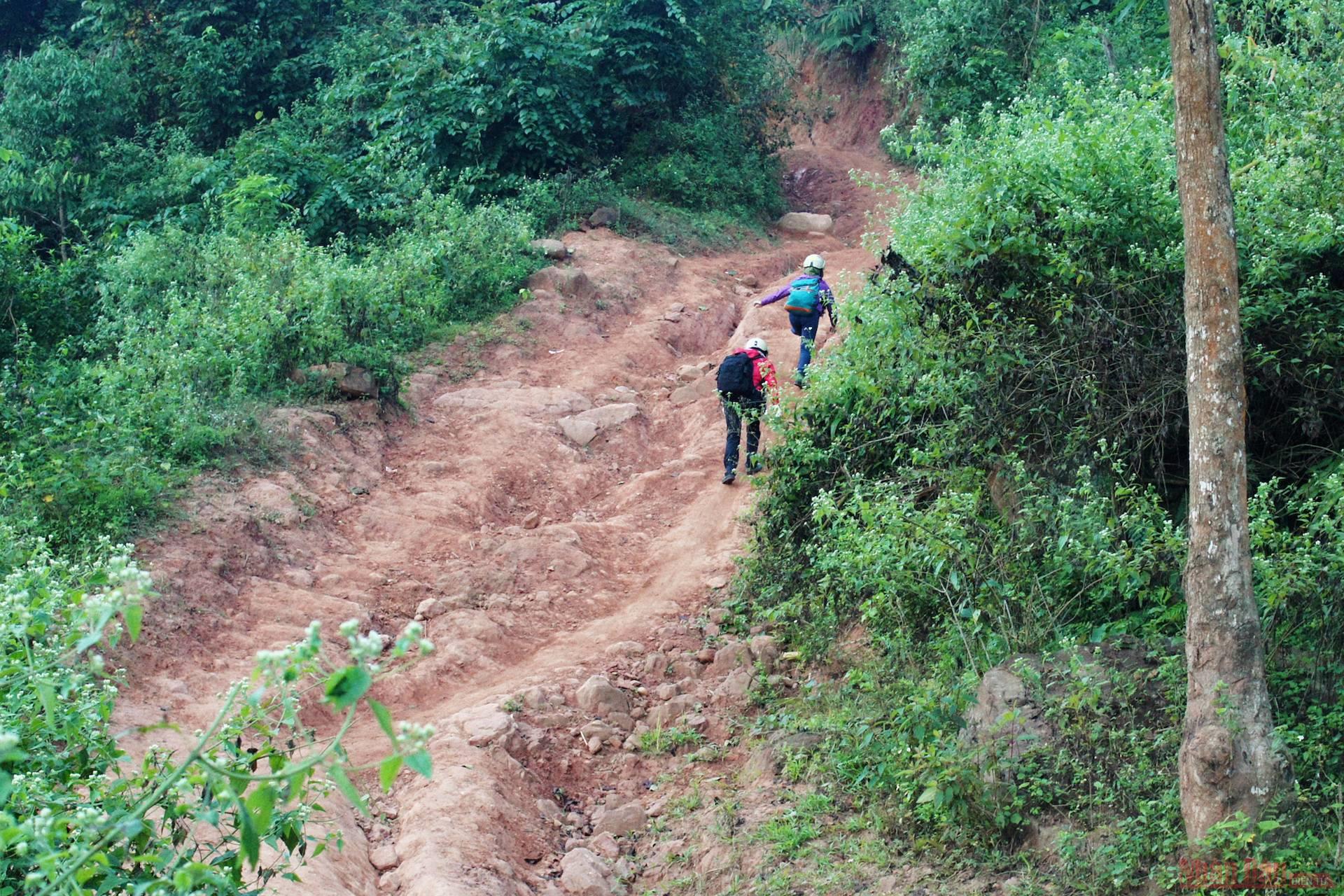 From 4 am, we had to wake up to begin the difficult journey ahead. The distance from the centre of Moc Chau to Pha Luong Border Station – located in Chieng Son Commune – is about 30km. 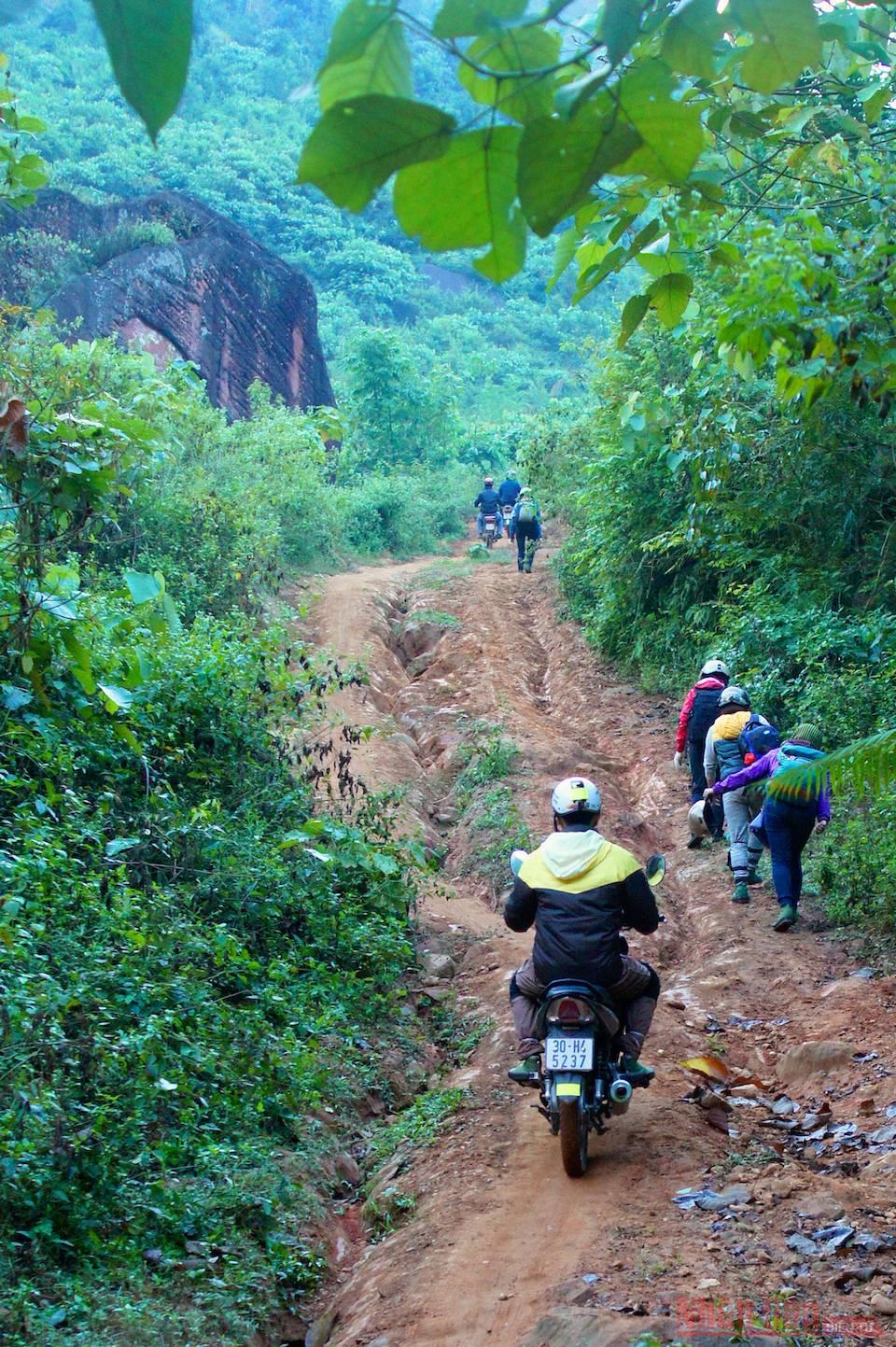 Following National Highway 43 in the direction of Loong Sap Border Gate, we turned left to Chieng Ve about 20km from the town. On the last 3km of asphalt, we approached the unique dirt road leading up to the border station. It’s only about 7km long, but it’s really difficult with steep and bumpy ups and downs, with the abyss right next to the wheel. Along the way, you will admire countless giant rocks along the path, which are also a very impressive photo spots. 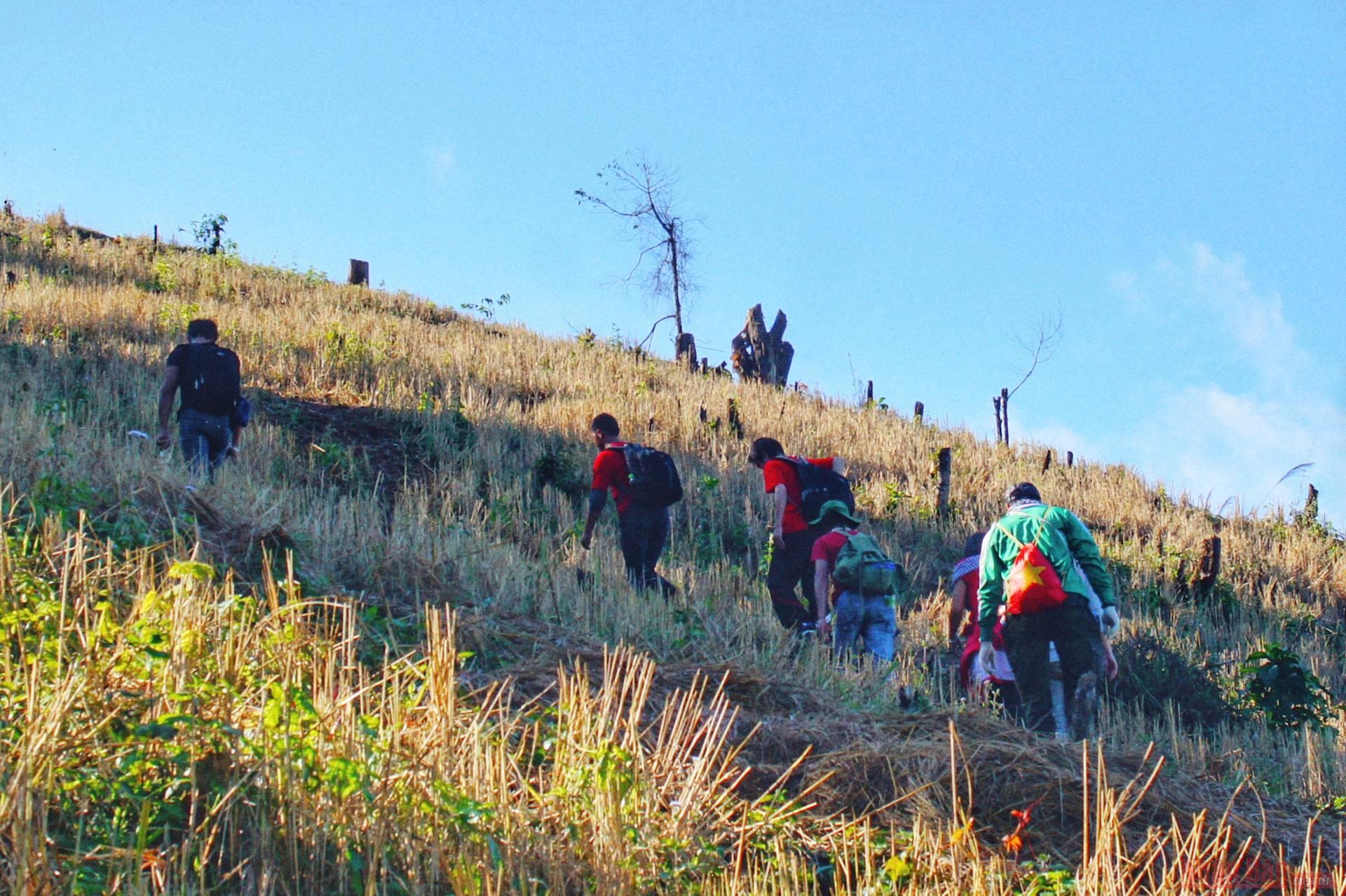 After parking and checking in with Pha Luong Station, we officially started a trekking journey under the guidance of a native man. The first way to pass is about 2km long, go up to the grassy hills and the H’mong terraced fields to reach the old forest surrounding the foot of the mountain. 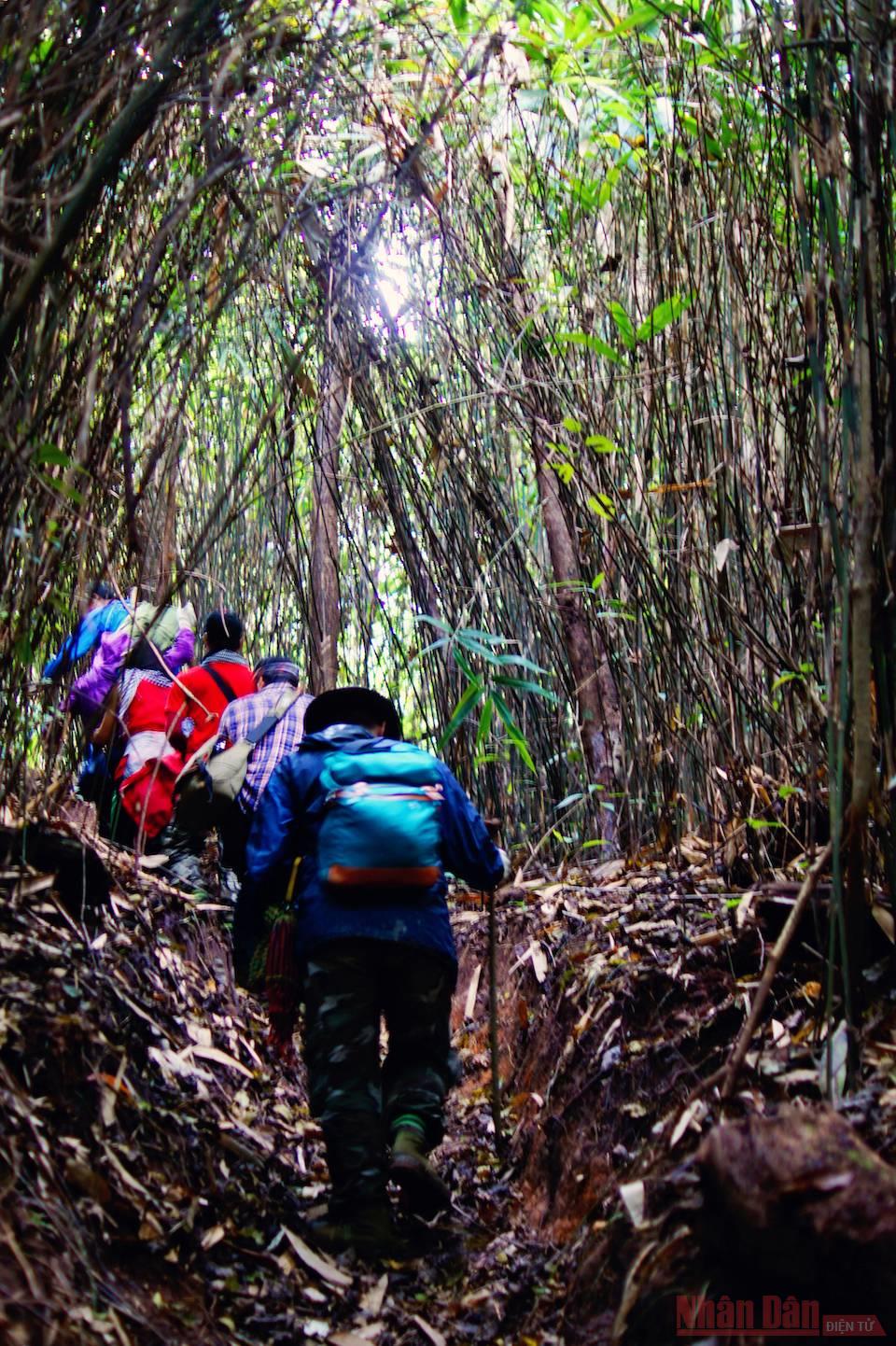 The early sunlight and it took a lot of effort for the difficult road to get to the station, so passing the thatched grass hill was also when we were tired. Fortunately, after that, the journey only went through the forest, so even though the climb was only up the slope but not down, the sun did not affect the footsteps of the group much. We were excited to see a forest of maple leaves – a variety of tree that seems only to be found in temperate countries – which is also strewn in some other north-western highlands areas such as Tam Dao, Che Tao, Sapa. It is also a sign of nearing the top of Pha Luong, as this plant usually grows in cold air. 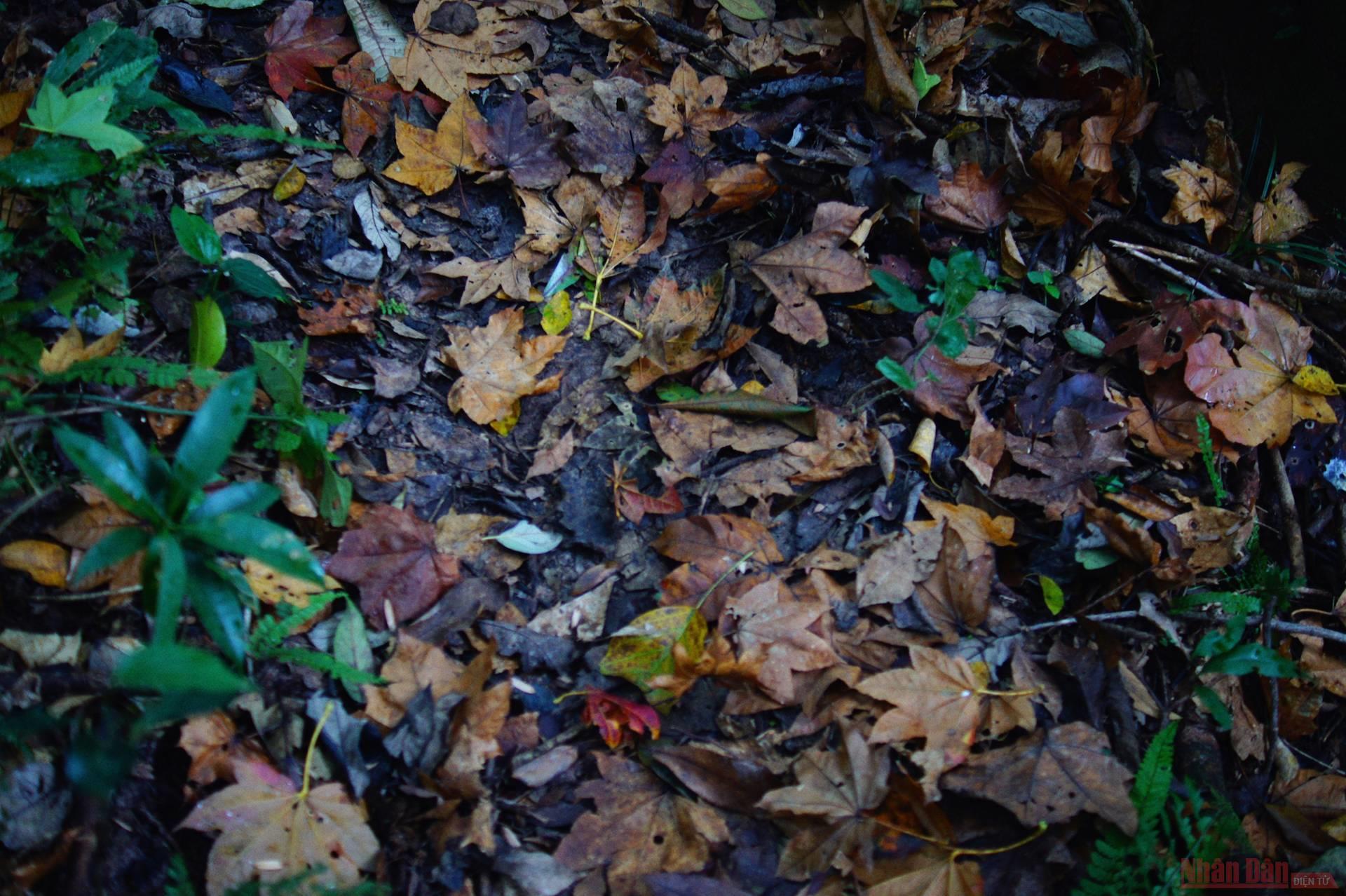 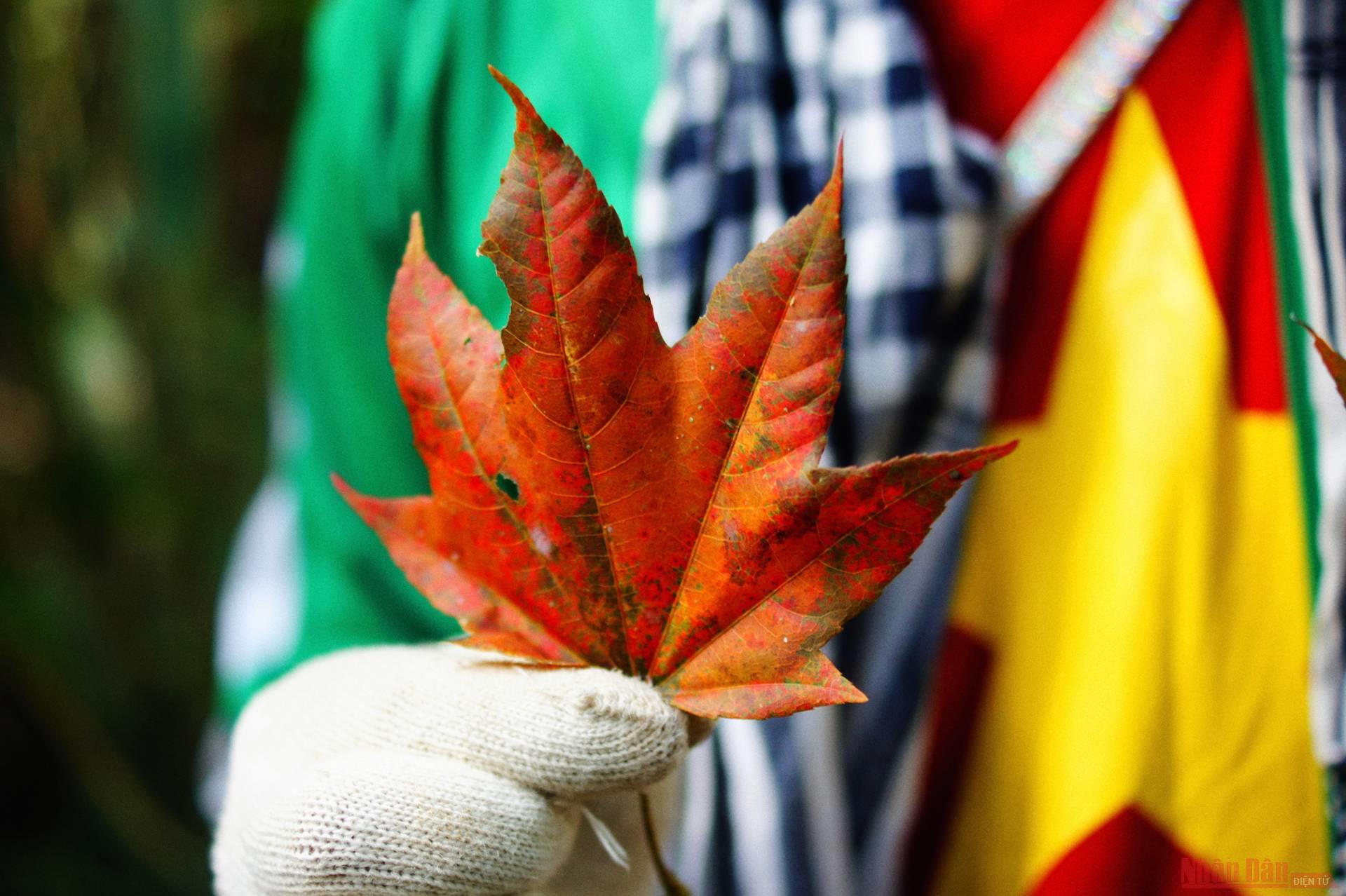 The carpet of falling maple leaves covered the path through the forest. After four hours trekking across many different types of terrain, we finally reached the top of Pha Luong. And the reward for all that fatigue is that the natural scenery is so majestic on the top of this natural border mountain. 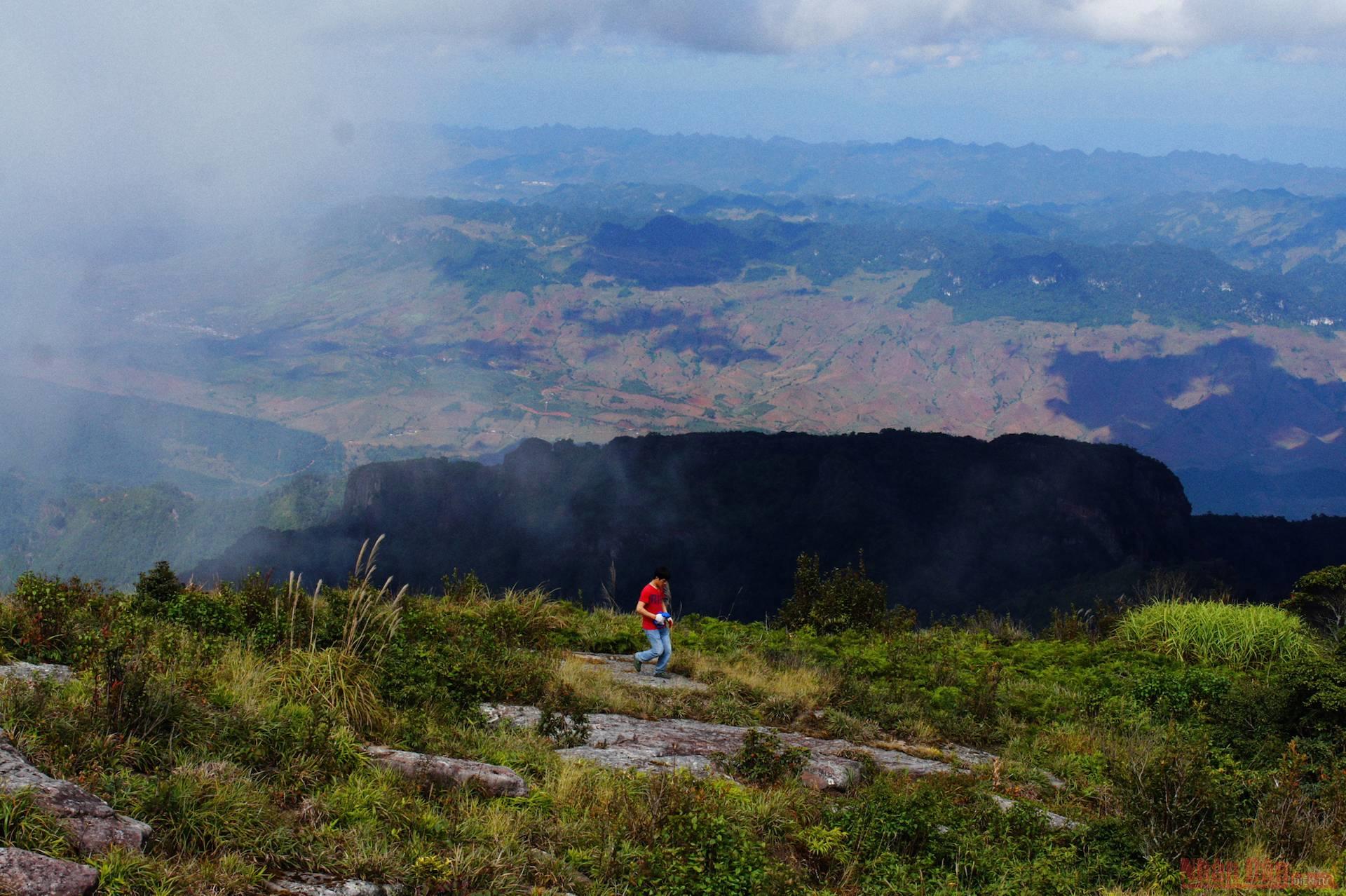 A special thing about Pha Luong, unlike many other mountains, is that the top of the mountain has a very wide, flat surface stretching like a stadium covered with trees. It would be great to camp here on the flat rocks to watch the sunset and dawn, but due to the security of the border area, it seems impossible at present. 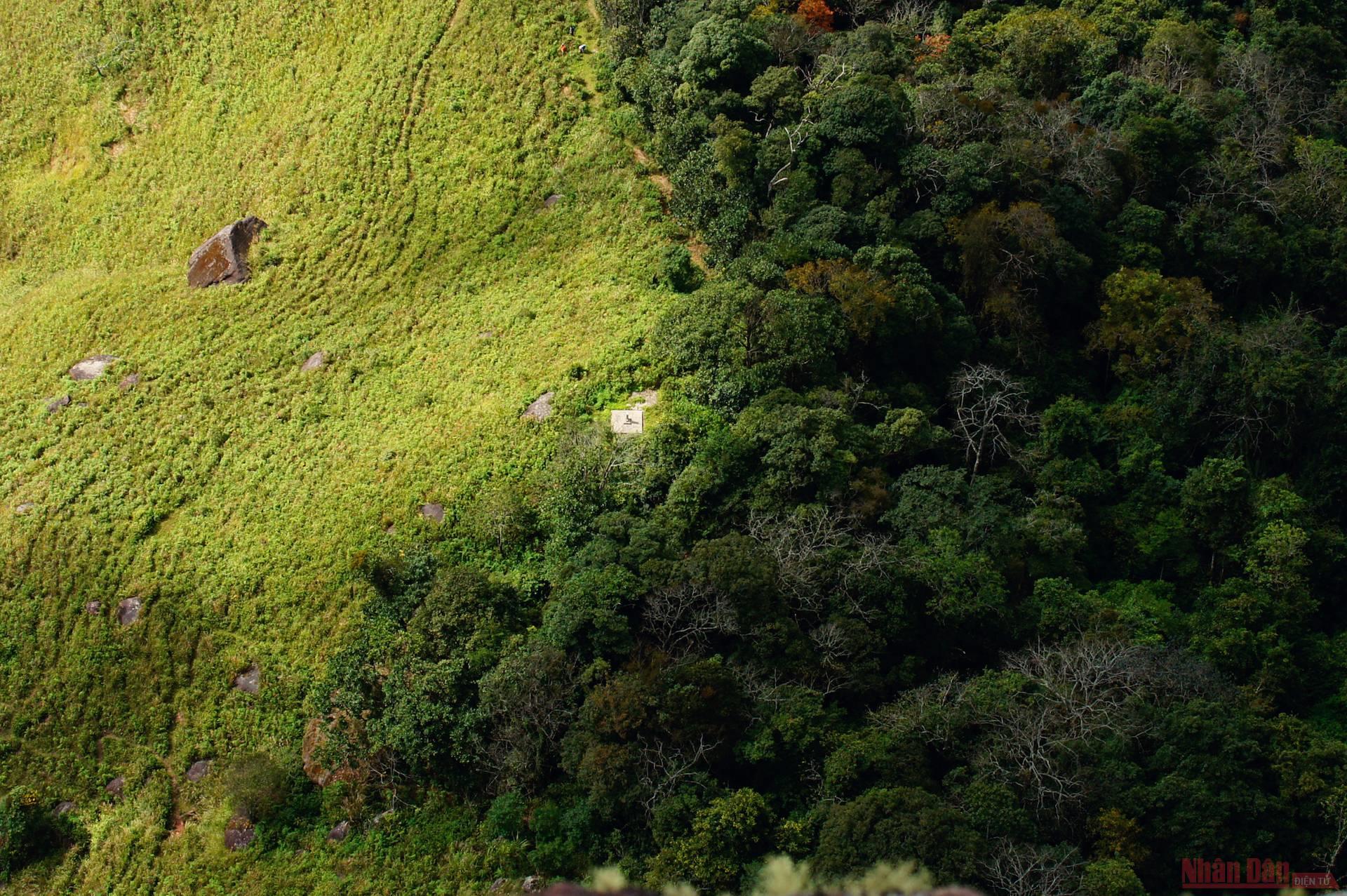 Sacred landmark 264 and the natural border of Vietnam – Laos with two different examples of vegetation on the mountain. 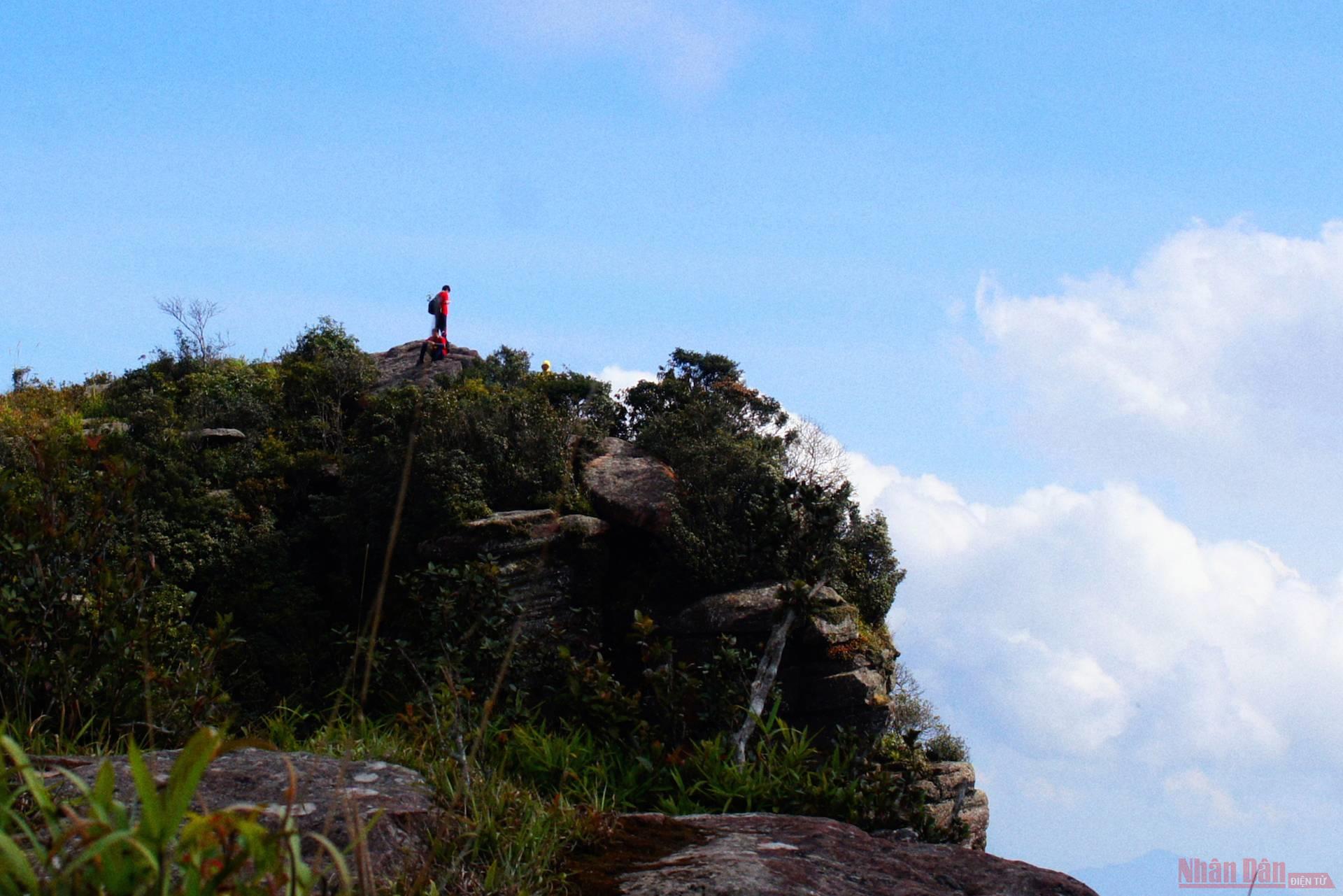 Due to the topographical structure and natural faults in the formation of rocky mountains from thousands of years ago, Pha Luong Peak has many special ravines and indenting cliffs with diverse shapes. 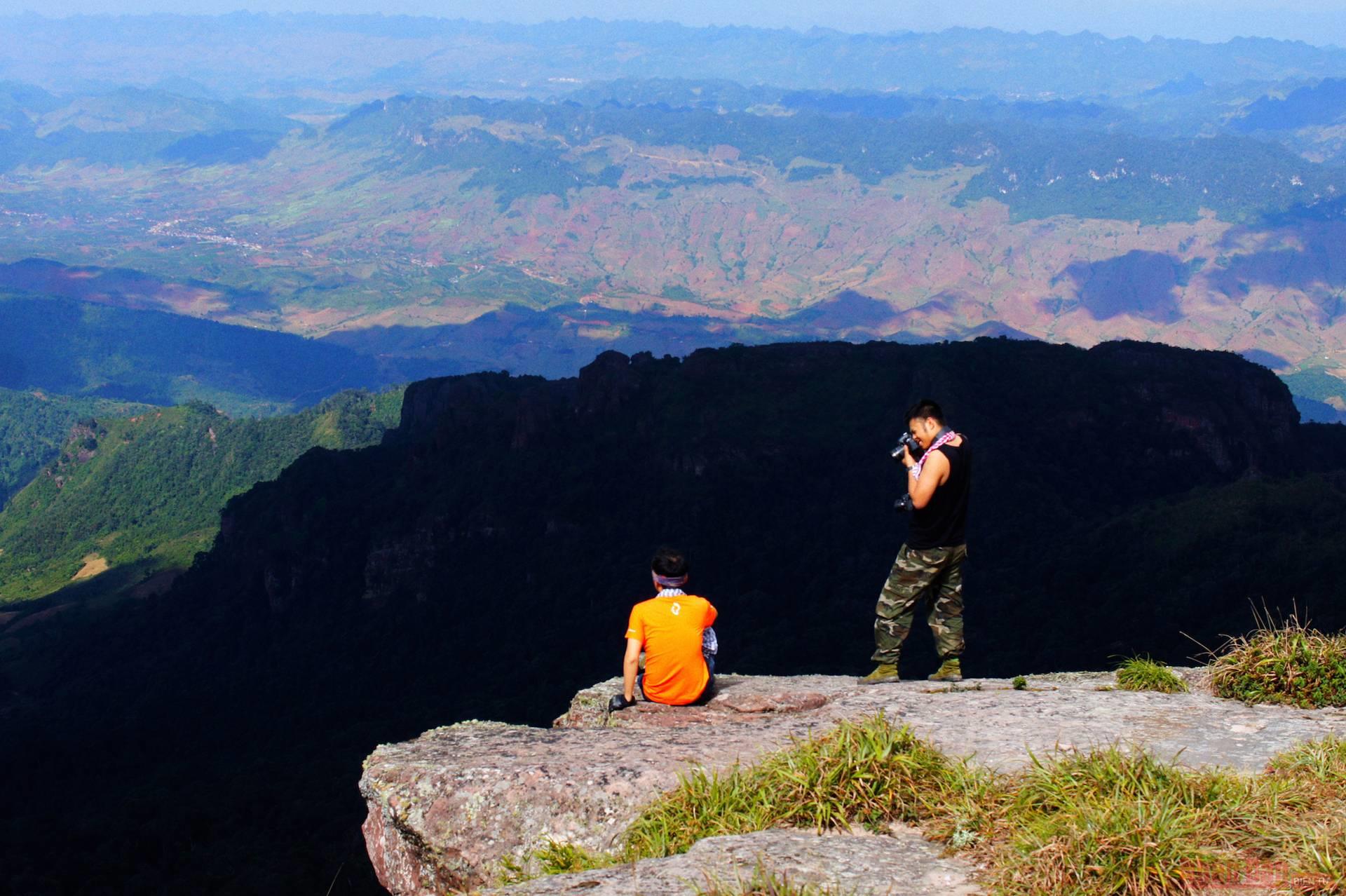 Each corner of the mountain is stacked rocks, so these are also very beautiful photo angles for those who love adventure with the feeling of difference between heaven and earth. 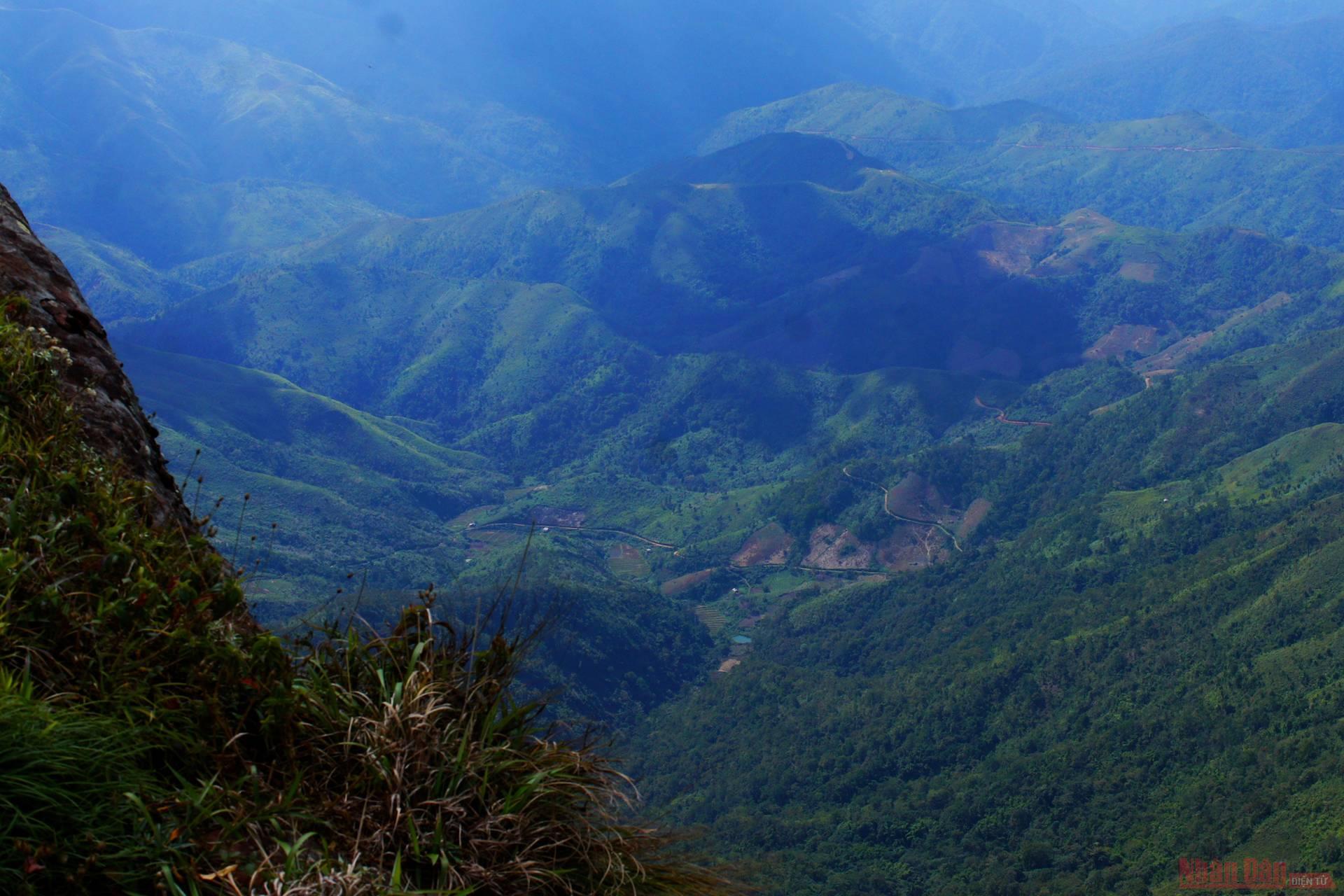 Finally, our journey ended safely after a total of four hikes, an hour-long lunch break at the top and about two and a half hours for the return treck. It is not too difficult to reach the top of Pha Luong, but it is not easy without determination. And the reward is definitely much more than what we have perspired, with a once in a lifetime experience of the great Pha Luong of old Tay Tien, in our very own way.