With a total area of ​​about 200,000ha, cinnamon cultivation currently provides a livelihood for hundreds of thousands of ethnic minority households in remote areas. — VNA/VNS Photo

HÀ NỘI — Việt Nam is the third-largest cinnamon producer and exporter in the world after Indonesia and China, and the future is full of potential. However, challenges need to be carefully navigated to ensure sustainable development.

Vietnamese star anise and cinnamon are consumed by markets in India, the Middle East, Japan, South Korea, the US, and Europe with annual export revenue reaching about US$400 million.

A report from Việt Nam Timber and Forest Products Association revealed a partner from the UK is looking for a reputable cinnamon supplier to import 50 containers of Vietnamese cinnamon to Kenya including rolled, chopped, and crushed products.

Last November, customers from Saudi Arabia imported powdered and split cinnamons from Việt Nam with a volume of about 5-10 tonnes over two or three months by transportation to Jeddah Port of Saudi Arabia.

With a total area of ​​about 200,000ha, cinnamon cultivation employs hundreds of thousands of ethnic minority households in remote areas and contributes to the socio-economic development of many municipalities.

Despite these advantages, the Vietnamese cinnamon industry is still facing difficulties and challenges.

A workshop titled “Sustainable Development of Việt Nam’s Cinnamon” was co-organised recently in Hà Nội by the Việt Nam Administration of Forestry (VNForest), the Ministry of Agriculture and Rural Development and the Stitchting Sustainable Trade Initiatives (IDH).

Speaking at the event, Nguyễn Quế Anh, Chairman of the Board of Directors of Vietnam Staraniseed Cassia Manufacturing and Exporting Joint Stock Company (VINASAMEX ), said that cinnamon growers still employ old practices and do not pay much attention to the application of advanced science and technology in cultivation and production.

This leads to their products’ quality not being high enough to meet standards for international export, according to Anh.

Anh also said about 70 per cent of cinnamon and anise varieties are produced by farmers based on their own experience, so their quality is not guaranteed. The remaining 30 per cent are supplied by agricultural companies or new planting projects of the local authorities.

Currently, the country has more than 600 companies operating in the field of spices. However, most of them are trading and only interested in buying and selling, but not in building a connection with farmers. Only a few are cooperating with farmers in the value chain. Because of this, farmers often face price issues similar to other agricultural products. 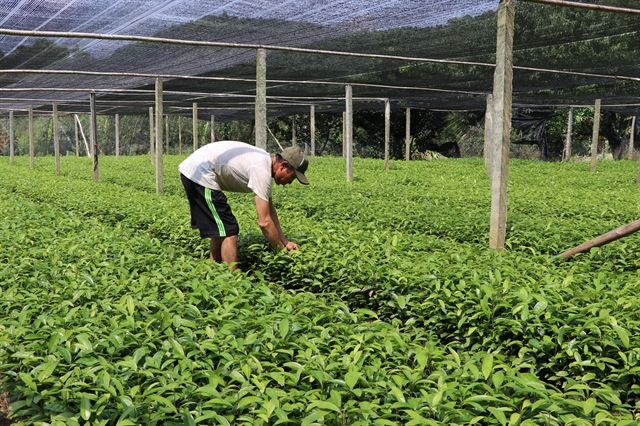 In addition, with its own peculiarity of operation, most of the cinnamon enterprises are working under a family model with small production scales, without cohesion and information sharing. In many cases, there still appeared unfair competition that weakens the competitiveness of Việt Nam’s anise and cinnamon industry.

Most of the businesses in the industry are also small and medium-sized with limited financial and technical resources. There are no specific mechanisms and policies to promote the application of science and technology in production to improve products’ quality and value for exports.

At the workshop, FAO reported Việt Nam’s total cinnamon production in 2019 reached 41,408 tonnes, accounting for 17 per cent of global production.

It was also heard that global demand for cinnamon is currently estimated at between 8-12 per cent higher than supply.

Such imbalance between supply and demand has made the price of cinnamon increase, especially from 2016 until now.

The workshop predicted this situation may lead to the massive transformation of cinnamon development in Viêt Nam.

Besides production activities, the sourcing, processing, and exporting operations are also increasing. Without strategic, timely, and sustainable management, local authorities will find it difficult to harness the industry in terms of addressing quality barriers and coping with price risks.

These issues may have a negative impact on cinnamon growers and businesses related to cinnamon processing and exporting in the country, experts said.

According to Bùi Chính Nghĩa, Deputy Director of the General Department of Forestry, cinnamon is a non-timber forest product and cinnamon production in Việt Nam is developing rapidly to meet the international market’s continuous increase in demand.

Nghĩa said the industry is at risk of unsustainable development.

Many participants at the workshop suggested establishing the Việt Nam Cinnamon Anise Association, saying it is needed to ensure benefits, as well as share market information and development orientation among the members.

“In countries around the world, spice associations in Europe, the US, and India have been effectively operating to help the spice industry of these countries develop strongly and sustainably,” said Anh.

Huỳnh Tiến Dũng, Director of IDH Việt Nam, said that a number of associations, domestic and international businesses recently have proposed IDH to open a programme to support cinnamon products.

After carefully assessing the world market demand, potentials, and challenges of the industry in Việt Nam, the IDH director said the IDH had officially included cinnamon in its new support programme in the country for the 2021-2030 period.

“This workshop has helped IDH identify priority issues that need support, contributing to the sustainable development of Việt Nam’s cinnamon industry in the future,” Dũng said.

Cinnamon is a very popular spice product not only in Việt Nam but also around the world.

In countries with a developed processing industry, cinnamon and anise are the main ingredients for producing cosmetics and pharmaceutical products.

It is mainly extracted from the bark of the stem and bank. Essential oil is extracted by steam distillation. Cinnamon is used in treating cardiovascular, respiratory, and digestive symptoms. In the cosmetic industry, cinnamon can be used to make perfumes and lotions. It is also used as a spice in food processing as it can help stimulate digestion and as a flavour in many other fields of production.

With its characteristic aroma and beautiful colour, cinnamon is used in interior decoration, furniture making, and household appliances. It is favoured by many people. With the largest area and output in the country, up to 16,000ha, Văn Yên District in Yên Bái Province is known as the cinnamon capital of Việt Nam. As one of the “four treasures of oriental medicine” and an indispensable cosmetic and spice ingredient in many dishes, Văn Yên cinnamon is considered the best variety in the country. VNS A farmer peels the bark of cinnamon. VNA/VNS Photo