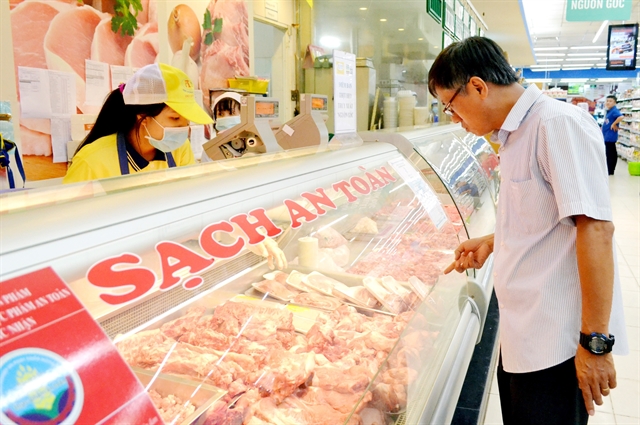 
HÀ NỘI —Demand for pork rises in the run up to Lunar New Year (Tết), prices are expected to increase, but not rise to the levels seen last year.


The Ministry of Agriculture and Rural Development said out of 5.37 million tonnes of meat consumed during this period last year, 3.8 million tonnes were pork.


Pig production remains healthy, and across 16 provinces the reproduction rate has topped 100 per cent, with more than 27 million animals available.


However, Nguyễn Văn Trọng, deputy director of the Livestock Breeding General Department under the Ministry of Agriculture and Rural Development, said prices would rise as demand grows.


Currently, live pigs are priced at VNĐ83,000-85,000 (US$3.5) per kilo but Trọng said although prices would rise, they would not reach levels seen last year.


He also said there would not be any expected shortages of the meat, but they were stepping up measures to preventing illegal exports to China.


According to the Department of Animal Health, Ministry of Agriculture and Rural Development, the country imported nearly 226,000 tonnes of pork last year, a year-on-year increase of 260 per cent.


The main import markets are from Russia, Poland, Brazil, Canada, the US, Germany and Spain.


This year, 600 tonnes of pork have been imported to supplement supplies for the Tết market.


More than half a million pigs were imported from Thailand for slaughter from mid-June last year to January 13 this year. — VNS