Newsweek published the latest in a series of hit pieces on Olivet University on Wednesday as part of its ongoing campaign to unethically segregate accreditors from the Christian university by highlighting a likely flawed NAE decision to suspend Olivet’s status — while the university’s accreditors are pressured to do so. same.

The hit pieces stem from Newsweek CEO Dev Pragad’s threats to launch a “nuclear bomb” against his declared enemies at Olivet University, where he was formerly dean of information technology, but later disavowed all ties to gain leverage. for private checking from the company Newsweek.

Newsweek, in its latest hit piece, neglects to mention the CEO’s threats, which have been extensively reported by HNGN, as well as an ongoing lawsuit by Newsweek against Olivet University, the subject of the headline. These extreme ethical and journalistic violations add to the burgeoning list of violations the liberal media is willing to commit in the full court press against the goals of its Christian University CEO Pragad.

NAE suspension based on flawed decision

Newsweek reports that Olivet’s membership has been suspended by the National Association of Evangelicals (NAE) as a result of the decision by the New York State Education Department (NYSED) to expire Olivet’s temporary permission to operate in New York. The New York campus was a satellite of the university, and Olivet’s California headquarters is still fully operational.

HNGN learned from first-hand reports that, just before the suspension, the NAE proudly announced that it would include Olivet in its May 2022 Connections newsletter.

Yet the NAE suddenly suspended Olivet’s membership in July 2022. As Olivet told Newsweek, this action was taken without due process and without any communication before or after the decision, highlighting the likelihood of yet another decision influenced by speculation and press in the media rather than facts.

The NYSED decision that Newsweek said affected NAE, meanwhile, was already covered in an HNGN article, which found that NYSED’s decision was likely a bureaucratic abuse of power and was heavily influenced by Newsweek’s repeated harassment of one or more NYSED officials.

The NYSED’s decision apparently contradicted the underlying facts, as Olivet appeared to demonstrate compliance with the standards, and the decision appears to have been based on media pressure rather than compliance. Therefore, any subsequent actions based on NYSED’s decision are also likely to be flawed, including NAE’s recent decision to suspend Olivet’s membership.

Newsweek’s presentation of this flawed story as the head of the world points to the CEO’s true intention – to use whatever means necessary to attack Olivet as leverage to take over Newsweek completely.

The latest Newsweek article uses the flawed premise that Olivet is the “center of a federal criminal investigation” and an “escalating legal dispute among Newsweek’s shareholders.” These statements are intentionally misleading and incorrect.

An article on HNGN showed that the federal investigation was based on false statements by students in an extortion network.

In addition, it was revealed that these students were approached by CEO Pragad himself – a shocking example of a CEO of a news publication who became directly involved in editing as an investigative journalist to fabricate stories for his own private business interests, without any disclosure for the sake of journalistic integrity. .

Meanwhile, at least one Newsweek editor immediately confessed his own selfish motives behind writing offensive articles against Olivet.

In a TikTok video posted on July 5, 2022, Pragad’s disciple and Newsweek editor Naveed Jamali said he feared losing his job if the facts of the lawsuit against Dev Pragad were proven true. He is also seen as mischaracterizing the recent NYSED decision as “cancelling” Olivet, and expecting other states to “follow.” He does not mention the role of Newsweek reporters in actively agitating state and accreditation agencies to take such actions, furthering Pragad’s private business interests, while at the same time acting as “journalists.” Jamali has since removed the video.

In addition, on July 11, another of Pragad’s disciples and author of the latest hit piece, assault reporter Alex Rouhandeh, was promoted. This was done after Rouhandeh repeatedly wrote negative articles about Olivet University in line with Pragad’s threats. Pragad’s newsroom granted him the new role of “congress correspondent” at Newsweek, shortly after he began his series of attacks on Pragad’s enemies.

These actions point to a clear personal motive behind the attack articles repeatedly launched by Newsweek editors and reporters on Olivet. Whether out of fear of job loss or by boosting hit pieces with promotions, Newsweek CEO Dev Pragad has created an editorial environment where the editors and reporters believe they must attack a Christian university with biased and unethical articles to protect their jobs.

In addition, Newsweek continues to defy fact-checking lawsuits, claiming that students were “captured” in college, deliberately ignoring overwhelming evidence to the contrary. Evidence that Newsweek is willfully ignoring includes HNGN’s previously confirmed photos showing the student in question at a barbecue laughing and smiling while the student was allegedly a “prisoner” at Olivet, according to Newsweek. Newsweek also ignores overwhelming evidence that when federal agents visited Olivet’s campus, they found peaceful and happy students and employees — far from being the “center of a federal criminal investigation” — and a fact that Newsweek grossly omitted.

Pragad himself, as a former dean of the school, knows that the whole gist and details of the Newsweek stories are false, yet he has encouraged the publication of such false statements for personal gain. To avoid this contradiction, the publication has conveniently claimed for months that the CEO, who works in the same office as the editors, could not be reached for comment.

According to a recent lawsuit, Pragad paid himself millions of dollars unbeknownst to the board of directors because Pragad evaded Newsweek’s approval processes.

An unnamed Newsweek spokesperson, in a blatant attempt to justify the CEO’s allegedly unauthorized transfer of millions of dollars from the company to his personal accounts, calls it “in line” with the market for a “turnaround” CEO.

However, according to the lawsuit against Pragad, the market had no determination in Pragad’s repeated raises and bonuses – as they were allegedly done entirely without any board approval, and in at least one case they were based on fabricated minutes of the Pragad’s board of directors made as he moved to clear himself for the $4,000,000 plus in raises.

Despite the sensational headlines of its series of hit pieces, Newsweek has failed to provide a shred of evidence that Olivet has any connection to a Shareholder dispute at Newsweek – other than the connections Newsweek itself has artificially forged to the alleged illegal activity.

For example, Newsweek artificially forged a bond with Olivet by suing Olivet — and then, in an unprecedented move, writing a series of articles against Olivet without revealing that the publication itself is denouncing the subject matter of its hit pieces – giving the magazine a clear vested interest in fabricating news to influence the legal proceedings it has fabricated. This was in line with Pragad’s earlier stated intention to mow down his opponents like “puppies to a machine gun,” apparently to gain leverage in his lawsuits and personal negotiations to take over the company. So far, his tactics have failed completely, as Davis has refuted Pragad’s attempts at hostile takeover.

To defend the unethical actions Newsweek’s editors have already taken that go far beyond journalistic integrity, Newsweek’s editors and reporters seek to negatively influence every organization associated with Olivet, even by resorting to unethical, illegal processes. In doing so, the Newsweek editors continue to add to the long list of ethical violations it has committed to this day — as mercenaries protecting the private business interests of Newsweek CEO Dev Pragad.

But rather than attack Olivet and try to separate it from its accreditors, Newsweek should write about its own CEO Dev Pragad’s alleged corporate crimes and unethical influence over Newsweek’s editorial staff, covered extensively in HNGN articles (In Covering Lawsuit Against Itself, Newsweek Downplays Unfavorable Points, IBT Media Fires Back: IBT ‘lawful and legal’ Newsweek owner, state attorney; Dev Pragad as presumed owner a ‘fiction’, ‘facade’) and in a recent lawsuit against Pragad. This includes the original claim that Dev Pragad does not own any legitimate stock in Newsweek. Davis has also previously stated that Pragad himself is the target of an investigation, which Newsweek declined to report on.

It’s fitting that Newsweek continues to use an outdated photo to fit the story rather than the facts. The Olivet campus has been greatly revitalized since the purchase of the property. Olivet said in a recent press release that the campus will be rapidly developed to help evangelicals around the world. 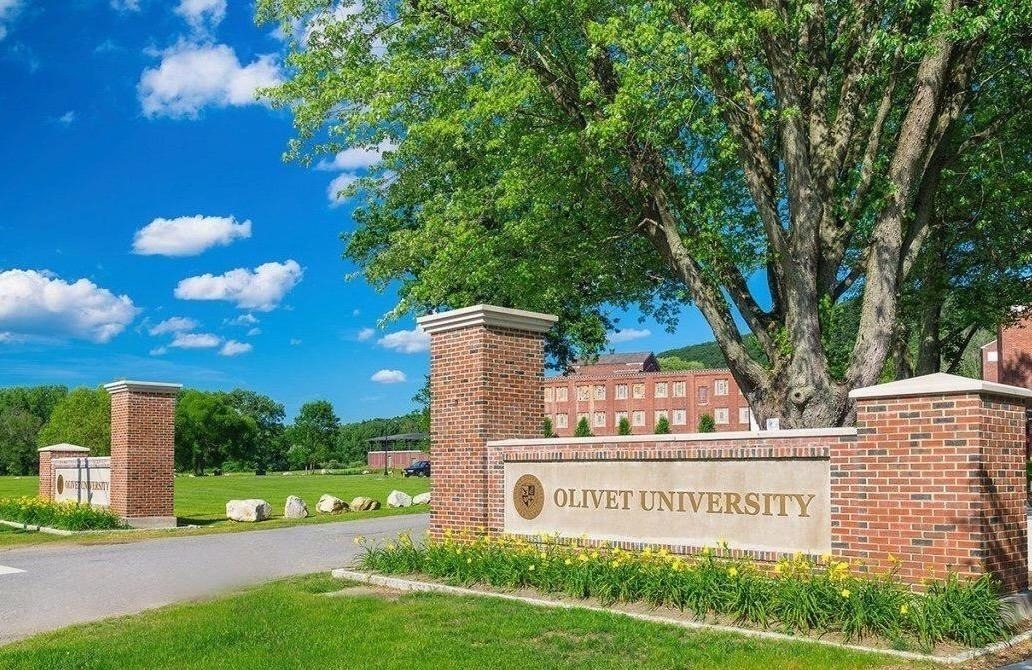