NANO 2 MEET YOU! VOOPOO DRAG NANO 2 is launched with a bang!

On the 18th of October, VOOPOO officially announced the overseas launch of the new DRAG NANO 2 product.

After two years, the second generation of the NANO series has been launched, with a striking design and multiple advanced technologies such as three gears of output and top e-juice filling. The NANO 2 is a double upgrade in terms of value and features.

A couple of weeks ago, a design document named U055 was leaked on major vape sites and has sparked a lot of interest and speculation. VOOPOO has officially confirmed that the document refers to the new DRAG NANO 2, and that the leaking of it was an oversight during the company’s relocation process. The official said that the control of product information would be strengthened in the future to avoid the leakage of internal documents, drawings, data, and other information. However, this leak has created a lot of buzz on the Internet and vape celebrities and KOLs have been enthusiastically chattering about it, which shows just how attractive and innovative the new NANO 2 is, and how it fits in perfectly with its “A New Big Deal” slogan. 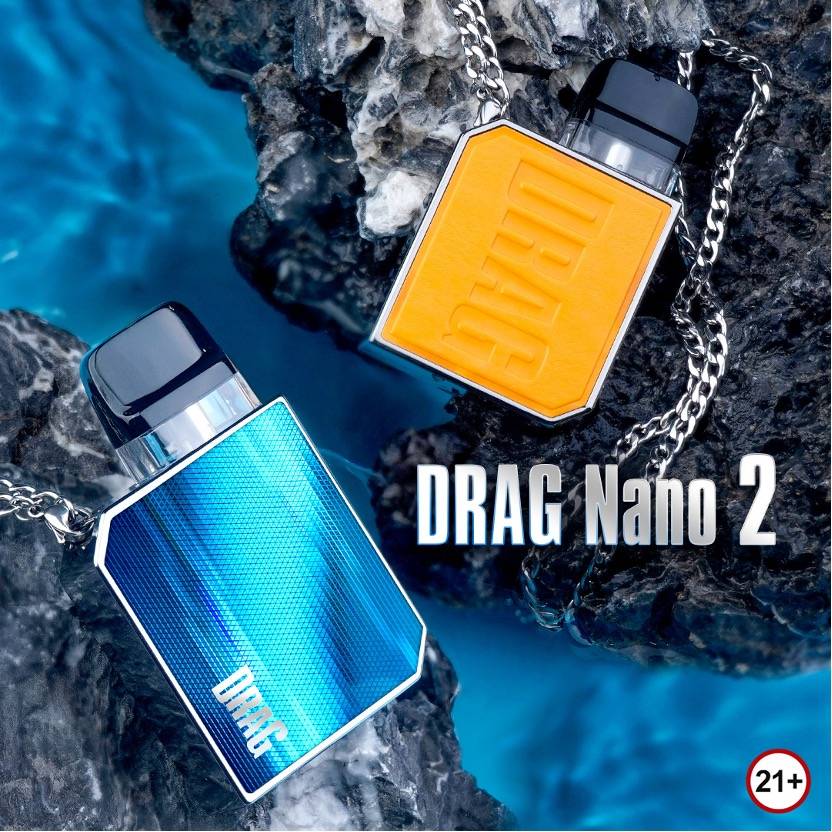 The most impressive aspect of the NANO 2 is its “trendy statement” design. Whether you’re in a sporty skateboarding neighborhood or on a neon RAP stage, the NANO 2, with its own lanyard, will make you the cool guy in the crowd, enjoying vaping anytime, anywhere. The NANO 2 continues the classic angular design of the Drag series, with the materials of zinc alloy, it will bring you ultimate metallic hand feeling. At the same time, the NANO 2 is available in eight color options, three of which incorporate the Vinci Pod ” single grain and single plating” textured pattern design, which gives a stylish 3D effect style when exposed to light. The other five styles borrow ideas from leather material of Drag S Pro, which shapes a perfect combination of hard metal and soft leather. A breakthrough in design, the NANO 2 not only meets all of the vaper’s vaping needs but will also become a must-have fashion item for hipsters.

According to VOOPOO CEO, Everest, “the Drag Nano 2 is not only the flagship product of VOOPOO in the POD category but is also the strategic product of the company for this year, with a leap forward in performance from previous similar products.” Infinite airflow and adjustable power were originally an advanced technology exclusive to MOD products, but after many trials and with the continuous efforts of the VOOPOO researchers, it has been successfully applied to the NANO 2. NANO 2 still has the small size and portability, characteristic of the POD category, but at the same time achieves the smart experience of having “Infinite airflow” + “three gears of output”. NANO 2 can be easily used by POD players or MOD vapers alike, with its miniature body and 8 to 20w of power at your fingertips. It has been reported that many authoritative media in the vape industry, including VAPING360, have conducted in-depth reviews of the NANO 2 after getting samples. Michelle, the senior editor of ECIGCLICK, has recognized the NANO 2 as a “great innovation” and has described its design as “floating her boat”, and she is very optimistic about its performance in the market.

Founded in 2017, VOOPOO has rapidly grown within a short period of time and is now selling worldwide. VOOPOO is a high-tech enterprise integrating R&D, design, production and brand operations. It has four flagship product series: DRAG, VINCI, ARGUS and V Series. VOOPOO has more than 3000 employees worldwide and its business covers more than 70 countries and regions in North America, Europe and Asia.

WARNING: This product may be used with e-liquid products containing nicotine. Nicotine is an addictive chemical.

AI Network Between Vietnam & Australia Set Up – What Could It Mean for Industry?