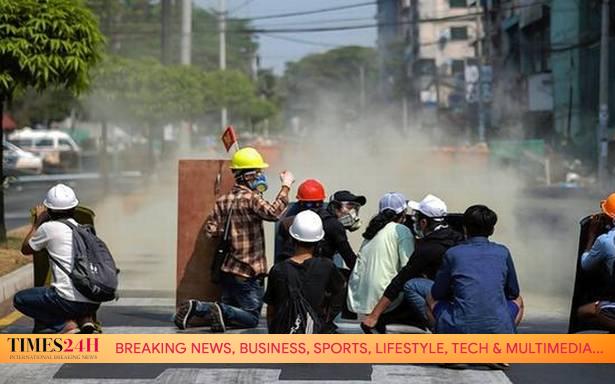 Myanmar police moved decisively on Saturday in a bid to prevent opponents of military rule gathering throughout the country after Myanmar’s UN envoy urged the United Nations to use “any means necessary” to stop a February 1 coup.

The Southeast Asian country has been in turmoil since the Army seized power and detained elected leader Aung San Suu Kyi and much of her party leadership, alleging fraud in a November election that her party had won in a landslide.

The coup has brought hundreds of thousands of protesters to Myanmar’s streets and drawn condemnation from Western countries,with some imposing limited sanctions.

Myanmar police arrested hundreds of protesters on Saturday in their most extensive crackdown on demonstrations against the military coup, the Assistance Association for Political Prisoners (AAPP) rights group said.

“More than 10 prison buses went into Insein prison with about 40 to 50 people in a prison bus. They arrested many people in Monywa too. We are now trying to get the names of the people.”

Uncertainty has grown over Ms. Suu Kyi’s whereabouts, as the independent Myanmar Now website on Friday quoted officials of her National League for Democracy (NLD) party as saying she had been moved this week from house arrest to an undisclosed location.

Police were out in force early in the main city of Yangon and elsewhere, deployed at usual protest sites and detaining people as they congregated, witnesses said. Several media workers were also detained.

Similar scenes played out in the second city of Mandalay,and several other towns, including Dawei in the south, witnesses and media reported.

A protester in the central town of Monwya said police had fired water cannon as they surrounded a crowd.

At the UN General Assembly, Myanmar’s Ambassador Kyaw Moe Tun said he was speaking on behalf of Ms. Suu Kyi’s government and appealed to the body “to use any means necessary to take action against the Myanmar military and to provide safety and securityf or the people”.

“We need further strongest possible action from the international community to immediately end the military coup, to stop oppressing the innocent people… and to restore the democracy,” he told the 193-member group, receiving applause as he finished.

MRTV said he had “betrayed the country and spoken for an unofficial organisation which doesn’t represent the country and had abused the power and responsibilities of an ambassador”.