“Leave our city, stop shooting at the civilians. You’ve already taken everything you wanted. Including human lives” Mayor’s desperate plea to Russian soldiers

The Russian military appears to have taken the center of Kherson, posting screenshots on social media and showing a video obtained by CNN.

The webcam screenshots and the video have been geolocated and their authenticity verified by CNN.

The Kherson Regional Administration Building is located in Svobody Square.

Entering the city: On Tuesday, CNN reported that Russian military vehicles had been spotted on the east side of the city after days of shelling and heavy fighting.

The videos provide new evidence that the Russians are moving through Kherson seemingly unimpeded. It also shows that the Russian troops have advanced from the Crimea and made a crossing over the Dnieper River.

The Mayor’s Desperate Plea: On Tuesday afternoon, Kherson mayor Igor Kolykhaiev posted a grim message on Facebook warning that the city was under attack. “Residential buildings and urban facilities are on fire,” he wrote.

“We are NOT soldiers! But I will keep the city and its functioning as long as I can,” he wrote. “If the Russian soldiers and their leaders hear me. I ask: leave our city, stop shooting at the civilians. You’ve already taken everything you wanted. Including human lives.” CNN’s Paul P. Murphy and Jake Tapper reported.

These parts of Ukraine are occupied by invading Russian forces. 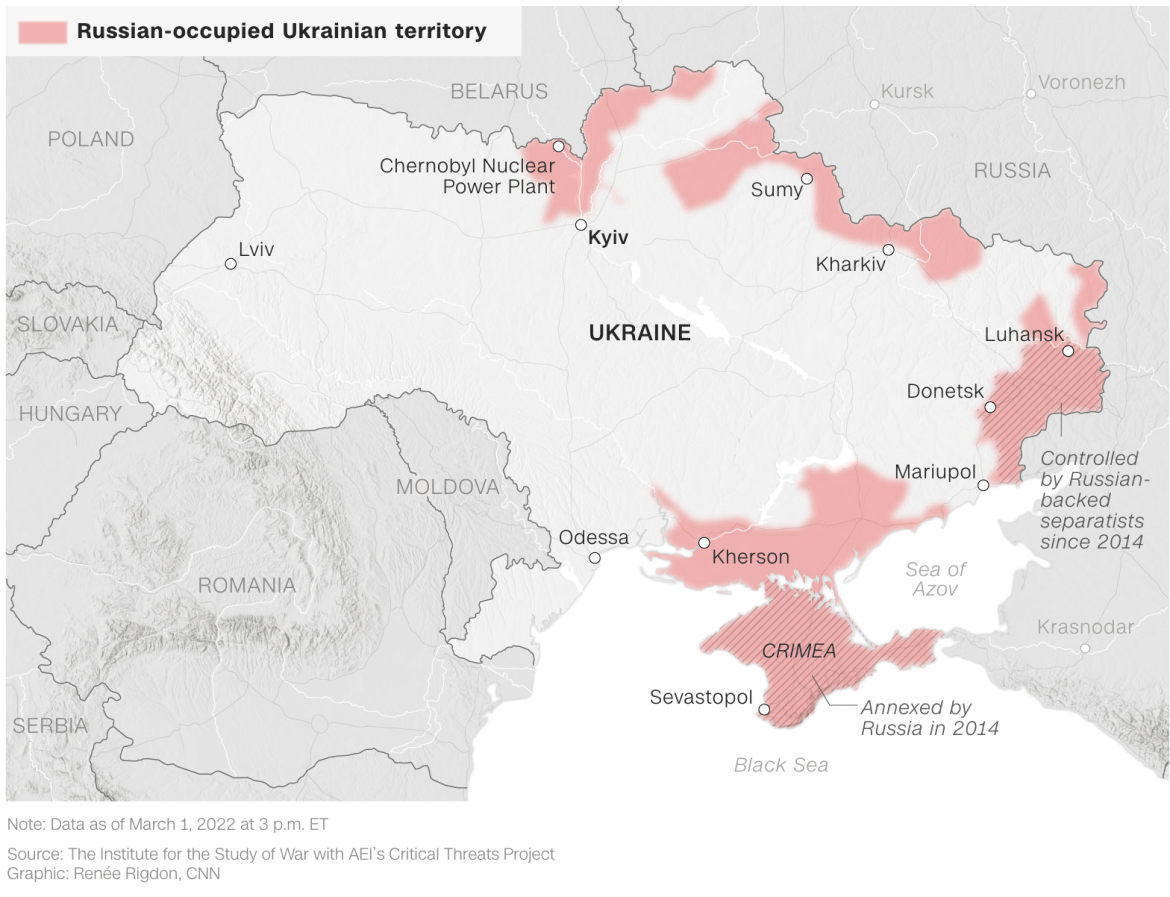 Nearly a week after Russia’s invasion of Ukraine, Moscow’s troops have made great strides in the border regions to the north, east and south of the country, but have faced slower-than-expected progress toward the capital Kiev.

Russian forces on Tuesday attacked key cities from various sides and stepped up their bombardment of Kharkiv, Ukraine’s second-largest city, in the northeast. They also broke through a heavily disputed port city to the south and likely surrounded several others.

Russia has also stepped up its attacks on Kiev, with rockets hitting a Holocaust memorial site in the city on Tuesday. A rocket also hit a private maternity ward near the city, though everyone had been evacuated.

Meanwhile, a 40-mile Russian convoy of tanks, armored vehicles and towed artillery is headed for the Ukrainian capital, according to satellite imagery from Maxar Technologies.