According to Nguyen Trung Khanh – general manager of the Vietnam National Administration of Tourism, the number of Japanese tourists to Vietnam is showing signs of recovery from the COVID-19 pandemic with 28,200 arrivals in the first half of 2022, an increase of 594% compared to to same last year.

The Ehime Provincial Tourism Conference is one of the first tourism promotion events between Vietnam and Japan since the outbreak of the pandemic.

At the event, Governor Tokihiro Nakamura of Ehime Prefecture, Japan, introduced the unique features of tourism in the province.

Ehime is a prefecture in the northwest of the Shinkoku region, a 1.5-hour flight from Tokyo, and is known for many attractions such as the Dogo Hot Springs, Matsuyama Castle, Uchiko Old Town or the Shimanami Sea Highway. kaido.

Typically, the Dogo Hot Spring (Dogo onsen) is where director Miyazaki Hayao inspired the setting of the animated film Spirited Away. With a history of 3000 years, it is Japan’s oldest hot spring.

Visitors to Ehime have the opportunity to experience many interesting activities, such as watching fall foliage in Nametoko Valley, skiing in winter, or biking along the Shimanami Kaido highway…

In addition, Ehime is also known for 40 different types of mandarin. Mr Nakamura said that visitors can enjoy different kinds of mandarins in every season when they come to this beautiful country. 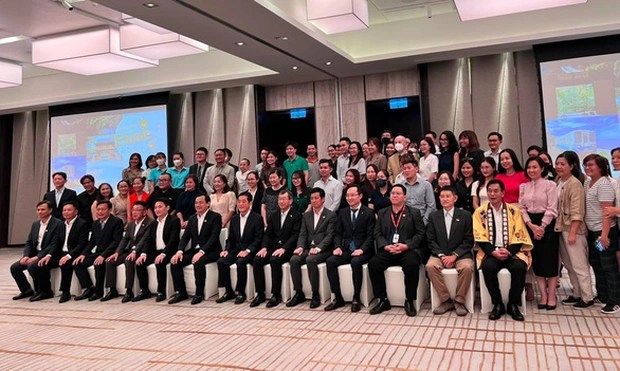 According to the director general of Vietnam’s National Administration of Tourism, the number of Vietnamese tourists visiting Japan also increased rapidly, reaching 500,000 arrivals in 2019, an increase of 27% compared to 2018.

According to Mr. Kenji Yoshida – representative of Japan Tourism Promotion Agency (JNTO), touring is the main method chosen by Vietnamese people when they come to the land of cherry blossoms.

In a March 2022 survey, JNTO found that 61.8% of participants said they often buy a package holiday to visit Japan.

In addition, 69.6% of the participants also said that they mainly get advice from companies that offer travel and travel services for their trip.

Mr Yoshida said these figures demonstrate the important role of travel agents and tour operators in promoting tourism between Vietnam and Japan.