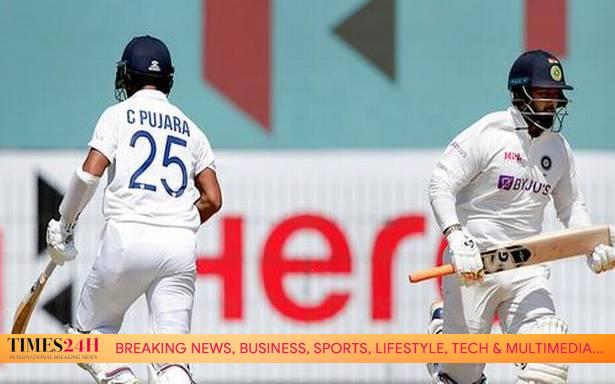 Indian bowlers scythed through the England top half, including picking the vital wicket of Joe Root, but the visitors still extended their overall lead to a formidable 360 runs on the fourth day of the opening Test in Chennai on February 8.

England were 119 for five at tea after bowling out the hosts for 337 for a massive first-innings lead of 241 runs.

Off-spinner Ravichandran Ashwin picked up three wickets to lead India’s fighbtback before Jasprit Bumrah sent back Root, who was looking in imperious form.

Resuming from their lunch score of 1 for 1, England sought to press ahead in the second session with Root doing the bulk of scoring.

With the pitch offering more help than it did in the first innings, Ashwin and Co got into the act.

Ashwin returned impressive figures of 3 for 49 while Ishant Sharma (1/17) picked up his 300th Test scalp in his his 98th match when he had Dan Lawrence trapped in front of the wicket.

Lawrence (18), touted as a good player of spin, looked to find ways to negate the Indian bowlers and added 32 runs with Dom Sibley (16) before the latter was castled by one that bounced from Ashwin, resulting in an inside edge which flew to the leg-slip.

Lawrence fell to Ishant off a ball that came in sharply.

Ben Stokes did not make the impact expected of him after a blazing 82 in the first, edging Ashwin while playing from his body to give the off-spinner his third wicket.

Bumrah then had Root plumb in front with a delivery that kept low. Root played some lovely strokes on his way to a 40-run knock.

Earlier, Ashwin had struck with the very first ball of second innings as England survived two testing overs before lunch.

Refusing to enforce the follow-on, the visitors were 1/1 in two overs at the lunch break.

Ashwin, opening the bowling in the second innings, got one to turn and bounce and had Rory Burns (0) edging to Ajinkya Rahane at first slip.

Responding to England’s mammoth 578, India were all out in 95.5 overs and fell well short of the follow-on target despite Washington Sundar’s fighting knock of 85.

Rishabh Pant (91) and Cheteshwar Pujara (73) have been India’s other major contributors.

Local player Washington missed out on what would have been a well-deserved maiden Test hundred after hitting 12 fours and two fine sixes and sharing an invaluable partnership of 80 runs for the seventh wicket.

Washington was left stranded when Jasprit Bumrah was superbly caught in the slips by Ben Stokes to give Anderson his second wicket and signal the end of India’s innings.

Leach, who take a hammering at the hands of Pant on Sunday, broke the stubborn Washington-Ashwin partnership when he had the latter caught by ‘keeper Jos Buttler diving forward after the ball came off the glove.

Ashwin made a patient 31 and, along with Washington, helped India defy the England bowlers for a long period.