Herd immunity: with new coronavirus variants, can we ever get there? – Talk Around Town – Vietnam News | Politics, Business, Economy, Society, Life, Sports 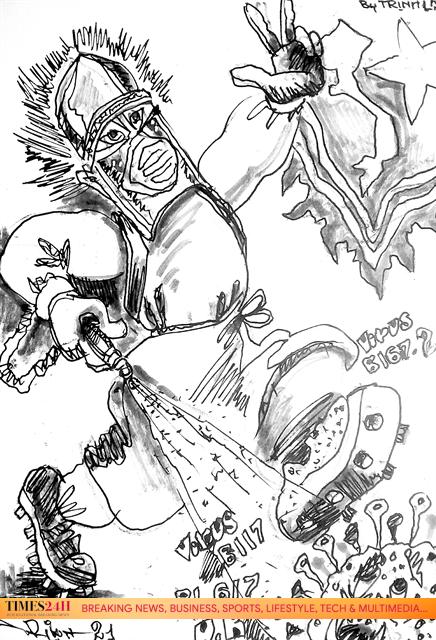 
Even if you’re not a football fan, you will have come across images of Chelsea fans celebrating their team’s win over UK rivals Manchester City in the Champions League final on May 30.


The Chelsea fans jumped and hugged one another in their joy.


Few of them were wearing masks or any other form of respiratory protection during this deeply troubling COVID-19 time.


Does this mean the UK is safe for people to drop their masks? “Looks like the UK has been doing very well, people can get together and watch a football match without masks!” a thought rushed through my mind.


In private group chats, some people were excited about the win as they saw an image of pandemic relief.


Don’t get it wrong! The UK has been one of the top countries in terms of vaccine rollout with almost 65 million doses given out. Thirty-eight per cent of the total population have been fully vaccinated with two doses.


The UK is slowly getting closer to the 50 per cent threshold, which some virologists say is enough to reach so-called herd immunity. Others argue that the threshold should be higher at 70 per cent. Would the nation’s more vulnerable population (children under 12 who cannot be vaccinated, or the elderly with pre-existing conditions) then be protected?


For those who proudly show they are vaccinated, bear in mind that you’re not safe until everyone else is safe. The danger of the coronavirus coming back has never been more destructively real than now.


On May 29, Việt Nam presented its latest discovery of a new COVID-19 variant, a hybrid between the UK variant and Indian variant, Minister of Health Nguyễn Thanh Long announced.


Genetic sequencing at the National Institute of Hygiene and Epidemiology, often known as the Hà Nội Pasteur Institute, found a mutation of the spike protein S, similar to that of the B.1.1.7 variant from the UK on the B.1.617.2 variant from India.


Lab tests of this virus show it multiplies faster and spreads further in the air, according to the institute’s report.


Việt Nam has been struggling to identify the sources of new cases, contain infected companies, communities, even an entire province like Bắc Giang and most recently, the country’s biggest and most populated metropolis of nearly 9 million people, HCM City.


The most recent outbreak of more than 200 positive cases in the city has led to two weeks of social distancing.


More importantly, it’s also a vibrant economic hub, which contributes 22 per cent to the national GDP and 27 per cent of the national budget.


From the first day of this fourth wave’s positive cases, April 27, until 6am June 3 as many as 4,780 community cases have been recorded, a dramatic increase from more than 1,500 cases in the total three waves before this one, with the daily increase in excess of 200 cases.


The question everyone has been asking is, how long can we resist rising tides around our borders? How do we maintain the records we’ve set in this unbalanced fight, provided the limited health and financial conditions we have?


Virologists say there are two ways to reach herd immunity, with one involving more than 70 per cent of the population getting infected and then cured. The point of being infected is to have the virus in your system so that your body produces antibodies to fight the invading virus.


The question is, does anyone want any of their loved ones to get infected to reach herd immunity? Seventy per cent of Việt Nam’s population means nearly 70 million people (the country’s population in 2020 was 97 million). It means that seven out of 10 people must be infected to stop the virus from spreading further.


The second way to reach herd immunity is by vaccination. In the above-mentioned case of the UK, where 38 per cent of the total population have been vaccinated, it won’t take too long for the rest of the vaccination programme to go as planned.


When we get vaccinated, then our bodies produce antibodies without actually having the disease. But can the vaccines protect us from the new and developing variants of coronavirus?


If you are living in a region that’s detected a new variant, then re-vaccination can be an option. But what if the variant comes much earlier than the vaccine to treat it becomes available, and are we ready to turn our bodies into bags of vaccines against all variants of this virus?


A quick search on the internet gives you other reasons for seeing herd immunity could be beyond reach for a long time.


If certain people refuse to take vaccines, for religious beliefs, for doubts of the effectiveness of the vaccines (the way it was created, storage or the correct amount of dose injected into your body), the threshold number cannot be reached and the virus will keep spreading.


When what you read and watch every day is vaccines and herd immunity, you tend to think that we all have a reliable path to fight the pandemic. But early relaxation may make everyone pay a price.


As I am writing this column, the third batch of young medical students from Hà Nội Medical University has been deployed to assist the health staff in Bắc Ninh Province, one of the most heavily affected out of 33 provinces that have reported positive cases in this wave.


A day earlier, a photo of a smiling bright young medical student from HCM City having his head shaved before leaving town to assist Bắc Giang, the hardest-hit province so far, went viral on social media. “A smile that causes so many eyes swelled up with tears,” reads a comment. He was so young, inexperienced, and heading for the most challenging mission of his youth. He needs to protect himself to save lives.


Until new vaccines for the new variants and hybrids of them can be studied and pass lab tests, reality demands that the ailing health system has to treat, feed, and clean up for the 5,000 patients, with many times more close contacts currently quarantined in hospitals, university dorms or military camps across the country.


The heat of the summer is here and with temperatures of 40 degrees Celcius that feel like 53, for health workers wearing PPE for hours in places without air-conditioning, far from home and with endless amounts of work to do, you must be an alien to not feel compassion for them.


Just make sure you have a heart that’s still beating and wear that damn mask.


I felt utterly angry to see a handful of people, not ignorant but maybe their brains ceased to process information because they were in the comfort of an airconditioned office, posing for a group photo and only one of them had a mask on.


And Việt Nam has not reached the vaccination percentage of the above-mentioned country, where Chelsea fans could jump up to cheer their victory. VNS