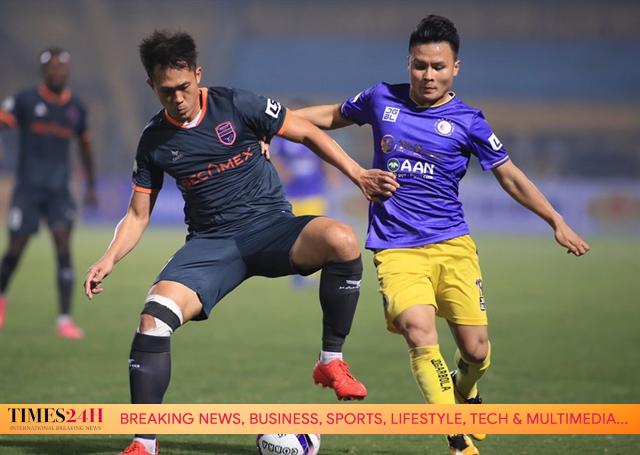 
Title favourites Hà Nội are without a point and rooted to the bottom of the table after two matches.


The former champions, home to seven Golden Ball winners and several Silver Ball holders, suffered a humiliating 3-0 defeat to Nam Định in the opening match early this month, which was followed by a 2-1 loss to Becamex Bình Dương at home last week.


“Losses and wins happen at the same time in football. When we lose we will have to find our weaknesses. We sat down and discussed how to solve our problems,” said Hải.


“The losses made us more understand each other and we will overcome this tough time and be back stronger,” he said.


The team have perhaps the most talented squad in the league but key defenders Đỗ Duy Mạnh, Trần Đình Trọng and Nguyễn Thành Chung are all struggling with injuries.


A twisted ankle kept 2019 Golden Ball winner Đỗ Hùng Dũng on the bench in the second match while Moses Oloya was sidelined due to a muscle injury. Meanwhile, newcomers Bruno Cantanhede and Geovane Magno have yet to fully gel with the team.


After the defeat to Bình Dương, coach Chu Đình Nghiêm admitted Hà Nội may finish out of top six if they could not improve their form. He said the two losses were not yet a big problem but if the team did not wake up now, things would get worse.


“This year, all teams are strongly supported and they prepare well with quality players. They all have potential and we need to keep our eyes on them all,” said Hải.


The midfielder said the new format of the league (which will split into a group of six teams to vie for the title and eight to battle to avoid relegation towards the end of the season) brings challenges not only for Hà Nội but other teams.


“First, we target the top six which, in my opinion, will include Hoàng Anh Gia Lai, Bình Định, HCM City, SHB Đà Nẵng and Viettel. And then, we aim for the top podium,” said Hải.


In the third match on Saturday, Hà Nội will visit surprise league leaders Hải Phòng at Lạch Tray Stadium, but without fans in attendance due to recent community cases of COVID-19 in Hải Dương and Quang Ninh provinces.


In their last three meetings, Hà Nội won twice at home but lost away to Hải Phòng.


In other matches, Hồng Lĩnh Hà Tĩnh seek their first win when visiting SHB Đà Nẵng in the earliest match of the third round today; Thanh Hóa will have Bosnian midfielder Gramoz Kurtaj to face Nam Định who released him only days ago; Sài Gòn FC will face Sông Lam Nghệ An; defending champions Viettel will host Bình Dương; and Hoàng Anh Gia Lai will entertain Bình Định.— VNS