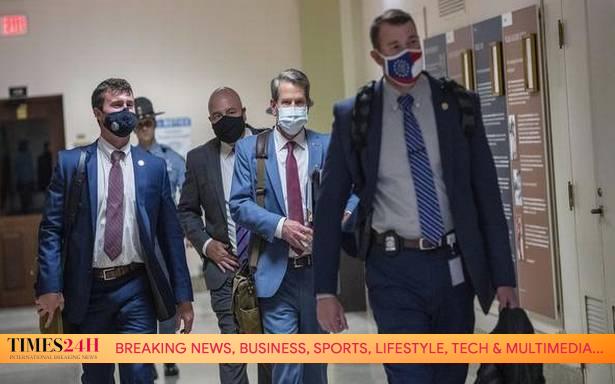 The U.S. State of Georgia passed a law on Thursday, making ballot access more restrictive as Republicans across the country consider similar moves. Democrats and other critics of the law said it was targeted against Black voters and reminiscent of the Jim Crow (segregation) era. Several activist groups have mounted legal challenges to the law.

The new law’s controversial provisions include a cut in the number of weeks during which people can ask for absentee mail in ballots, restricted locations for ballot drop-boxes, outlawing the provision water to those standing in line at the polls, a prohibition on ballot counters taking breaks during counting. Crucially, the law increases the control the state legislature has over the election machinery.

Georgia Governor passed signed the bill into law within two hours of the GOP-controlled State Assembly and Senate passing it along party lines. Mr Kemp tweeted that the law would make Georgia’s elections “secure, fair and accessible” a picture of him signing the bill — surrounded by six men, all of whom appear to be white.

Since former U.S. President Donald Trump’s defeat at the polls last year, Republicans have proposed more than 250 bills limiting voter access, according to a Reuters report. Mr Trump and his team had unsuccessfully litigated claims of voter fraud in multiple lawsuits across the country. U.S. President Joe Biden , then a candidate, won Georgia, flipping the state after nearly two decades. The Democrats also flipped both Georgia seats in the U.S. Senate in run-offs held in January this year.

At his first press conference since assuming office, Mr Biden, on Thursday, called the law “sick” and “ un-American” and said he would do everything with allies in Congress to stop the law from moving forward.

One State lawmaker, Georgia Park Cannon, who is African American, tweeted a video of her being arrested for knocking on the governor’s door. Later she tweeted that she had been released from jail. “I am not the first Georgian to be arrested for fighting voter suppression. I’d love to say I’m the last, but we know that isn’t true,” she said. The video shows two White officers handcuffing Ms Cannon.

Recently elected Georgia Senator Jon Ossoff tweeted out his support for Ms Cannon, suggesting she was charged with a felony unfairly, “For ‘knocking on Gov. Kemp’s office door’ as she tried to observe the cowardly closed-door signing ceremony for the voter suppression law.”