Foden could be a “Bad Boy”, but he is the NextGen star of England

Phil Foden was acknowledged as a bad boy of England after the call girls incident in Iceland. But after all, he bounced back with a strong fighting spirit and kept showing a promising future.

Welcome back to the NextGen series with a story about Phil Foden, the future maestro of Manchester City, the Citizens!

The playmaker of Manchester City, Phil Foden, and the forward of Manchester United, Mason Greenwood were reported to bring four girls to a hotel room of the England national team in Iceland on Sep. 7th. The incident broke out and as a result of violating the social distancing rules of the national team, Foden and Greenwood were both sent home at the same time. Foden luckily got his recall to the national team in the most recent call-up of November. Anyway, Manchester City was considered as a “Bad Boy” of English soccer after the call girls incident, and his future was a big question back then.

Perhaps, Foden is a “Bad Boy”, still, he is a talented player who has the potential to lean toward the highest level of the soccer world.

Not every player could train with the Manchester City first team at the age of 17, but Foden did it.

He practiced with his idol – David Silva – on the week-days, and on Saturday, the players played for the England U-17 national team. He led his national side to the World Cup glory in India in 2017, accompanying him were several outstanding prospects such as Rhian Brewster, the best goalscorer of the tournament. Phil Foden was the Golden Ball winner of that tournament, and after the glory in the South Asian nation, he joined the first team of Manchester City in the pre-season tournament of 2017/2018.

Pep Guardiola described his young talent as a gift from the academy. The Spanish coach said that Foden was so mature at the first place, and he always wanted to look forward. “He was from the beginning so mature, he handled the good and bad things and put aside the good and bad moments, and just thinks about the next thing,” Guardiola said on the Guardian.

Foden graduated from the academy of Manchester City in the season of 2017/2018, but in the last three years, the Englishman usually spent his time outside-looking.

However, it was a good thing for such a young but insurgent talent like Foden. The call girls incident that happened earlier this year in September showed why Pep Guardiola had no rush on his talent. Foden is talented, but in order to turn a potential talent of the moment into a bright superstar of the future, Guardiola has to be careful and patient. During his 4 years at Manchester City (from 2016), Guardiola has observed Foden closely, and he graded the Englishman as the future of the Citizens.

After the departure of the veteran David Silva in the summer, an opportunity for Foden to play in the regular starting-11 squad of Manchester City has arrived.

The club recently has been through the worst beginning of a season, but it could be more undelighted if Foden was not there. Guardiola is happy with what Foden has done so far. Nonetheless, the Spanish coach confessed that “he was so good in the previous season.”

“He is a guy that always gives 100 percent effort because he is young, he has energy,” Guardiola said.

Guardiola gave the young lad a chance to play with the first team, and the Spaniard observed some positive results from his player. Nevertheless, the former coach of Barcelona and Bayern Munich has to thank Joe Makin, a Manchester City’s recruitment coordinator, for bringing this lad to the academy. Twelve years ago, Makin decided to let Foden join the academy of the Citizens after a long period of time scouting the player.

Until now, it is still one of the most correct decisions of the recruiter. “I remember one particular game when he was still a young kid and one of the parents behind us said, ‘You would pay money to watch this lad’,” Makin recalled his beautiful memory with Foden.

People now don’t just pay money to watch Foden playing, clubs around Europe want to pay money for the midfielder. “We all knew very early on that we were watching something special,” Makin said. In the first place, Makin and his fellows were able to watch such a special kid. Right now, they are watching a mature guy at the age of only 20. Foden is young, but he is mature and ambitious to move forward.

What is so special about this young guy is his patience. Foden has no rush to force Pep Guardiola to use him. Instead of forcing and demanding, Foden was waiting in the last three years, and whenever he got an opportunity to showcase for the Citizens, the player did it well.

“He played a lot of games and every time he was decisive in many aspects – playing 10 or 90 minutes it doesn’t matter,” Guardiola said about his prospect. In this season of 2020/2021, Foden has played for Manchester City a total of 12 games, and the youngster scored 4 goals for the Citizens. 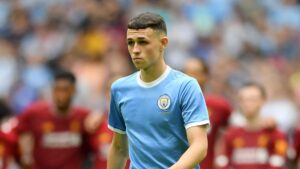 At the age of only 20-year-old, his current teammate Raheem Sterling was an expensive signing of Manchester City, but Foden has only started to put his fingerprints into the first squad of Manchester City. The process of Foden is slower, but it is consistent and helpful for the insurgent star.

In the last two seasons, Guardiola only used Foden in domestic cup matches and European tournament matches. Everything changed in this season when David Silva left the club and Kevin De Bruyne was absent because of injury. Foden stepped up and took the lead of the team. Without him, Manchester City could even suffer more. He scored four goals for the team, displayed in 12 showcases, assisted twice times, and performed a total of 765 minutes.

At the beginning of the new season, the media has destroyed his future by accusing him and blaming him so badly for violating the social distancing rules. The “Bad Boy” now stepped outside his comfort zone and proved that all of those accusations against his professionalism were wrong. Probably, Foden is still a “Bad Boy”, but that is the interest of the soccer world.

Sometimes, a soccer player doesn’t have to be a good guy to be loved. A bad boy like Foden could reach the highest level of the soccer world in the future.