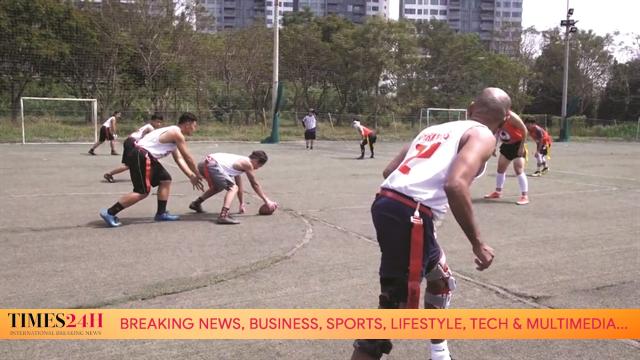 
While the NFL season’s climax is taking place more than 15,500km away from HCM City and all the glitz, otherworldly athleticism and violence of American football barely makes a blip on the Vietnamese sporting radar, a safer version of the game is slowly gaining a foothold in HCM City.


Flag football does away with the bone-jarring hits that full-contact football has become infamous for and ball carriers are instead tackled by removing a flag hung on their belt.


Two flag leagues have popped up in the southern metropolis over the last year, keen to spread the love of the game and show that Vietnamese athletes can do anything Tom Brady can.

Love for the game


The Dang is commissioner of the Vietnam Flag Football League (VFFL), which started in early February last year with just six or seven people in a park and has grown to six teams with a total of roughly 90 players, male and female.


Dang, who was born in Việt Nam but raised in the US, grew up playing flag and tackle football in Washington State and was keen to bring the American sport to Việt Nam.


“We just kind of built a community together,” he said of the VFFL’s early days, adding that “we saw that there was just a lot of interest” in playing the sport in HCM City.


Dang said after playing pick-up games for a while the league’s early players decided to formally establish a league with a board, which eventually led to completing a full competitive season with playoffs, stat-keeping and a championship.


“I just got the love for the game,” he said, adding, “because we miss the sport and we’re able to bring the sport to Việt Nam, we’re able to show the locals it’s a lot of fun.” 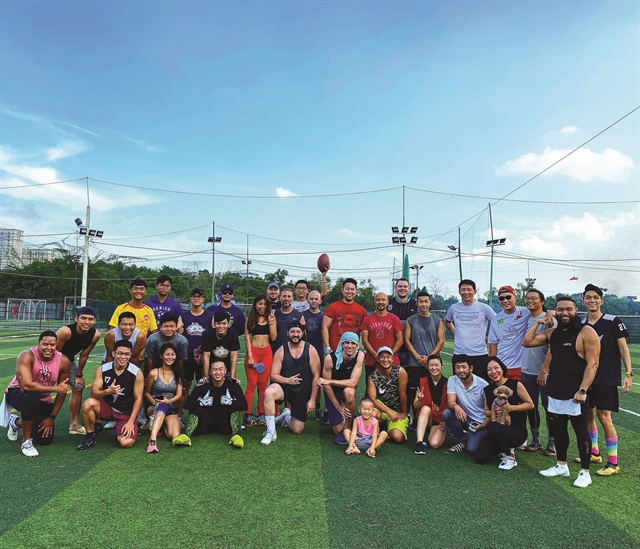 
The league is made up of a mixture of local Vietnamese people and foreign residents of the city, some of whom had never played flag football before the VFFL, which can make explaining the intricate sport challenging, but rewarding, according to Dang.


“We have people that are Vietnamese here, obviously. And so they get into as well, they get excited as well and they want the community to grow. They want the sport to grow. So they step in and they help explain it a little bit.”


Dang added that running the league has even helped him get in touch with his Vietnamese roots by helping him better understand local culture and ways of communicating.


“It’s almost like getting a hands-on (experience) of how to understand your own roots for myself,” he said.


AS Turner is the chairman of HCM City’s other flag football league, the Saigon Flag Football League (SFFL) which started last summer and shares the VFFL’s desire to grow the game in Việt Nam, albeit with a slightly different approach.


“We started this league because we want flag football to become a bit more popular in Việt Nam. But we also didn’t necessarily want only people who already knew how to play to come in and play,” the American said.


“We want to create a league and which was open to people who didn’t have any experience playing flag football, but actually were interested in actually learning how to play and putting in some effort and training and to become better at the sport.”


The SFFL runs as a pick-up league at the minute and averages 20-30 players per session (also both male and female), 60-65 per cent of whom Turner said are Vietnamese.


Turner explained the SFFL is focused more on creating an accessible environment for the sport than on competition and though there are plans to form teams in the coming weeks and run a tournament, seeing beginners develop their skills brings him the most enjoyment.


“It’s amazing to see someone when they first start say, ‘No, I’m scared. I can’t do this.’ And then a few months later they fall on the ground after trying to dive to catch the ball, they get up like ‘Give me the ball! I want the ball next! I want to do that again!’” he said.


Both Turner and Dang hope to help grow flag football in HCM City as well as other cities in Việt Nam, while Dang said the VFFL also has longer term ambitions to apply for official recognition from Vietnamese sporting authorities and push to create a national team and Turner said he hopes to start a youth league in HCM City.


As for full-contact tackle football, while Dang is more optimistic than Turner about the sport’s potential in Việt Nam, both agree that flag football is the best way of introducing the sport and increasing its popularity in the country.


While the day a Vietnamese quarterback leads his team to Super Bowl glory may be a long way away, these two leagues could very well lead to the creation of Việt Nam’s answer to Tom Brady. VNS

TechTimes Editors’ Choice 2020: The advisors team of the award (P.2)