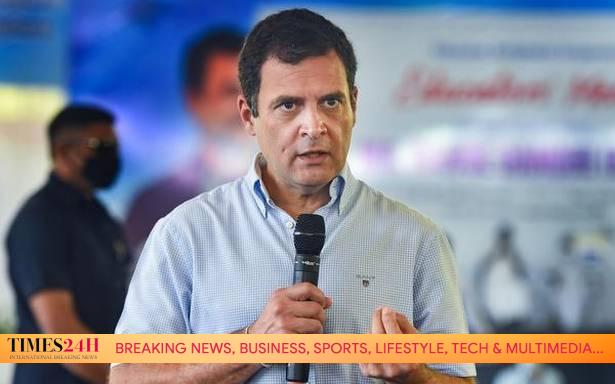 It is ridiculous to have a debate on “need versus want” on COVID-19 vaccination, he says

Former Congress president Rahul Gandhi on Wednesday said it was ridiculous to have a debate on “need versus want” with regard to the COVID-19 vaccination and every Indian deserved the chance to a safe life.

Mr. Gandhi’s tweet was in response to Health Secretary Rajesh Bhushan’s comment at a press conference on Tuesday where he had said the government’s aim was “to vaccinate all those who need and not all those who want the vaccine”.

Mr. Bhushan said vaccination drive is aimed at curbing deaths by targeting groups that are most vulnerable.

“It’s ridiculous to debate needs & wants. Every Indian deserves the chance to a safe life,” Mr. Gandhi said on Twitter.

In another tweet, the former Congress chief also shared a video of police mercilessly beating up a person in Indore for not wearing a mask.

“In the name of enforcing corona rules, such shameful inhumanity is unacceptable to the country. Where will the people go if the police, instead of protecting people, start torturing?” he asked.

At the Congress party’s media briefing, spokesperson Pawan Khera reiterated the point of vaccination for all and asked the government to approve more manufacturers to have a diversified pool of vaccines.

“It’s a very insensitive comment…..I ask him who decides that a bureaucrat gets the vaccine and a delivery boy doesn’t,” asked Mr. Khera.

He said the second wave could soon turn out to be a tsunami if the government didn’t acknowledge it’s gravity.

“India has surpassed both the U.S. and Brazil to bag the number one spot in terms of having the highest new positive cases daily,” he said. “One in every seven new cases across the world is that of an Indian.”

He claimed earlier 10 infected patients were spreading it to eight others but now that has increased to 14 others.

“The height [spike] of the COVID-19 cases is alarming, and the width [duration] of the cases needs to be curtailed now before this wave turns into a tsunami…Diversification of vaccines based on their globally proven track record must be looked at immediately,” Mr. Khera said.

“..this shows that countries that have access to a diversified pool of vaccines are not just surging ahead in terms of vaccinations but are also seeing a relatively low new case loads.”

He said while 6.5% or over 23 lakh vaccine doses went waste in March (with Telangana and Uttar Pradesh being the highest), several States like Rajasthan, Andhra Pradesh and Maharashtra were facing shortages.

The government should also address the issue of paucity of funds faced by manufacturers and create awareness among people through citizens groups and political parties to take the vaccine, Mr. Khera said.