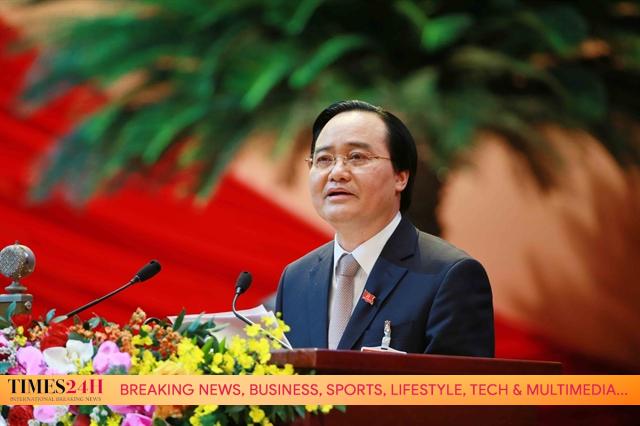 HÀ NỘI — Remarkable results have been achieved seven years since the implementation of Government Resolution No 29-NQ/TW of the Party Central Committee’s 11th tenure on education and training renovation, said Phùng Xuân Nhạ, Minister of Education and Training.

He made the statement on Wednesday at the 13th National Congress’s discussion regarding draft documents.

Universal primary education has been achieved in Việt Nam.

“The percentage of six-year-old children enrolled in the first grade, which is at 99 per cent, ranked second in ASEAN, after Singapore,” he said.

“This is a bright spot in our country’s educational innovation and appreciated by many countries and international organisations.”

The Ministry of Education and Training (MoET) has implemented a new general education programme with an international approach, he said.

“The new general education programme, which was issued at the end of 2018, is expected to substantially solve the limitations of the current programme, focusing on developing the quality and capacity of learners,” the minister said.

Nhạ said university autonomy was strengthened, and positive changes have been seen in the quality of university education. However, he admitted that there were still shortcomings.

The shortage of teachers hasn’t been solved in some localities, the minister said.

Information technology and other facilities for education are not synchronised in several areas, especially in remote and disadvantaged places.

To realise the target of a comprehensive renovation of education and training in 2021-2025, he said the MoET would work with other ministries and localities to carry out solutions including reforming State management mechanisms and school governance.

In addition to paying attention to improving the quality of teachers and managers, it is necessary to streamline the Government payroll while ensuring human resources for educational establishments, he said.

The ministry will hasten digitalisation in the sector along with reviewing educational system planning, he said.

Speaking at the congress, Minister of Agriculture and Rural Development Nguyễn Xuân Cường said in the next five years agriculture will still be the strength of the country, offering sustainable livelihoods and incomes for many workers. It will ensure national food security in all circumstances and contribute to ensuring socio-economic stability.

However, the sector faces a lot of challenges.

“Việt Nam’s agricultural production is still on small scale and scattered. This is a bottleneck in international integration, reducing competitiveness and causing difficulties in the quality, processing and price control,” he said.

The MARD agreed with the Congress’s draft documents which considered developing commodity agriculture on a large scale towards modernisation, application of high technology, increase of added value and sustainable development, Cường said.

Other tasks including promoting smart, green agriculture and adapting to climate change and continuing to implement the national target programme on building new rural areas in the direction of linking with urbanisation and enhancing efficiency and sustainability.

To achieve the goals, Cường said the ministry would conduct dissemination campaigns to raise people’s awareness on developing commodity agriculture on a large scale and the use of high technology.

It will focus on completing policies to drive the development of commodity agriculture and new rural area building. Much attention will be paid to land management and enhancing the efficiency of agricultural land.

Efforts will be paid to information, forecasting the market situation, taking advantage of free trade agreements and international commitments to stabilise and maintain traditional and large-scale markets as well as develop new ones.

Another focus will be on improving the level of science and technology research, transfer and application, particularly on applying the results of the Fourth Industrial Revolution to create breakthroughs.

The ministry will develop suitable production methods and mobilise resources for agricultural infrastructure towards modernisation, international integration and sustainability, ensuring resilience to threats of natural disasters and climate change, he said. — VNS