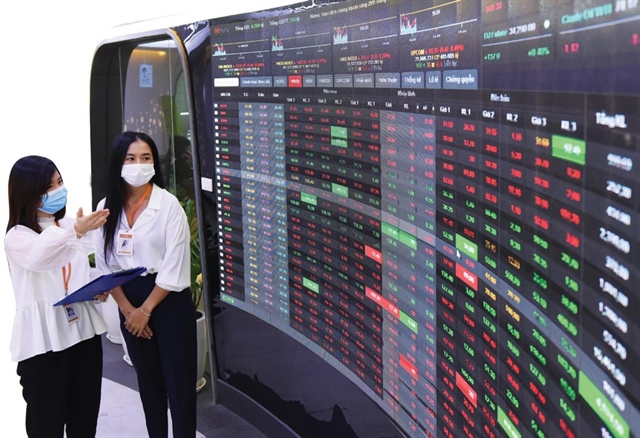 Investors on FPT Securities Joint Stock Company’s trading floor. Since the beginning of 2021, the State Securities Commission has announced five decisions on administrative sanctions for violations of individuals and businesses. Photo tinnhanhchungkhoan.vn


HÀ NỘI Although market regulators detect many violations on the stock market, the penalties are often not proportionate to the profit, and so are of little deterrent to would-be rule-breakers.


According to the State Securities Commission of Việt Nam (SSC), there are hundreds of cases of violations every year relating to information disclosure, price manipulation and stock manipulation.


SSC last year issued more than 300 decisions to sanction administrative violations in the field of securities and the stock market, an increase of more than 80 cases compared to 2020. The amount of money collected from the fines rose 5.6 per cent to reach approximately VNĐ21 billion; in 2020 they totalled VNĐ19.8 billion (US$871,300).


As per the official porter of the State Securities Commission of Việt Nam, from the beginning of 2021 until now, this agency has announced five administrative sanctions for violations of individuals and businesses.


Hương was fined VNĐ80 million for non-disclosure of information about an expected transaction. Hương bought 100,000 shares of Electronics Communications Technology Investment Development Corporation (ELC), equivalent to VNĐ1 billion at par value of ELC shares on July 2, 2021. After that, Hương sold 100,000 ELC shares in August 2021 but did not disclose information about the transaction.


The company committed administrative violations in the field of securities and the stock market by not disclosing information that must be disclosed in accordance with the law.


At the beginning of July 2019, the price of FTM continuously dropped from nearly VNĐ24,000 per share to almost VNĐ3,000 per share. At the time, 11 securities companies and one bank lost hundreds of billions of đồng because of margin lending related to FTM shares.


According to SSC, based on the verification results of the police agency and the inspection results, the consequences caused by the two individuals mentioned above have not reached the level of criminal prosecution.


At the end of July 2021, the SSC issued a decision to sanction an administrative violation against Trần Ngọc Bê, with a fine of over VNĐ940 million.


According to Nguyễn Thế Minh, Analysis Director of Retail Banking, Yuanta Securities Việt Nam, the non-disclosure of transaction information had caused many risks for businesses and investors. The market would become less transparent and therefore more difficult to be upgraded in status. On the investor side, they will lose confidence in the business because transparency is the minimum factor for investors to decide whether to buy a stock or not.


“Although the authorities have detected and handled many violations on information disclosure on the market, most of them were just administrative sanctions. Since most of the fines are small amounts, many large shareholders are willing to trade off fines for profits,” Minh said.


“It is necessary to increase the fine level for the act of not disclosing the expected transaction information, not limited to just VNĐ1.5 billion. This is a very small amount compared to the trading sessions that earned thousands of billions of đồng,” he said.


SSC has advised investors to be careful, avoid being led astray by fabricated rumours flows on social networks. Along with the flourish of securities recently, many groups have been created on Zalo, Facebook, and Telegram to exchange investment information.


In a statement issued on December 28, 2021, the SSC said that it had discovered among those groups that spread falsified rumours, fake documents and untrue information to entice investors to buy and sell stocks. VNS