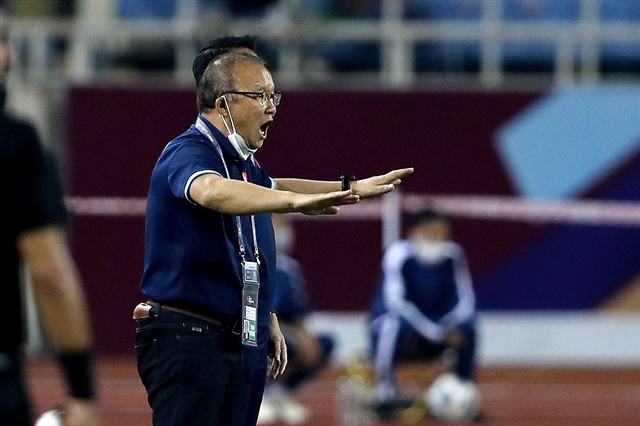 Coach Park Hang-seo issuing instructions during the match between Việt Nam and Japan on Thursday in Hà Nội. — Photo of VFF


HÀ NỘI — Park Hang-seo admitted he has never met such difficulty in his coaching career after the World Cup qualifying match against Japan on Thursday.


Việt Nam, despite careful preparations, lost 1-0 to Japan, recording their fifth loss in a row in the third round of the World Cup qualifiers at Mỹ Đình Stadium.


“My players tried their best but we should look at individual abilities between two sides. We have mostly played against Southeast Asian opposition, but now we are against top Asian teams. My players are not confident,” Coach Park said at the post-match conference.


He confirmed that the poor results have put his coaching staff and players under a lot of pressure.


“I know how difficult it is to earn one point. In this third round, the teams are really powerful. As Head Coach, I have to try my best. However, I think that we should not focus too much on the recent results but on our plan for the future,” said Park, who extended his deal with the Việt Nam Football Federation to 2023 on Wednesday.


“We are still in the process of collecting experience. We need time to do better and our football can develop.”


Speaking to reporters after the game, midfielder Nguyễn Quang Hải said the whole team did as well as they could, although the result was not what they expected.


“Park encourages us in every match, pushing us and giving us positive messages to lift our confidence,” said Hải.


“Japan are a continental-level team; playing against them is never easy. What’s important is our attitude in the match, and I think we all did pretty well, especially playing at Mỹ Đình in front of our supporters for the first time in months,” he said.


“Looking at what this team have done since 2019, they have developed well. Việt Nam is strong in defence and now their attacks are threatening too,” said Moriyasu. “Your coaches and the board have done a good job, assisting and guiding players a lot.”


Talking about the match, he said the match was a must-win for Japan to continue their World Cup dream. He regretted that their second goal was not recognised but overall the two teams had a good game. He was relieved Japan held out for the win.


Japan now move to third position in the group, below Saudi Arabia and Australia. Việt Nam are stranded at the bottom of the table without a point.


Next Tuesday, Việt Nam will host Saudi Arabia at Mỹ Đình stadium, who are top of the table. Japan will play Oman. — VNS