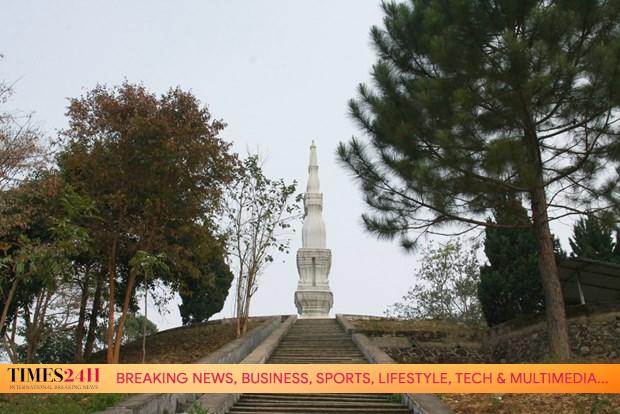 
Mường Và Tower, the 400-year-old cultural heritage in the northern mountainous province of Sơn La, has long been seen as a masterpiece of architecture that connects the past with the present while upholding unique spiritual values.


Located in Sốp Cộp District, the ancient tower is an attractive tourist destination that showcases the beliefs of the Lao ethnic minority.


The tower sees locals come to pray for a peaceful and prosperous life and is said to contain sacred and mysterious stories.


Aside from its spiritual role in protecting villagers, it is also a place used to practise the religious and cultural rituals that are a distinctive cultural feature of the surrounding Vietnamese border areas.


In 1998, the culture ministry recognised the tower as a national architectural and artistic heritage. Today it still attracts a large number of people coming to visit and learn about its architecture.


The Lao ethnic people built the tower in the 16th century in Mường Và Commune with help from locals who were mostly of Thai ethnicity and brought Buddhist beliefs with them as they resettled in the region.


The building was named after Mường Và Commune and is imbued with Theravada Buddhist characteristics as well as being considered the oldest building in Sốp Cộp and a rare example of such architecture in the northwest.


From afar, visitors can see the five-floor tower soaring into the blue sky with its sharp, elegant lines adding to its simple majesty.


The tower has twice been restored to its former glory.


The unique building stands on a 13m-high hill from which tourists can have a panoramic view over Mường Và Commune surrounded by stretching mountains, immense paddy fields and dreamlike streams.


To the Lao local residents, the sacred tower has been hidden deep within community life for many generations.


They believe the tower is a “signifier of the cultural and art values” that characterise the culture and religion of the Lao minority in Sơn La and  the northwest region as a whole.


“Patterns such as human figures and lotus flowers exquisitely displayed on the tower are proof of its cultural values,” said villager Lò Văn Bóng.


“Besides reflecting the spiritual life of the local people, it is also considered a symbol of the special solidarity between ethnic groups in the region and between Việt Nam and Laos.”


“As it is located right at the border of Việt Nam and Laos, it shows the solidarity between the two countries particularly in the cultural exchange between the Lao and Thai ethnic groups in Sơn La,” she said.


According to Yến, the province has paid higher attention to the tower in recent years.


“Along with a focus on implementing two programmes on the tower’s restoration, the province has also built a memorial house to preserve valuable artefacts related to the tower,” she added.


Sơn La shares a 200km border with Laos and is now home to the Lao minority which makes up 0.33 per cent of the province’s population, mostly living on farming in Sốp Cộp and Sông Mã districts.


The province, over 300km northwest of Hà Nội on National Highway 6, is a centre of the mountainous region and has many tourist sites.


The natural beauty and ethnic culture make it particularly appealing to domestic and foreign investors as well as tourists.


Sơn La has 12 ethnic groups, the most populous being Thai, Kinh, Mông and Mường, and 96 sites certificated as tangible cultural and historical heritage which hold a fascination for tourists. VNS