Carrie Lam | In the line of fire 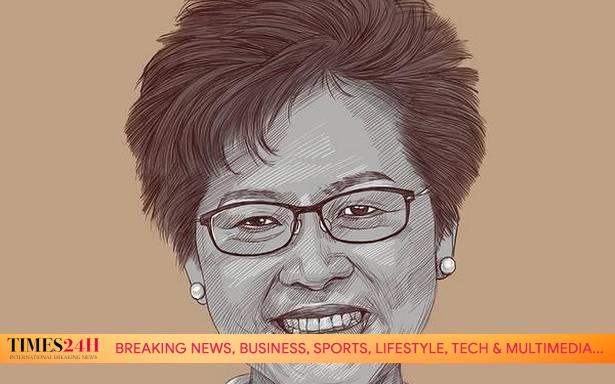 When Carrie Lam was in 2017 appointed as Hong Kong’s fourth Chief Executive — and the first woman to lead China’s Special Administrative Region (SAR) — her appointment by Beijing was greeted mostly with optimism.

Ms. Lam, who was sworn in by President Xi Jinping a month before she turned 60, had over decades of working in Hong Kong’s bureaucracy garnered the reputation of a hard-working, effective and capable bureaucrat. Hong Kong’s civil servants often like to quip that the SAR, as Asia’s financial centre, may not make anything, but it makes things happen. Ms. Lam embodied that spirit.

She acknowledged at her swearing-in that Hong Kong was “suffering from quite a serious divisiveness” and said her “priority will be to heal the divide”. Little would she have imagined that four years on, not only does that divide remain as far as ever, but Ms. Lam leaves behind a controversial legacy that many in Hong Kong say has permanently redefined what it means to be the Chief Executive (CE) of the SAR.

Ms. Lam triggered the unprecedented protest movement in 2019 that brought millions to the streets, by proposing a controversial extradition Bill that would allow suspects to be repatriated to the mainland. The protests against the Bills led to broader calls for democracy and for universal suffrage. Hong Kong’s residents only vote for half of their 70 legislators, with the rest nominated by pro-Beijing bodies. The CE is also not voted for, but chosen by a Beijing-backed Election Committee.

Ms. Lam subsequently wholeheartedly backed Beijing’s crushing response to the protests, starting with a new national security law in 2020 and unprecedented changes to Hong Kong’s electoral system announced on March 30 that have drastically cut the share of democratically elected representatives. The number of elected legislators has been cut to 20 while the Legislative Council has been expanded to 90, thus ensuring a permanent majority for Beijing-nominated politicians and all but ending the pro-democracy movement.

Rise to the top

Born in British-ruled Hong Kong in 1957, Carrie Lam Cheng Yuet-ngor graduated from St. Francis’ Canossian College, according to her biography on China Vitae, and then entered Hong Kong University to study Social Science. According to a Reuters profile, Ms. Lam is the daughter of a Shanghai immigrant and a Hong Kong mother with no formal education, and grew up in a small apartment in Wanchai where “her bunk bed doubled as a desk; she used to stand on the lower tier and rest her schoolbooks on top.” A top-ranking student, she joined the British government’s civil service in 1980, and rose to become Chief Secretary under her predecessor, Leung Chun-ying. When appointed in 2017 by the Beijing-supported Election Committee, Ms. Lam was, in one sense, an expected choice, having proven her credentials as a capable bureaucrat. Yet she would soon find, despite her long experience, her government facing Hong Kong’s biggest crisis since the handover, one that she triggered.

The inherent tensions of the job of Hong Kong’s CE, caught between the demands of the people of Hong Kong and Beijing’s expectations, came to a head in 2019, when the extradition Bill, pushed by Ms. Lam and supported by Beijing, triggered mass protests that presented the biggest challenge to Beijing’s authority in decades.

Martin Lee, a leading pro-democracy politician and barrister who is known as Hong Kong’s “father of democracy” and was convicted last week for organising an unauthorised protest march in 2019, told The Hindu in 2019 that the political crisis was both systemic and of Ms. Lam’s own making. How Ms. Lam became so beholden to Beijing, even as it drastically changed the contours of “one country, two systems”, puzzled Mr. Lee and other politicians who had known her for decades as a playing-by-the-book bureaucrat.

“Through the protests in 2019, did we ever see Carrie Lam defend Hong Kong’s system?” he said. “She should have been defending the Basic Law and Hong Kong’s high degree of autonomy, but instead she was happily sitting with Beijing. The Basic Law requires the CE to be answerable to both Hong Kong and Beijing. But is that possible when she has this job because Beijing gave the job to her? That is a system that was always doomed to fail without democracy and without people voting for their leader.”

That Mr. Lee has now been convicted and is awaiting a prison sentence underlines the dramatic change in Hong Kong’s politics during Ms. Lam’s tenure. Indeed, Ms. Lam will be remembered for presiding over the biggest changes to the “one country, two systems” model that has governed Hong Kong since 1997, guaranteeing a high degree of autonomy and a range of freedoms that distinguished the SAR from the mainland.

In line with the model, the position of the CE was often described as being “one servant to two masters”, with the office answerable not only to the people of Hong Kong and its Legislative Council, but also to Beijing, which nominated the CE, a post created after the handover in 1997 to replace the position of Governor under British rule.

This inherent tension has always made Hong Kong’s top job somewhat of a poisoned chalice, leaving every successive occupant dealing with a widening chasm with growing calls for genuine democracy from young Hongkongers on the one hand, and a decreasing tolerance for accommodating them in Beijing on the other.

Ms. Lam, in one sense, resolved this tension, making it clear that there is, after all, only one master.