In order for Tan Son Nhat Airport to offer the courtesy and formality of an international airport, experts say buses should be considered the primary mode of transport for passengers.

The airport is in Ho Chi Minh City, so local responsibility should be placed with the same management rather than just the airline as it is now. Parallel management will avoid the situation where airport management companies prefer the benefits or profits for the unit, but “lightly ignore” the benefits of public transport.

According to Mr Quyen, airports, ferry terminals and train stations are places for public transport. If there is a place to be managed, there is no situation where the bus is not parked in that place. The City Department of Transport is currently actively developing a plan, prioritizing the development of public transportation and limiting personal cars.

Among the transport forces, Mr. Quyen that it is necessary to give priority to buses as this is a popular mode of transport, has low costs and can carry a lot. One bus can replace dozens of taxis and passenger cars.

Meanwhile, the solution to develop public transportation and limit personal cars is also a government requirement for major cities. Therefore, Tan Son Nhat airport should prioritize dedicated bus lanes in the near future to meet the main role and current travel demand. 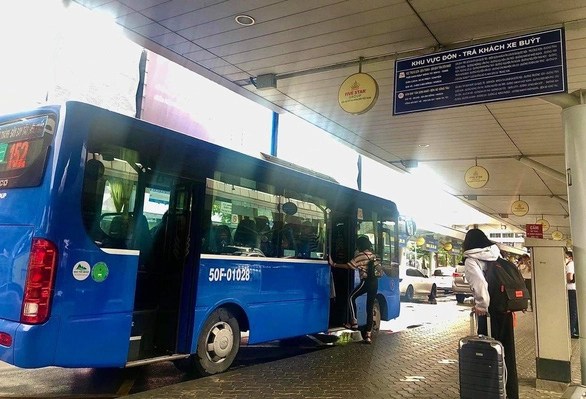 According to Assoc. Prof. dr. dr. Vu Anh Tuan – Director of the Transport Research Center of Viet Duc University, developing a methodical bus system to transport passengers at the airport is a very necessary and inevitable trend.

Tan Son Nhat Airport is the second largest in our country, public transportation should be sufficient to meet the needs of the people. In countries around the world, when passengers get off the plane, there will be a system of buses and trains to continue to other destinations.

From here, guests can take taxis and technical cars home. This option relieves the number of passengers waiting for the car and avoids congestion at the airport.

However, the city needs to research and research how to organize bus routes in the airport, enough to accommodate the transport of a large number of passengers in this area or not? In addition, everyone should think carefully about how the mini satellite parking lot will be built and managed by everyone.

“If you want the image of a well-organized airport and civilized traffic, people’s awareness must also be adjusted. In recent days I have been traveling in Tan Son Nhat airport and have seen a change with guided pick up points where I asked passengers to queue to wait for a taxi in a private area. However, people are still trying to crowd, drivers try to stop for a long time to wait for customers… and also cause traffic chaos,” noted Mr Tuan.