Board of directors remuneration survey out, attracts interest among firms

Most companies have remuneration policies for board of directors that are decided at annual board meetings, according to the 2020 Board Remuneration Survey Report conducted by Talentnet and Vietnam Institute of Directors.

The structure of the remuneration includes base retainer fees, role fees (compensation for additional appointments and responsibilities), meeting fees (by number of meetings attended and meeting types), and additional ad-hoc fees.

A majority of businesses have an annual remuneration budget for board members, with the highest being at financial services due to the risky and complex nature of the business.

The remuneration is mostly decided by a compensation committee or shareholders (32 per cent), with a small proportion of companies having owner or chairperson deciding it. 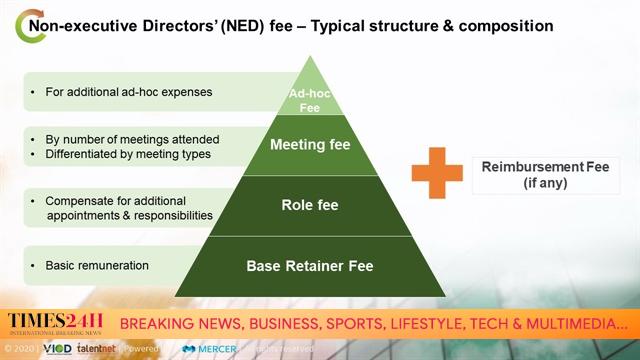 The survey will enable businesses to establish lucrative remuneration policies to attract interest from independent directors with expertise and in-depth business experience.

To ensure objectivity, the board and other committees should strike a balance between independent, executive and non-executive directors.

It was the second year the survey was done, and it received 68 data points, double the rate in the 2019 survey, indicating the increasing interest among companies to standardize remuneration plans for directors.

Other industries represented in it include high-technology trading, retail, life sciences, and agriculture.

Listed companies accounted for 76 per cent.