Defender Lê Văn Xuân of Việt Nam (right) manages a ball during the match against Chinese Taipei at the AFC U23 Asian Cup on October 27. Photo courtesy of VFF


HÀ NỘI  Lê Văn Xuân isn’t your typical footballer. In his own words, he describes himself as “a little short, a little heavy and very quiet”.


The 21-year-old defender also suffers from a rapid heart rate, but despite these obstacles, he has started making a name for himself for club and country.


Last Wednesday, Xuân scored the only goal for the U23’s in their victory over Chinese Taipei with a finish you would normally expect from a striker.


Remaining humble despite scoring his first competitive goal for the national team, Xuân said after the match: “The win is important for our team and we have to strive harder in the next match.”


Born in 1999 in Thanh Hóa Province, Xuân was recruited to the PVF football centre in 2010.


Xuân understood he had a disadvantage because he was so small, but worked hard to sharpen his technique and strengthen his physique.


His hard work paid off and he was offered a contract with Hà Nội FC in 2018.


The early days in the capital did not quite go as planned, and he was sent to League 2 side Hồng Lĩnh Hà Tĩnh on loan last season to gain more match playing experience.


“He is kind of multi-purposed player as he can play well in different positions,” said Nguyễn Việt Thắng, coach of PVF.


“He has good pace over short distances and makes impressive runs to beat other players. He can also score with both feet.


“He also strikes a free kick well from the edge of the box that can threaten any goalkeeper.”


Hà Tĩnh coach Phạm Minh Đức said Xuân has the potential to become an excellent player, adding that as well as defending, he can also play as a winger or in midfield..


After helping Hà Tĩnh win promotion to the V.League 1 in 2020, he returned to Hà Nội where he replaced talented defender Đoàn Văn Hậu who went abroad to play for Heerenveen in Holland.


“His small size prevents Xuân from stopping high balls well and he is at a disadvantage when facing tall and big foreign forwards, ” Coach Chu Đình Nghiêm said.


“But he was not scared of anyone. He can use both his muscle power and his skill in different situations.”


His skills and determination, and the size of his thighs, have earned him the nickname Xuân Carlos after the legendary Brazilian fullback, Roberto Carlos.


He is also called the “big lung man” because of the amount of energy he possesses and the fact he never stops running. 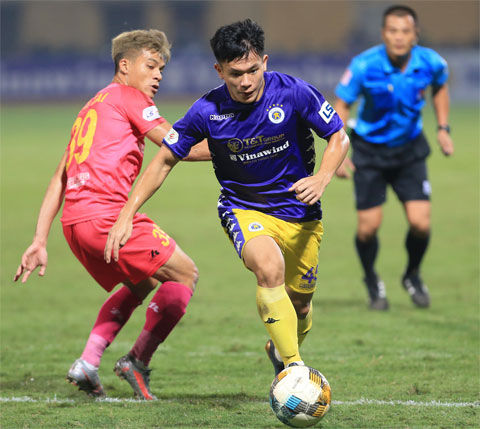 Lê Văn Xuân (centre) during a march against the Sài Gòn FC. Photo of bongdaplus.vn


After moving back to V.League 1 Xuân did need time to adjust and he also had to make do with a place on the bench until his chance came along.


“I had to catch up with the pace of the team and V.League 1 which is much faster than the V.League 2,” Xuân said.


“I am under pressure when replacing Hậu in defence. As a substitute, I have to show that I am better, more useful and work more effectively than him.


“But pressure also makes me push harder. I watch different players and learn the best skills from them. I am lucky to have the opportunity to play in a strong team that help me to play better. I still need to practise a lot.”


Xuân was first called to Park’s U23 team in 2019 for the Asian championship’s qualifier. He was also a substitute for Việt Nam’s 2022 World Cup campaign early this month before joining the ongoing U23 event in Kazakhstan.


“I am totally a team player. I think that individual performances mean nothing if the team’s result is not good. Players should do best for team’s winning which is the key in football.” 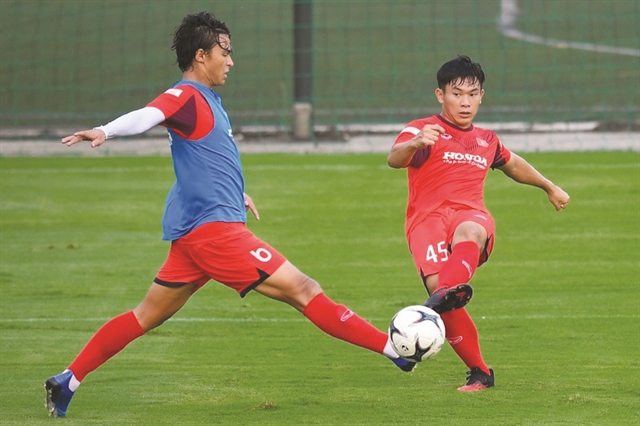 Lê Văn Xuân (right) training for the U23 Asian Cup in Kazakhstan. Photo courtesy of VFF


After 10 years in the game, Xuân said he still has it all to do but believes earning a regular place in the national team is his major goals right now.


“My targets will be an official place in the U22 team to compete at the 31st SEA Games and the national senior squad at the AFF Cup in December. I know, it will be difficult but I will do my best to make it a turning point in my career,” he said.  VNS