After the Golden Bridge, Sun World Ba Na Hills introduces a new project Grand Cascade with more than 40 golden statues, promising to delight visitors on the occasion from April 30 to May 1.

Grand Cascade is a new cluster of artistic sculptures with the theme of ancient Greek mythology, located in Sun World Ba Na Hills (Ba Na, Da Nang). The sculptures were created by investor Sun Group on behalf of Frili Gallery – a renowned Italian family of bronze casting and marble carving with over 150 years of history.

“With the philosophy of bringing the world back to Vietnam and bringing Vietnam to the world, Frilli and Sun Group collaborated to research, select and create model statues in Ba Na Hills that simulate the Grand Cascade fountain.” Frill Gallery representative said.

The Grand Cascade is the largest fountain system in the Peterhof Palace, on the southwest coast of Saint Petersburg. The building was commissioned by Peter the Great in the early 18th century.

In Old Morin Square, amid the complex of ancient European architectural works of Ba Na French Village, Grand Cascade is like a “golden pinnacle”. More than 40 life-size statues — mimicking works kept in major museums around the world — are set up in the steps of the waterfall. Admiring the golden statues in the Ba Na sun, visitors seem to be lost in the “great banquet of the gods” in the myth. 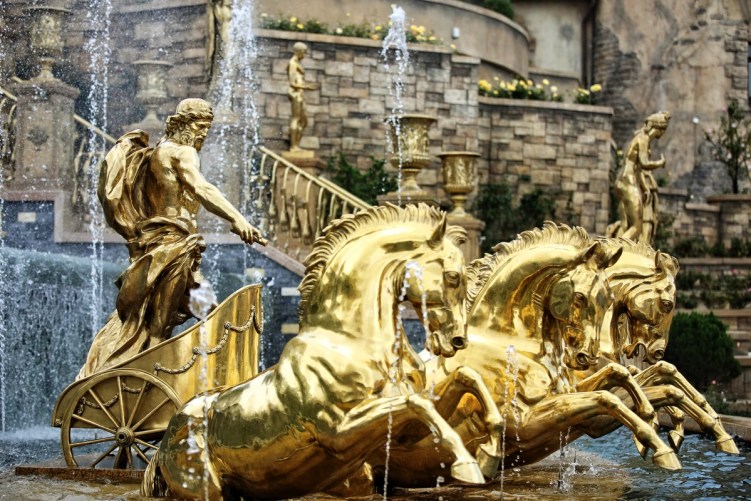 The most prominent of the ensemble of gold statues at Grand Cascade is the central cluster of statues by the fountain, where the sun god Helios pilots the chariot drawn by five steeds. Seen from afar, viewers have the feeling that the horse’s hooves are kicking on the waves, flying, jumping forward. Thanks to the delicate combination, the static image cluster contains a particularly dynamic element.

Grand Cascade promises to become a new destination for tourists when they stop in Da Nang. Along with the Golden Bridge, this is also a project that is expected to put Vietnam on the world tourism map.

A representative of Sun World Ba Na Hills said that in addition to Grand Cascade, from April 30 to May 1 to the end of the year, the Asian theme park will be added with a range of international standard experiences, including 5D cinemas and 2 Airship cinemas; the traditional wooden carousel of the European Middle Ages; traditional bonus game booths; show “War in the Kingdom of the Moon”…