Notably, Australia is one of the first countries to commit to supporting COVID-19 vaccines for children ages 5 to 11, with about 7 million doses expected and the first 1 million coming to Vietnam by the end of this week. † This is a very timely support for the current childhood vaccination campaign in Vietnam, which makes a practical contribution to the reopening of schools and thereby contributes to the promotion of education, the prime minister stressed. Vietnamese education. 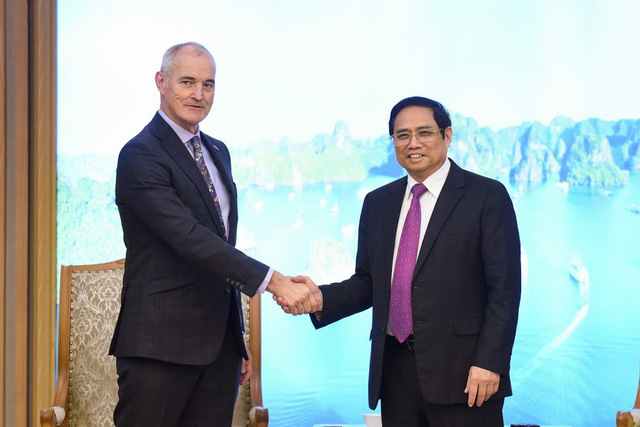 Prime Minister Pham Minh Chinh congratulated Prof. Alec Cameron has just been named President of RMIT University Australia and has chosen Vietnam as one of the first destinations after taking office. The Prime Minister stressed that Vietnam has always identified education and training as the main national policy, people are the center, subject, goal and driving force of development, towards rapid and sustainable development. mainly based on science, technology and innovation, with internal resources (people, nature, historical-cultural traditions) as fundamental, strategic, decisive, long-term, external resources important and groundbreaking.

In that vein, the Prime Minister highly valued RMIT University Vietnam as Australia’s largest investor in Vietnam and the largest foreign investor in education today. The Prime Minister also congratulated RMIT University on having been effectively active in Vietnam for more than 20 years, contributing to improving people’s intellectual standards, educating human resources, encouraging talents for Vietnam and creating a vibrant has become a symbol of international cooperation. education, training and people-to-people exchanges between the two countries.

The Australian Ambassador to Vietnam and Prof. Alec Cameron highly appreciated the results of epidemic prevention, human vaccination, reopening, recovery and socio-economic development of Vietnam; expressed his gratitude to the Government of Vietnam for always giving and supporting RMIT University over the past 20 years. GS. Alec Cameron pledged RMIT to continue to cooperate with Vietnam, talked about RMIT University Vietnam’s upcoming development plan, including its intention to increase investment capital by about 100 million Australian dollars in Vietnam and region, and expressed his wish that the Prime Minister would continue to support the investment and management conditions for RMIT University.

Prime Minister Pham Minh Chinh confirmed that the Vietnamese government always creates favorable conditions for foreign investors to operate in Vietnam, including RMIT University. , which became a model to attract more Australian companies to invest in Vietnam in the near future, RMIT and Australia proposed to increase the scholarships for Vietnamese students, contribute more actively to the training of personnel for Vietnam and the region, and to contribute to the further promotion of the friendship and strategic partnership between the two countries.