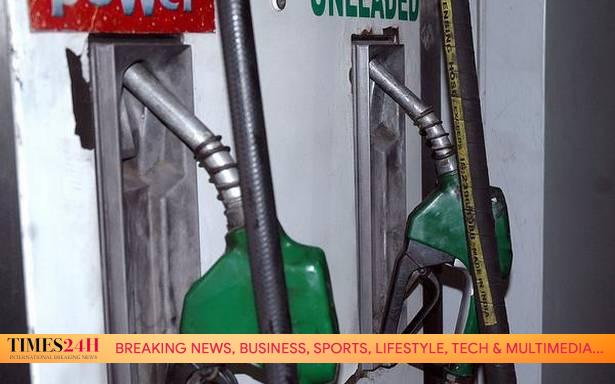 After Rajasthan, petrol price on Thursday crossed the ₹100 per litre mark in Madhya Pradesh after fuel rates were increased for the tenth day in a row.

Petrol price was hiked by 34 paise per litre and diesel by 32 paise, according to a price notification of State-owned fuel retailers.

While branded or additive-laced petrol, which attracts higher taxes, had crossed the ₹100-mark in some places in States like Maharashtra, Madhya Pradesh and Rajasthan, regular petrol crossed the physiological mark in Sriganganagar town of Rajasthan on Wednesday, and on Thursday it went past that mark in Madhya Pradesh.

Fuel prices differ from state to state depending on the incidence of local taxes such as VAT and freight charges. Rajasthan levies the highest value-added tax (VAT) on petrol in the country, followed by Madhya Pradesh.

Oil Minister Dharmendra Pradhan had on Wednesday blamed output cut by oil-producing nations for the rally in international oil prices that have translated into higher retail rates in India.

Demand recovery should take ‘primacy’ over oil prices at least for the next few months, he had said.

International oil prices have been on the boil since Saudi Arabia pledged additional voluntary output cuts of 1 million barrels per day in February and March under a deal between the Organization of the Petroleum Exporting Countries (OPEC) and its allies including Russia, a group known as OPEC+.

This has resulted in oil prices rising to $63 per barrel, the highest level in more than a year.

“The rising crude oil prices during the last few weeks is hurting the fragile global economic recovery due to significant demand contraction, which might even mirror the impact of COVID-19 in its initial stages,” Mr. Pradhan had said at the 11th IEA IEF OPEC Symposium on Energy Outlooks.

India, he said, had contained the inflationary pressures on several fronts but not those impacted by crude prices.

“The price-sensitive Indian consumers are affected by rising petroleum product prices. It also affects demand growth, which could potentially impact the delicate aspirational economic growth trajectory not just in India but in other developing countries as well,” he said.

Also, on Wednesday, Prime Minister Narendra Modi blamed India’s over 85% import dependence for the ‘burden’ the common man was facing.

In Sriganganagar, petrol price soared to ₹100.49 a litre on Thursday.

The record price in Rajasthan is despite the state government late last month cutting VAT on petrol and diesel by 2%.

Diesel in Sriganganagar is priced at ₹92.47 a litre.

The relentless hike in prices has been criticised by the opposition parties including the Congress, that has demanded an immediate cut in taxes to ease the burden on the common man.

Mr. Pradhan last week had told Parliament that the government is not considering a reduction in excise duty to cool rates from their record highs.

Central and State taxes make up for 60% of the retail selling price of petrol and over 54% of diesel.

The Union government levies ₹32.90 per litre of excise duty on petrol and ₹31.80 a litre on diesel.

Retail petrol rates have risen by ₹20.29 per litre since mid-March 2020, after the government raised taxes by a record margin to mop up gains arising from fall in international oil prices. Diesel rates have gone up by ₹17.98.