Apple’s manufacturing partners in Vietnam have increased compared to 2020, but still account for only a small portion of the supply chain.

Apple has just released a list of its suppliers for fiscal year 2021 (ends September 2021). This report reveals 180 companies, accounting for 98% of Apple’s direct costs for materials, manufacturing and assembly worldwide.

Of these, 25 partners have factories in Vietnam, which corresponds to 14%. This number is higher than the same report for 2020, with 21 companies, or 10% of the total number of Apple partners.

In fiscal year 2021, Apple added 5 new partners with factories in Vietnam and eliminated one company (Foster Electric, which has factories in Binh Duong and Da Nang). Apple has chosen Vietnam as a place to switch its supply chain from China to avoid reliance on this country. Photo: Forbes.

In addition, this list also adds Luxshare Precision’s factory in VSIP Industrial Park (Hung Nguyen District, Nghe An), which has been in operation since 2020. Before that, Luxshare produced Apple devices in Bac Giang.

Apple’s list shows that it still largely relies on Chinese partners and factories in the country. Apple has added 6 Chinese companies and dropped 7 companies in the past year.

However, the trend to leave China is still evident compared to the 2017-2020 period, when a third of Apple’s partners set up factories in China.

“Apple may reduce production in mainland China and increase its presence in India and Vietnam, but it is still very closely linked to the Chinese companies that make up the supply chain,” Isaiah Research analyst Eddie Han told SCMP.

In late September, a report from JP Morgan said Vietnam will become a key manufacturing area for Apple by 2025, with 65% of AirPods, 5% of MacBooks, 20% of iPads and Apple Watch.

Nikkei Asia sees this as a step forward for Vietnam in terms of manufacturing and contributing to the global supply chain.

However, at this time, all suppliers who work directly with Apple are Chinese companies and Vietnamese companies were not present. Therefore, Vietnam’s success in the manufacturing sector has attracted many other companies to build supply chains.

In addition, Nikkei said Vietnam has not yet developed a high-tech sector in the country, making it difficult for policymakers.

According to Nikkei Asia, Vietnam has a technology export growth rate that no other Southeast Asian country can match, with a share of high-tech exports of 42% in 2020, up from 13% in 2010. But very few of these exports contribute to the country’s economic growth. 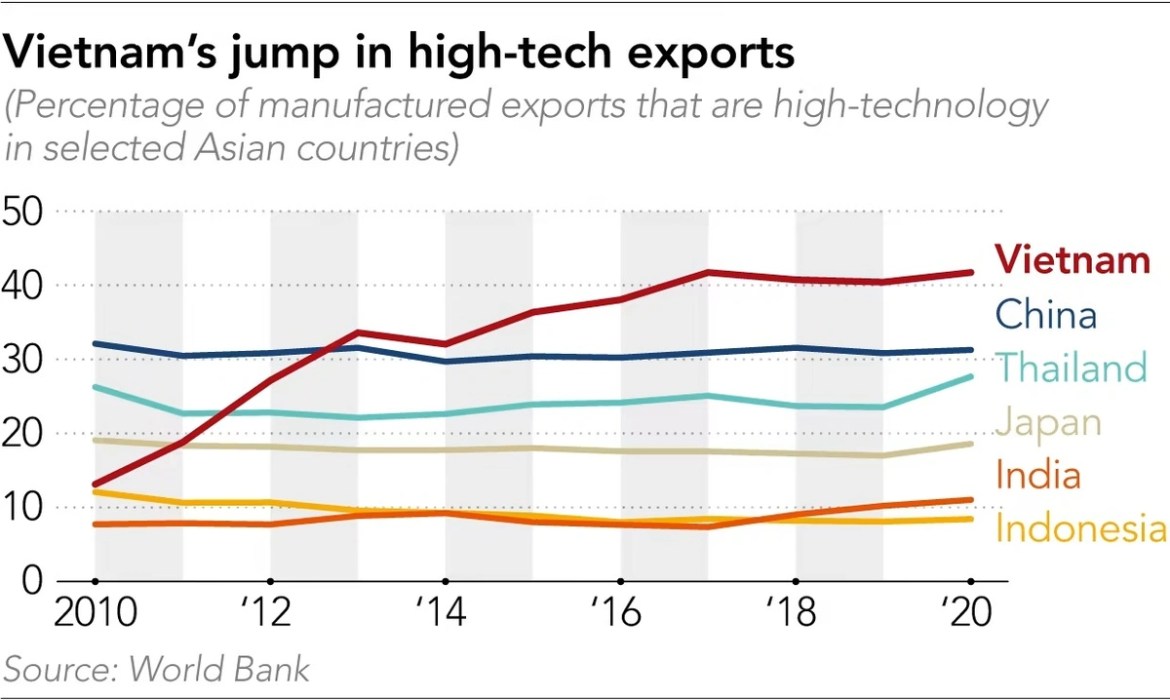 The amount of technology exports from Vietnam has increased sharply in recent years. Photo: Nikkei Asia.

However, most of the Vietnamese manufacturing industry can only assemble for major brands from other countries.

In the 2020 list of top suppliers of Samsung Electronics, the group only mentions foreign companies in Vietnam, although it has been operating in our country for 14 years and half of its smartphones are produced here.

Nikkei Asia judged that Vietnam has many advantages over other countries, such as a highly disciplined, cheap labor force and good economic development policies. However, our country also has many other obstacles such as unqualified labor and lack of technical equipment.

Economist Phung Tung, director of the Mekong Development Research Institute, said that if it succeeds in the manufacturing industry, Vietnam will become a serious competitor to regional manufacturers such as China’s Oppo or Malaysia’s Silterra chipmaker.

But if it fails, Vietnam will forever be “stuck in the factory”, causing the economy to become overloaded, stagnate and unequal or plunge into a debt crisis. In order not to fall into this tragedy, expert Phung Tung said Vietnam should soon find its place in the global trade strategy race.