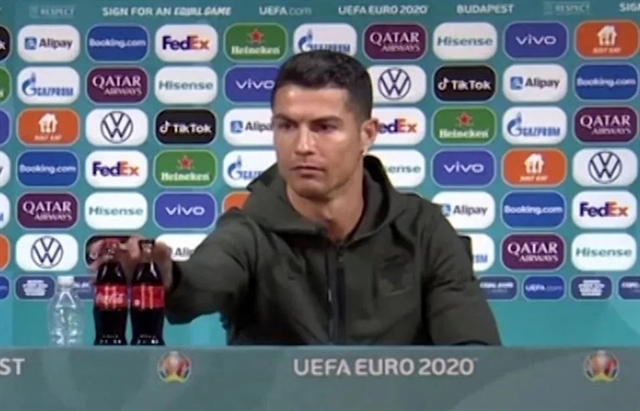 
I’m not really a big fan of Coca-Cola.


I’m not talking about the company, rather the drink itself. Other than providing a perfect cure for a hangover (“call the doctor in the red ambulance”) you’ll rarely find me drinking it.


Now I doubt the CEO of Coca-Cola would lose any sleep if he happened to read this column, and I think it’s safe to say their share prices won’t be affected because Coke isn’t really my cup of tea.


Cristiano Ronaldo, on the other hand, has far more sway than I do.


At a press conference ahead of Portugal’s European Championship game against Hungary, the Juventus player removed two bottles of the above-mentioned beverage from in front of him and then held up a bottle of water suggesting that was a better option than the sugar-laced, carbonated drink.


Soon after this 10, maybe 15 second, show of disdain, there was a US$4 billion fall in the share price of the drinks company.


Not quite what Coca-Cola had hoped for when they agreed to be a major sponsor of the football tournament.


With a staggering 300 million followers on Instagram, it’s safe to say Cristiano is a pop culture giant and the ultimate influencer.


He followed up his soda protest by scoring twice for his country in their 3-0 win in Budapest. Incidentally, moving ahead of France’s Michel Platini as the competition’s leading ever goal scorer with 11.


No doubt there will be more goals to come from the number 7 as for me, Portugal are one of the favourites to go all the win and retain the prize they collected in France five years ago.


At 36-years-old, some think this may be Ronaldo’s last ever Euros, but as long as he stays away from the sodas, I wouldn’t rule out him playing again.


He is a renowned health fanatic and keeps himself in absolute perfect shape. I saw an interview with him from a few years ago when he was asked if his son had what it took to follow in his father’s footsteps and become a professional footballer.


Dad replied: “Not yet because he drinks Coca-Cola and Fanta sometimes.”


I’ve argued before why I believe Ronaldo is a better player than Lionel Messi, and I don’t need to waste too much time stating my case over again.


Coca-Cola may not be calling him anytime soon to offer him a bucket full of money to star in their next advertising campaign, but on the pitch, Messi aside, I don’t think anyone really comes close.


The longevity of footballers is increasing. More and more are playing well into their 30s because they stay in such great shape.


Ronaldo is living proof that while talent is obviously a major factor, looking after yourself is key to keeping going.


That’s why, no matter how much money Coca-Cola were willing to pay to have a few bottles on a table at a press conference, maybe it’s not the right message to be sending to young wannabe footballers. VNS

Vietnam to be the world’s biggest garment exporter