Which messaging app is the most popular in every country in the world?

According to analytic data on the Android platform (May 2022) from 90 countries, Similarweb has identified the most popular messaging apps worldwide.

Of the countries surveyed, whatsapp excelled as the best messaging app in 60 countries with over 2 billion users.

With excellent features, WhatsApp quickly attracted a large number of users around the world. Just connect to 4G or WiFi, you can chat, send videos and photos and communicate internationally for free. 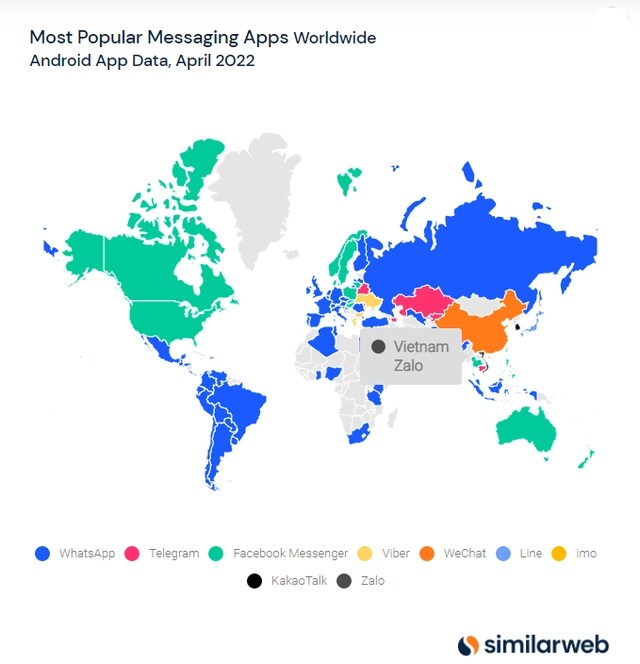 The number of users of messaging applications worldwide.

Facebook messenger comes in second on the list, pushing Telegram to third. As of April 2022, Facebook Messenger is still the most popular messaging app in 13 countries, including the US, Australia, Canada, Denmark, Hungary, New Zealand, the Philippines, Poland, Sweden, and Thailand.

Facebook Messenger is also one of the most popular messaging apps in Vietnam. Messenger’s popularity is largely due to the fact that it is a messaging application associated with Facebook – the most widely used social network in the world. Currently Messenger offers a completely free service.

The messaging app Telegram has lost its popularity from 2021. As of April 2022, the app ranks first in 8 countries.

Telegram is a free and cross-platform Russian messaging, video calling and file sharing application launched in 2013. Shortly after, this application became one of the popular internet messaging applications. most famous in the world with more than 700 million users worldwide to date.

Telegram also does a great job of managing spam messages, ads (which can be considered nonexistent) on the platform, and supports sending files weighing up to 1.5GB. However, the application currently does not support video calling.

In addition to Messenger and Telegram, viber is another messaging application known to many people. Viber is one of the most widely used free chat applications in the world, especially in Europe. It is estimated that more than 1 billion people currently use Viber to exchange information and share documents.

Viber is quite a popular application in Vietnam. Launched in 2012, the application has a striking interface, is easy to use and has good call quality. The valuable point of Viber is its popularity in the international market. If two strangers from different countries meet and want to exchange contacts through OTT, Viber is easier to use.

Line is growing in popularity across Asia as evidenced by its strong presence in both Thailand and Japan. Line is also thriving in the country of Singapore.

Apps that only claim one country are KakaoTalk (Korea), WeChat (China), and imo (Qatar) and Zalo (Vietnam).

Recently, the most popular OTT application in Vietnam, Zalo , has officially launched 3 monthly subscription packs for users in Vietnam while still releasing a free version but limited in terms of features. feature.

Specifically, individual users who want to use the full features can upgrade to 3 paid packages including Standard, Pro and Elite. At the moment, however, Zalo only allows registration to test the Pro package for 5,500 VND/day (free trial until the end of August 30) with the benefits of 120 search results per month. , 120 chats with strangers, phone book support up to 3,000 contacts…

Immediately after the information about the fees became available, many users started to “turn away” from Zalo and switched to using other free messaging platforms, such as Telegram, Viber, Messenger …