Alongside the new look, the update introduced other minimal enhancements and features elsewhere in the app. 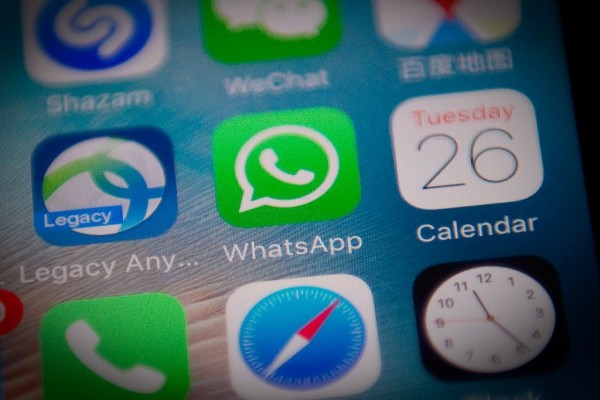 (Photo : by NICOLAS ASFOURI/AFP via Getty Images)
This photo illustration shows the Whatsapp application logo (C) on a smartphone screen in Beijing on September 26, 2017. – Chinese authorities appear to have severely disrupted the WhatsApp messaging app in the latest step to tighten censorship as they prepare for a major Communist Party congress next month.

On July 13, WABetaInfo reported that WhatsApp first hinted at these changes on its 2.21.140.11 beta release on TestFlight.

It added that one of the new interface features is similar to what FaceTime users see.

Moreover, it is also worth noting that the said beta features were exclusively introduced to WhatsApp beta for iOS. However, the outlet claimed that beta users for Android will also be getting these functions “very soon.”

The new video calling interface of the popular messaging app enables users to add people to an ongoing call, which was not available before the recent update.

As such, if ever a user missed the initial ring of a group call, he or she could still be included in the outgoing call without any problem.

Meanwhile, 9to5Mac reported that if ever a user is planning to join an ongoing call, there will be an alert that will allow a person to enter the call without asking the other participants.

The new update also allows call participants to either leave and rejoin a group call without a hassle. This feature could be handy for some users who have a bad internet connection and needed to go back to the outgoing call.

As such, they will no longer have to bother other people in the group conference to be back at it.

Read Also: WhatsApp Chat Could Soon Be Transferred to Other Phone Numbers to Make it Easier to Back Up Files

One of the interface changes of WhatsApp for iPhone looks like a feature straight out of the built-in video messaging app of Apple.

WhatsApp is currently rolling out a new interface for video calls. It now shows participants of the group call below the speaker on/off, enables/disables video, mute, and end call buttons.

Additionally, the list of participants below the interface includes a new button that allows users to “Add People.”

It is to note that previously, WhatsApp only displayed photos of the participants in the center of the interface. Now, it flaunts a FaceTime-like functionality.

WhatsApp for iPhone: Other Updates

As per NDTV, the WhatsApp for iPhone further improved the archived chats feature in its latest update. As such, archived and muted threads will remain that way even as the person on the other end sent new messages.

WhatsApp further introduced changes for its sticker suggestions, helping users see more relevant choices based on what they have already downloaded.

Elsewhere, WhatsApp for Android has already included an option for photos and videos to disappear.

Meanwhile, here’s how to share a screen on FaceTime even when you’re using a Windows PC.

Life Under Lockdown: The Last Video Before The Complete Shutdown